For $55m (yesterday) you could have owned a small licensed 14.5k sq. ft. weed grow in Hamilton, Ontario, a 250k sq. ft. greenhouse ready early next year, a 600k sq. ft outdoor grow facility due to come online at the same time, and an 867k sq. ft. indoor facility in British Columbia due to open mid next year.

That’s pretty damn cheap, but no matter what the company has tried to achieve, it’s inability to tell its own story to a wide number of investors had led it to drop, and drop, and drop, month over month, for a year now.

As others were propelling to absurd new highs on similar news, Beleave couldn’t get themselves arrested. They were unintentional ninjas, disappearing from view, even as they yelled and waved their arms.

So, today, they did something absurd and desperate and ridiculous.

Beleave Inc. has arranged for a seven-for-one share split of the company’s issued and outstanding common shares. Each shareholder of record of the company as of the close of business on the record date will receive six additional shares for each share held on such date.

A stock split? Who does that?

BMRC stock is selling at $85 per share and trending higher, so a split makes sense if you want to keep things affordable.

Beleave stock was selling for $1.15 before the split. If that’s not affordable to you, I’ve got a load of blockchain stock I’m trying to find a buyer for.

Andy Wnek, Beleave chief executive officer, said, “Our stock is already affordable and liquidity will free up additional shares to trade, which in turn helps Beleave realize its true value.”

Liquidity? I’ll say. There were 59m shares out before the split. There are 419m shares out now, and the day’s trading volume has tipped 21.7m shares changing hands.

But that volume comes at a price. A Stock split at this price means:

1: Every half cent tick up or down for BE will mean a bigger percentage jump (or dive), which investors will appreciate

2: It will require a whole lot more trading volume to move that stock in any direction, which investors will not appreciate

3: Institutional investors, who have rules about not being involved in stocks at sub-$1 levels, may bail – or be less inclined to one day get involved 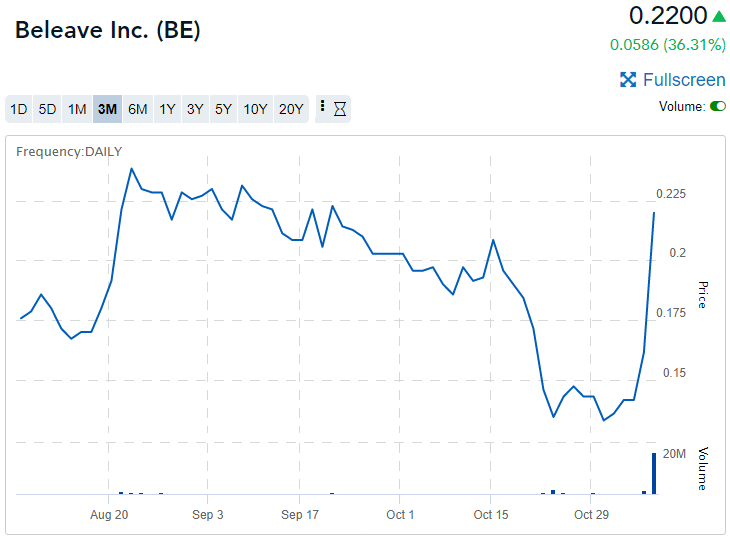 Whether you think the split is cannny or ridiculous, it’s worked. The company has jumped from a 58m valuation to a 94m valuation in one morning of trading, and the market is high fiving itself for being such a smart pack animal.

Namaste (N.V) infamously vowed it would be buying its stock back earlier this year to tighten its share base, shortly before taking on a financing that actually diluted its share base.

Cruz Cobalt (CUZ.V) rolled back from the $0.67 range to $0.22 in late 2016, almost entirely because the guys running the deal were ‘more comfortable in the teens than the dollars’, and knew how to run a volatile deal better than a runner.

Warren Buffet’s Berkshire Hathaway (BRK.A) has never split its stock, no matter how high it goes (it sells for $318,338.00 currently), and that inaffordability is actually seen by many as a reason to own some. When you get to the BRK AGM, you know you’ve made it, and you’re surrounded by fellow ‘made it’ types.

But down here in the penny stock trenches, the animals tear at every carcass hard, without questioning whether they should be. Beleave is today’s tear-apart. Tomorrow, profits will be realized and the pack will move to pastures anew, unless the execs at BE can drop fresh meat in the way of big news.

For those execs, the question going forward will be, can they capitalize on this new attention and keep the momentum going, or will this be a momentary chart spike that will be tough to explain going forward, with a share price that is less attractive to institutions than it was a week ago?

Beleave isn’t a bad deal, it’s doing the heavy lifting and chasing what all of its competitors are doing. It’s in that meh middle ground, but with a cheap buy-in price that should have decent upside, even after this lift.

But when you pull off an onside kick, the game isn’t won just yet. You still need to march the ball downfield and get it in the end zone. That’s where Beleave hasn’t been up to the task, of late.

Clock is ticking. Let’s see what they can do.

FULL DISCLOSURE: Equity.Guru has no commercial relationship with Beleave and the author holds no stock in the company.