Rick Rule, President, and CEO of Sprott US Holdings Inc talked about Africa with Tekoa Da Silva in a recent interview where he characterized the continent as one of the last great exploration frontiers.

Rick Rule: Tremendous Discoveries In “One of The Last Great Exploration Frontiers

According to Rule, political and social challenges have been holding Africa back as an investment destination. That is changing. A younger generation of Africans wants an improved standard of living. They are demanding an improvement in governance; improvements which will inevitably mobilize investment dollars their way.

As a place to [discover] world-class deposits, I would suggest to you that Africa and Central Asia are the last great frontiers [for resource exploration]. Political and social challenges have kept them from being as thoroughly explored as Western nations.

Nexus Gold Corp (NXS.V) has chosen Burkina Faso as its mining destination of choice on this vast under-explored continent.

Burkina Faso is a gold-rich country home to dozens of producing gold mines operated by some of the biggest names in the mining world. 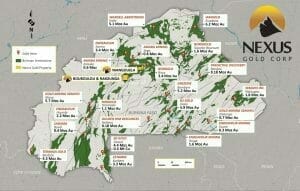 It’s important to note that Burkina Faso is one of the fastest growing producer countries in Africa. No less than eight new mines have been commissioned there over the past six years.

Rakounga: a 250-square kilometer concession sharing a common border with Bouboulou. Two of the three identified gold trends on Bouboulou appear to trend onto this concession. In 2017, Nexus drill tested three zones located near active artisanal mining areas, confirming the presence of gold mineralization at all three. All 10 holes drilled at the Koaltenga zone intercepted gold.

“The Company aims to establish a proximal relationship between the five identified zones at Bouboulou and the three zones located at the western edge of the Rakounga property. The area represented between all of the drill tested zones is approximately 16 kilometers and if continuity is established, represents a sizeable mineralized footprint.” More on this below.

Equity Guru’s Lukas Kane has covered Nexus Gold extensively. Some of his more recent insights can found via the following link:

For the remainder of this article, we’ll focus our attention on the company’s Rakounga project, and how it ties in neatly with their Bouboulou concession.

“The survey was designed to investigate the gold-bearing potential on the permit ground occurring between the Koaltenga gold zone, located near the western boundary of the Rakounga concession, and Pelatanga-Rawema gold trend, on the Company’s adjacent Bouboulou exploration permit.” (see map below) 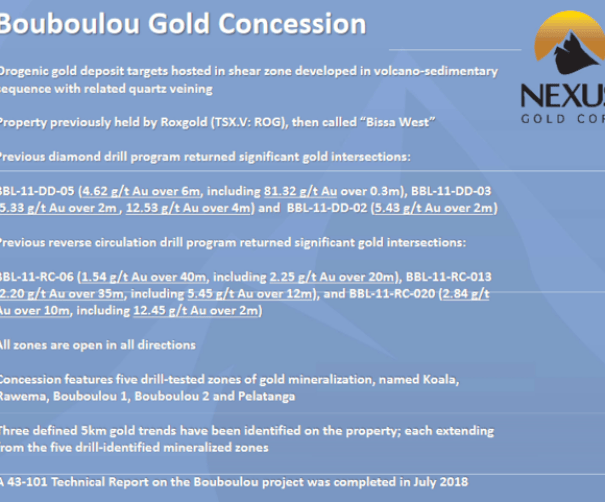 The results from this survey highlight an anomalous gold trend which extends roughly 7,000 meters along the southwest-northeast axis and swells to widths of up to 2,500 meters. This newly identified trend lines up with the 5-kilometer Pelatanga-Rawema trend previously identified on the adjacent Bouboulou concession. The company now has a mineralized footprint at the combined Bouboulou-Rakounga concessions which exceeds 15 kilometers in length.

Commenting on the significance of this new geochem data, Nexus President and CEO, Alex Klenman stated…

The goal of the soil grid program was to establish continuity of the gold trends at Bouboulou onto the adjacent Rakounga concession. The results indicate a sizeable trend extends from the northeast of Bouboulou to the southwest of Rakounga. We’re pleased with the results, that’s a big footprint, and suggestive of the potential at Rakounga.

Senior Vice-President of Exploration, Warren Robb also chimed in with…

It is impressive how the geochemical data highlights the gold trend coming off the Bouboulou ground. We will combine this data with the regional geophysics data to identify any coincidental anomalies, and then look to test those anomalies along the trends.

The company reported initial results from the first few holes of a 4,000-meter drilling campaign launched a few months back – 2000 meters of reverse circulation (RC) drilling at Rakounga and 1000 meters each on their Bouboulou and Niangouela concessions.

The goal of this phase of RC drilling was to step out from the Koaltenga gold zone to better define and extend the mineralized structure.

Highlights from this step out drilling include: 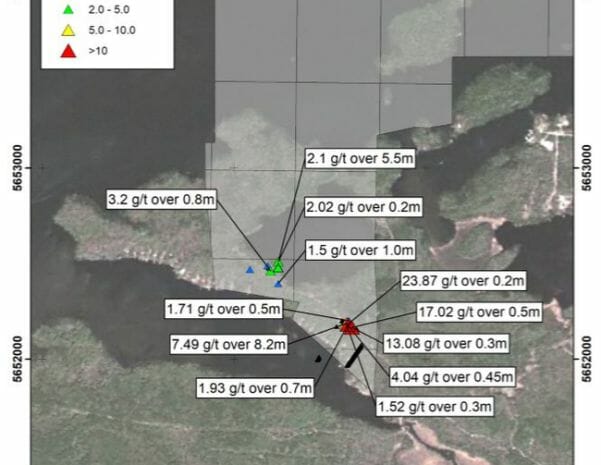 This is a prominent structure that we’ve found. The results of the first few holes from the recent program, combined with our soil-grid geochemical program and re-interpretation of the Regional Geophysical data, outline a coincident anomalous gold trend extending for at least 1200 meters. This is a significant development and we will execute additional groundwork to determine the parameters of this expanding zone.

The assays from these first few holes are not exactly eye-popping, but they are constructive. And they do have the potential to add tonnage as the company aims at producing a compliant resource estimate in the coming months.

Additional drill hole assays are pending. I wouldn’t rule out thicker higher-grade hits from the next batch.

Summing up this recent news drop…

To date, eight distinct gold zones over the combined 288 square kilometer project area have been identified, sampled and drill-tested.

The company has barely scratched the surface where these two concessions are concerned.

Only a few months back the company tabled an $825,232.50 private placement (PP) at $0.25 per unit (each unit contained one share + one $0.35 1-year warrant). The current stock price allows you to pick up shares at less than one half of that recent PP price.

Full Disclosure: NXS is an Equity Guru client. We own stock.