Sold out: Which Canadian cannabis brands are winning on day one? 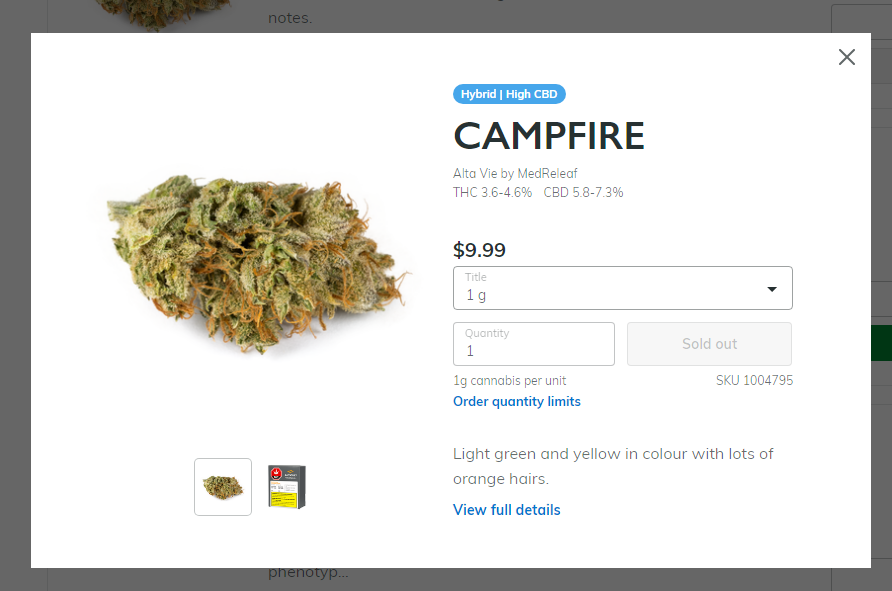 Recreational cannabis is legal in Canada, praise Jesus. But anyone who thought pre-rolls would be falling from the sky on day one is living in a fantasy world. Queues are long, stores are already running out of hot sellers, and online traffic is proving hot with looky-loos.

Assuming you can find a store that is selling today, here’s what it looks like inside: In BC, it’s a Best Buy of weed products. 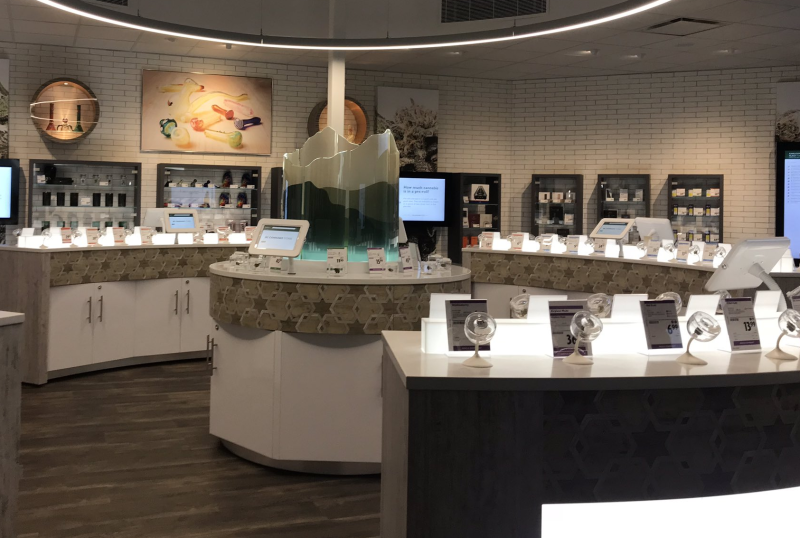 The close-up of where you’ll actually see any evidence of branding is important: 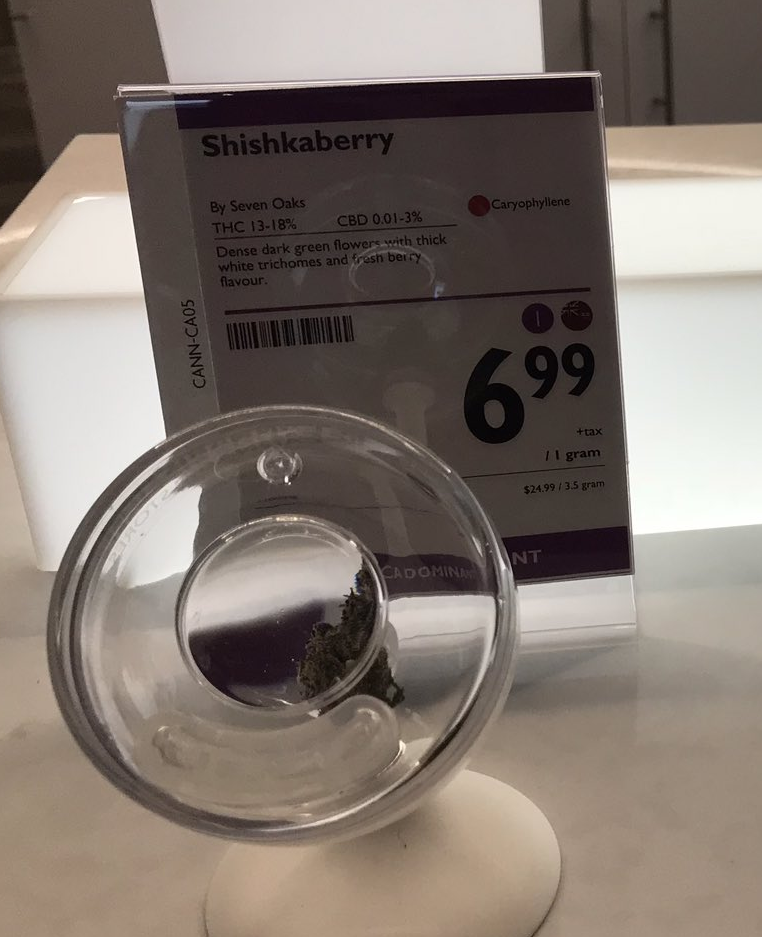 Good luck promoting yourself to that consumer base, Seven Oaks, when you get a tiny mention on a generic price board, no logo, and no packaging on display.

What’s more interesting is the biggest item on that board:

The $6.99 price tag font is bigger than anything else you can see, so what can we deduce from that?

The Vancouver Sun is already on it:

On Wednesday morning there were no major problems with the user-friendly B.C. Cannabis Stores’ website, though some of the cheaper strains were not available in 1 gram amounts as of around 5:30 a.m.

The “THC Hybrid,” for example, which costs $6.99 a gram, was only available in 7 or 3.5 grams but not in 1 gram. The same for another strain called Landrace.

[BC Premier] Farnsworth said he was pleased the website “did not crash” and that “so far it was performing as we hoped it would.” 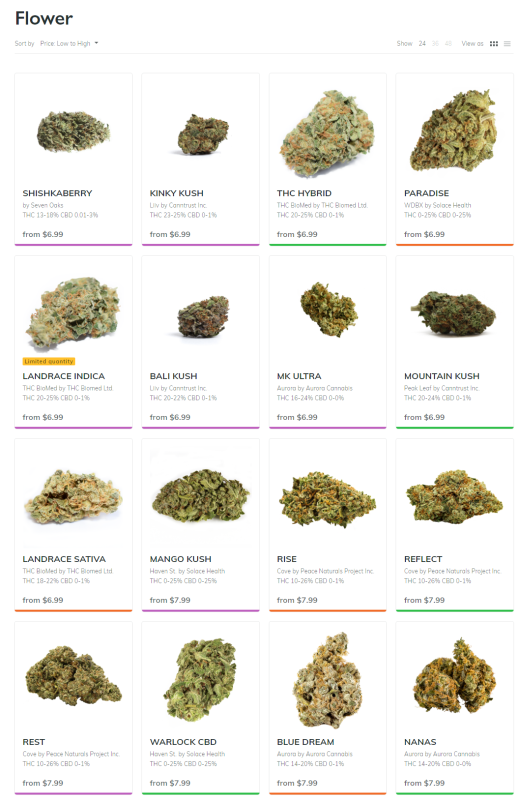 All the work to develop funky logos, cool names, the test marketing, the NY design agencies, it’s all out the window, as the new regulations require plain packaging and dryer-than-shake marketing.

But we’ve found something else in the early data, and it’s something the LPs have clearly not seen coming: High CBD products, which number about one in every fifteen strains listed, are almost entirely sold out, across the country.

The BC provincial online store is just about out of CBD-dominant strains, while their 1:1 blends are also selling out more quickly than anyone expected. The Government of Canada specifically advises consumers to smoke 1:1 blends, but they almost certainly never thought we would actually listen.

In Ontario, the only CBD-dominant strains that ARE in stock start at $13.85 per gram – showing that nobody wants to get ripped off AND listen to what the Government says. The price-competitive options are either sold out or will be by the end of today.

The supplier tilt towards THC-focused options is mind-boggling, in hindsight. 49 strains of THC-dominant flower are posted on the ONT website, while only two strains of high CBD product made the cut.

British Columbia is no different. They are carrying a total of 20 strains of flower that have even nominal amounts of CBD, out of a whopping 150 strains to choose from. Of those 20 strains, most balanced strains are at low quantity already, and there are ZERO CBD-dominant strains, at 2pm local time. Day 1 is a fire sale.

Stock’s low, but don’t think that you can just roll up to the Aurora website proper and order some of the high CBD Temple flower that’s sold out in BC right now – they don’t have it available either, and they grow the stuff.

This is all a massive signal to the LPs that they might want to think about their product mix a little.

What this means for the future is, likely, that we’re going to see price competition. In other words, a race to the bottom. 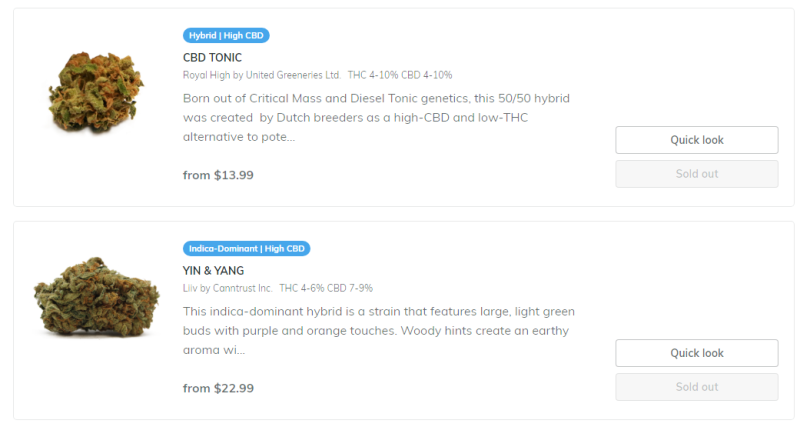 CannTrust does have some of the Yin and Yang product marked as sold out on the BC stores website above available for sale on their own medical site, but they sell it for $5 more per 3.5g than you’ll get it from the BC government for.

How many of these companies are going to be eager to refill the BC cannabis Store shelves with discounted product when they can use that ‘sold out’ sign to lure customers to their own medical-based websites and charge a premium?

You can expect to see a host of public companies putting out news releases, boasting of their early sell outs on day one, but that’s not necessarily going to be indicative of big business being done, or of long term trends. If I can’t buy the $6.99 strain, then I’ll buy the $7.50 strain, and then the $8 strain, until all that’s left is Tilray’s Rockstar for $35.

On the BC Cannabis Stores‘ website, the most inexpensive strain is CannTrust’s Kinky Kush which retails at $6.99 per gram and contains 23-25 percent THC and 0-1 percent CBD. Conversely, the most expensive strain is Whistler Cannabis‘ CBD Shark which retails at $56.99 per gram, containing 6.6-6.7 percent THC and 9.8-10.5 percent CBD.

But what will I come back for?

What we can reasonably extrapolate from what we’re seeing today is, the average customer is not an enthusiast. Smaller 1g weight sales are being snapped up before 3.5g and 7g options, so we can figure customers are giving things a try and are not yet prepared to make a big investment in mystery product.

They’re likely an older customer who doesn’t already have their own supplier, and they’re looking for CBD based pain/stress relief more than a blown mind. They are likely an older consumer looking for something they can break out now and then when guests are around, maybe alongside a sassy pinot noir, rather than the choofing nug maestro who knows what Blueberry Diesel Head Implosion kush will do to you.

THE OTHER SIDE OF THE MARKET: DISPENSARIES

There are some provinces that have allowed private sellers to set up their own online sales portals and retail outlets, such as the prairie provinces of Saskatchewan and Manitoba,

Those are being pounded out as well, but at least they’re setting their own prices and building potential repeat business.

Saskatchewan has a number of licensed private retail stores, although none of them are currently selling cannabis.

Winnipeg cannabis store, Delta 9, showed on its website at 4 a.m. Wednesday that marijuana products were completely sold out.

One would-be pot customer told Global News they tried to purchase pot at 12:01 a.m. from the business but found most strains were sold out already.

The store had 100 orders in the first minute, said Gary Symons, Delta 9’s communications director, and they sold $50,000 worth of product in the first hour.

Delta 9 (NINE.C), which I’ve never written about, ever, is one of a handful of Manitoba players, including HIKU/Tokyo Smoke (HIKU.C), Canopy Growth Corp (WEED.T), and National Access Cannabis (NAC.V). Those guys are going to be able to control their own destiny.

On Delta 9‘s website, the most inexpensive strain is the LBS – Sunset from Canopy/Tweed. $11 will get you 23 percent THC and <1 percent CBD, though you’ll have to wait until the website restocks.

The most expensive strains are Delta 9’s house brand of cannabis. Broken down per gram, the product costs the same as the other top-tier strains on the site but it only comes in a five gram bottle. Delta 9’s Sensi Star and Diesel both cost $60 and contain 18 percent and 13-16 percent THC, respectively, with both containing <1 percent CBD.

In Quebec, Tilray’s Grail Rockstar and Headband strains are the most expensive at $35.30 for 3.5 grams. Rockstar has 20.7-25.3 percent THC while Headband contains 18-22 percent THC. Neither strains contain CBD.

The most inexpensive strain is harmoniser by Solei. At $8.50 Harmoniser contains 5-6 percent THC and 8-12 percent CBD.

New Brunswick’s online website, Cannabis NB, has strains which range from $8.99 per gram to $12.99 per gram. The most expensive flower is the DNA Genetics‘ Lemon Skunk which has 13-22 percent THC and 0.07 percent CBD.