Aben Resources (ABN.V): Assays from 24 drill holes are on deck – newsflow into December 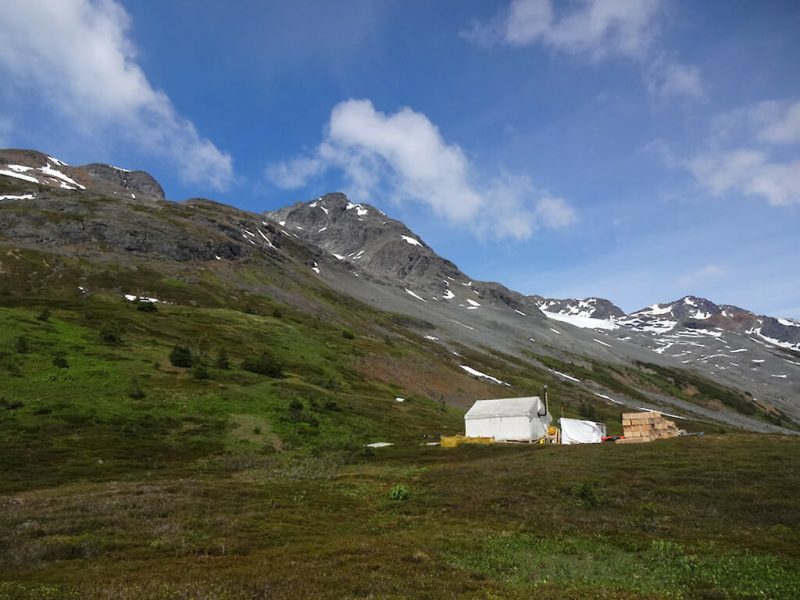 Aben Resources (ABN.V) is one of the more aggressive ExplorerCo’s active in BC’s Golden Triangle.

The company has been covered here at Equity Guru in a number of recent articles:

Generally speaking, when a company releases assay related news and does not include actual numbers in the headline, the results are unlikely to spark a buying spree in the company’s shares.

In some cases, the market fails to consider the greater meaning behind what might otherwise appear as bad results. These ‘bad results’ can sometimes lead to a greater understanding of the geological controls underlying an area of interest. This is especially true with first pass drilling campaigns.

These apparent dusters might best be characterized as a technical success.

The three holes at South Boundary were collared on the periphery of a large gold-in-soil anomaly that is coincident with high gold-in-rock values and adjacent to an electromagnetic (“EM”) geophysical conductivity anomaly identified in the mid-1990’s (drill hole summary below). Only a very small portion of the anomalies have been tested with the current drill holes so the potential for further discovery of precious metal mineralization remains high and open in all directions. A 355-line km airborne magnetic survey was recently completed over the entire Boundary Zone with interpreted results expected soon. Aben anticipates that the large amount of drill hole, surface and geophysical data collected in the last two years coupled with a significant database of historical information will greatly assist in targeting expanded mineralization with future drilling.

I’d be lying if I said I was excited by this piece of news. Like the rest of the market, I seek short-term gratification where drilling campaigns are concerned. The South Boundary Zone was a mystery, one defined by a large gold-in-soil anomaly that sat untested, until this summer. My hopes were high.

But as the company stated, “only a very small portion of the anomalies have been tested with the current drill holes so the potential for further discovery of precious metal mineralization remains high and open in all directions.”

This isn’t just patter. The company plans to return to South Boundary next spring, except this time, they’ll be armed with a new airborne EM survey. CEO Pettit believes they nicked the edge of a mineralized structure with these recent holes. All of this additional data – the drill holes, the airborne EM survey – could dial them into something significant at South Boundary.

More importantly, the South Boundary Zone is NOT the big show.

Aben has now completed 9,900 meters of drilling in 36 holes at Forrest Kerr in 2018. The majority of drilling has taken place at the North Boundary Zone area where high-grade precious metal mineralization was discovered in 2017 and subsequently confirmed in 2018. There are 24 drill holes still to report on, all in the North boundary Zone.

The North Boundary Zone is what generated all of the excitement earlier this summer.

The results from this season have been well documented here at Equity Guru via the articles highlighted at the top of this piece.

With 24 holes yet to be reported from North Boundary, assays should continue to flow right into December.

Aben has two other projects in its portfolio:

The company’s ‘Justin’ project is right on strike with Golden Predator’s 3 Aces deposit. 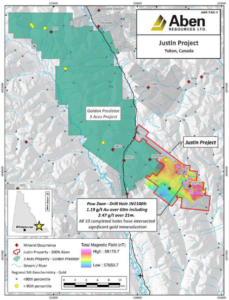 Assay results from trenching work performed on the project this past summer should drop sometime in November. 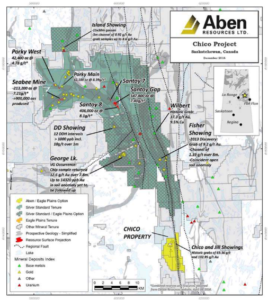 SSR is drilling some 40,000 meters, both infill, and exploration, in three areas across its extensive land holdings. Note the Chico project highlighted in yellow.

Aben is monitoring SSR’s progress in the area closely. 40,000 meters is a massive drilling campaign. Tuned into SSR’s discovery model, ABN should be well equipped when they put boots to the ground next February.

Those selling their ABN shares into the current weakness stand to miss out on what could be further high-grade intercepts from the North Boundary zone at Forrest Kerr. It’s possible that management, with a greater understanding of the high-grade geological controls in the area, has succeeded in dialing into North Boundary’s sweet spots. Time will tell.

Full disclosure: Aben is an Equity Guru client. We own the stock.