This Guru roundup is all about companies that are due to release results from drilling campaigns that were launched earlier in the year.

Though most of these companies can boast multiple assets at various stages of exploration and development, it’s their pending drill hole assays that I’m fixated on.

So with that bit of (transient) myopia laid bare, let’s take a look at a few prospects… 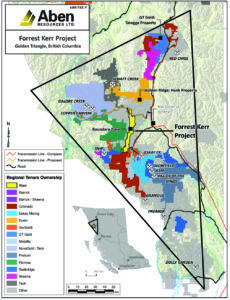 Two weeks back, Aben Resources (ABN.V) released highly anticipated follow-up assays from their Forrest Kerr project in the Golden Triangle of northern BC.

These were step-outs at the North Boundary zone.

As noted above, we’re awaiting additional assay results from 27 holes, 3 of which are from their South Boundary zone. I’m especially keen to learn what Aben has in these 3 holes at South Boundary.

Jim Pettit talks about Forrest Kerr in the link below. This, from last months Metals Investor Forum in Vancouver…

There are a fair number of moving parts to this story. Much can be gleaned from these recent Equity Guru features…

Aben could drop assay news at any moment. Stay frosty.

This initial drilling program consists of 1,200 meters and is targeting northern and southern extensions of the upper Main and West lenses between a depth of 500 and 1,000 feet from surface. 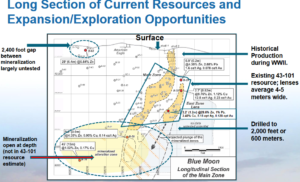 The company also states that there is significant potential to find multiple ‘Blue Moon’ style deposits along strike.

An update from this drilling campaign could come at any time. We shouldn’t have long to wait for the first set of assays.

Of interest, the company has also sent old core to the lab – intervals from a previous operation that contain massive and semi-massive sulfides. This core will be assayed for the first time.

The metal values in both old and new core could impact the current resource in a very positive way.

Additional insights regarding Blue Moon can be gathered here, in the following Equity Guru articles…

Results from a 61-hole, 1,029-meter reverse circulation drilling program at their Ivana Uranium-Vanadium deposit are on deck. 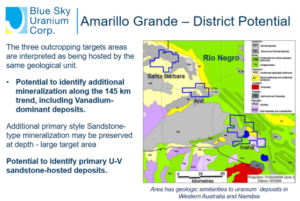 The fact is, Ivana is largely a surficial deposit. It begins right under your feet. What Ivana lacks in thickness, it more than makes up for in lateral scale. The sprawl-potential at Ivana is considerable.

Results could come at any time. The company’s share price has firmed up nicely in recent sessions, perhaps in anticipation of these pending assays.

Greater knowledge regarding this highly strategic uranium-vanadium district can be gained here, in the following Equity Guru pieces:

Boreal Metals (BMX.V) is a dynamic exploration and development company focused on Scandinavia. They boast no less than eight highly prospective irons in the fire, any one of which has the potential to dramatically alter the company’s market-cap. 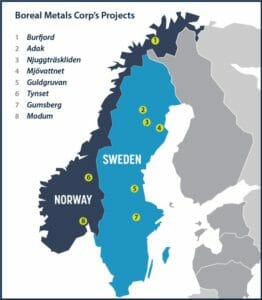 The target at Burjford is high-grade copper.

The Burfjord Copper-Gold Project is host to numerous high-grade veins with associated copper-rich envelopes developed across a large, 4 by 6 kilometre area and represents an attractive exploration drilling target with bulk tonnage mining potential. 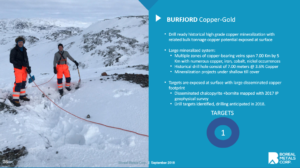 Since drilling began only two weeks ago, assay results are likely several weeks off.

Boreal Metals (BMX.V): honing in on multiple prospective zones at Gumsberg in Sweden

Canada Cobalt Works (CCW.V) is a battery metals dynamo. It operates in a region which produced in excess of five-hundred million ounces of silver and over thirty million pounds of cobalt in its day.

The company’s fully permitted underground access at Castle allows it to tap into thousands of meters of high-grade cobalt vein structures.

CCW has been drilling underground since early June. In late August, the company reported it had intersected visual cobalt mineralization in most of the 40 drill holes it had completed to date. At the same time, they initiated a surface drilling campaign to test several high priority targets 1.5 kms east of the Castle mine workings.

On deck is a mountain of assay data. The market is chomping at the bit awaiting the release of these results.

News could drop any day. Great drama could follow.

Zinc One (Z.V) is exploring/developing the past producing Bongará Mine Project in north-central Peru.

With its multiple near-surface mineralized zones, this is one of the highest grade zinc deposits on the planet. 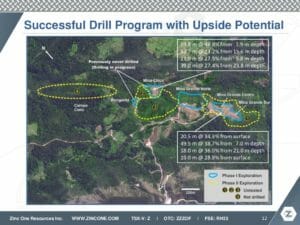 Highlights from recent assay releases include:

Note the grade. Note the depth.

Greater appreciation of Zinc One might be found in the following Guru commentary:

Zinc One (Z.V): additional high-grade zinc out of north-central Peru

Other companies that are due to deliver potentially market-moving assay results include:

The above list of assay-bearing companies is by no means complete. It’s just some of the companies we follow closely here at Equity Guru.