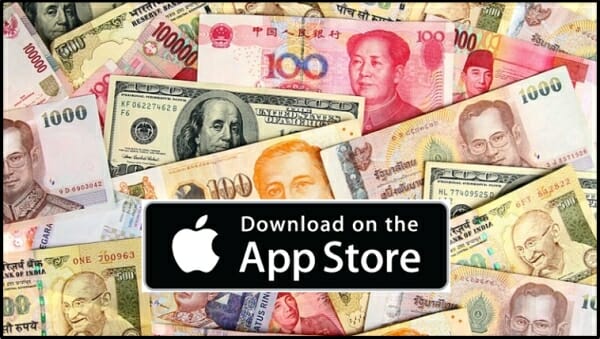 CUV Ventures (CUV.V) deploys “advanced technologies in the online travel, vacation, mobile apps, money remittance, invoice factoring, blockchain systems, and cryptotoken sectors,” which is a mouthful but comes down to this:

CUV wants to develop a banking network for the world’s under-banked masses that will allow them to do business with the first world, allow the first world to buy things from them, and travel to them, and remit money home to grandma, and basically knock Western Union out of a game worth many billions of dollars.

CUV’s flagship technology is RevoluPAY, the Apple and Android payment app, powered by blockchain and aimed at the worldwide $595 billion family remittance market.

Here’s the skinny: hundreds of billions of dollars are flying around the world, as matriarchs fund their children’s education, and immigrant children give financial support to their parents, or western nations try to do business with countries that are still emerging internationally.

Despite a spiderweb of multinational banks, the costs of these transactions are criminally high.

The Global Knowledge Partnership on Migration and Development (KNOMAD) has ground the numbers. It ain’t pretty.

Sending money 300 kilometers from Costa Rica to Nicaragua will ding you 3%.  Sending money from the U.S. to Cuba will cost an astonishing 11% per transaction.

We’re not talking about shipping bars of zinc to Cienfuegos.

The same hard costs as sending an e.mail. 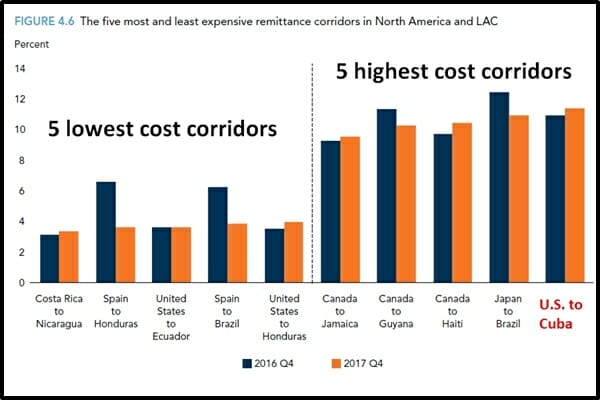 Western Union owns a good chunk of the money-moving business around the world.

“Western Union (WU:NYSE) is to the financial world what Blockbuster was to video rentals,” wrote Equity Guru’s Chris Parry on April 6, 2018, “You may have to pay their ridiculous fees while there’s no other way of doing business, but one day there’s going to be an alternative and you’re going to dance on their flaming corpse as they melt down.”

Sucking so hard that you get a 1-star review – isn’t easy.  And it’s not fun to receive one.  Some businesses hit back – as this woman discovered when she gave a 1-star Yelp review to her NYC gynecologist.

“Steer clear of this absolutely awful business,” warned one Western Union customer, “I just sent money to my sister for my ailing, elder mother overseas. They refused to pay my sister because I didn’t include her MIDDLE name!”

[EDITOR BREAK IN] Hey guys, Chris Parry here. Sorry to bust into Lukas’ story, but I just went through a week that was insane and ridiculous, and brought to a high level exactly why Steve Marshall’s RevoluPay financial network needs to exist:

I have a contractor who handles IT work for me. He lives in Thailand. Every month, to pay him, I send a wire transfer from my credit union, which means I have to stand in my credit union branch, line up, and help some staffer go through the process of what a wire transfer is, while he or she gets a senior staffer to walk them through it. It takes half an hour, at the minimum, and takes about 5 days to hit its final target.

For some reason, this stopped working last month, so I went to Western Union to send him money quickly. The insane fees were the least insane part of a process that took four hours, with the bulk of that time spent with me standing in a Western Union-linked Safeway supermarket, being asked questions on the phone by someone who appeared to not understand what a website was, and would not accept that my employee was an actual employee and not a prostitute, or mail order wife, or Nigerian scammer. It took four hours to get that payment through.

This month, I tried WorldRemit, which took the money I was sending off my credit card, but once it had that money, insisted that I needed to send copies of my passport, tax information, a copy of my utility bill, and more, and would send that to the CRA because I was sending more than a thousand dollars.

So I canceled that payment, waited three days to get my money back, and tried to send less than a thousand dollars, whereupon their internal team decided I needed to answer more personal questions and send that same wad of personal info to them, just in case.

Ultimately they rejected the payment because, and I quote, “You’re sending money for business purposes.. we don’t do that.”

I tried crypto, but setting up an account was going to take days and finding an exchange that actually sends cryptocurrency, rather than just buying and selling it, wasn’t easy.

I could courier the guy a cheque, but he’d have to wait up to 45 days for a foreign cheque to clear, according to his bank.

Paypal? Terrible fees, and even worse when you’re trading one currency for another.

Ladies and gentlemen, this is the world that is ‘sending money’ in our new technological age where we can get a couch delivered from another country in faster time than we can get $100 sent to someone in another country. It’s broken. It’s stupid. And it needs to be disrupted.

On October 01, 2018 CUV announced that it has received publisher approval from Apple to integrate the RevoluPAY app to App Store.

RevoluPAY S.L. has hired Hogan Lovells to prepare the legal opinion, compliance and, formal petition of the company’s proprietary EP banking license.  That license is expected to be granted early in 2019.

Until the proprietary license is awarded, the RevoluPAY app will operate with its current EDE Banking licensed partner.

CUV released version 1.0.8 of the proprietary RevoluPAY app, incorporating a cash-out (disbursement) facility to any bank located in the European Union.

Since July 31, 2018 RevoluPAY users have been able to load money to the e-wallet and transfer these funds nationally or internationally to other users with a RevoluPAY e-wallet.

Now, any user can instantaneously transfer their e-wallet funds to any bank within the EU. The technology is now going live.

RevoluPAY Version 1.0.8 is the iteration that has been submitted to Apple, thus, the same functionality will be available on both Android and iOS.

If CUV’s money-moving software gains global traction, the stock price will go higher in a hurry.

Apple’s final approval process takes on average, between 1 and 7 days.

Full Disclosure:  CUV is an Equity Guru marketing client, and we own stock.