Friday Fumble: Looking for dollars under the couch

We’re back with the fumble. Last week I was indisposed, apologies. A sexy nurse was slicing open my right arm and stuffing a camera through the artery all the way to my heart.

I have one! My ex-wife would disagree.

It’s a procedure called a coronary angiogram. If you’ve got a spare two thousand dollars lying around and nothing to do on a Friday afternoon I highly recommend it.

When you’re laying on the table you won’t be thinking about your portfolio. I guarantee you!

If you’re anything like me, you’ve got more pressing concerns like the fact they were running Windows XP to control a lot of their gear.

What? That shit could crash any minute and take me with it.

Anyway – All’s well that end’s well. Like my old man used to say to me: “If I’d known I was going to live this long I would have treated myself better.”

Speaking of near heart attacks, did you catch the madness which played out on Tilray (TLRY.NASDAQ) last week?

A few market themes to keep an eye on

Everything Equity Guru’s Chris Parry writes is top shelf. Occasionally though, a piece comes out which warrants closer attention.

Such was the case with his recent missive on e-sports

e-what? Yeah, I hear you. I played some Sega Mega Drive back in the day, lounging around with my then girlfriend taking bong hits while listening to Cypress Hill. They were happy, if somewhat unproductive, days. 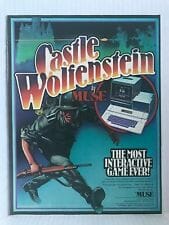 When my workmates would stay back on a Friday evening after work to play Doom or Castle Wolfenstein, I’d gladly skip off to the pub.

Gaming never got under my skin. At least, not in a big way.

But here’s the thing – there’s a ton of people out there who love it and even a bunch of folks making insane amounts of money off it.

As an investor, it’s something you need to try and get your head around now. The investment opportunities will appear before long.

We gave you the heads-up that Royal Nickel Corp (RNX.T) was going on a run after they hit the ‘mother lode’ at Beta Hunt in WA.

When the shares resumed trading on Monday September 10, 2018, they promptly doubled from 9c to 18c. Since then they have 4-bagged and closed September 26th at $0.83. 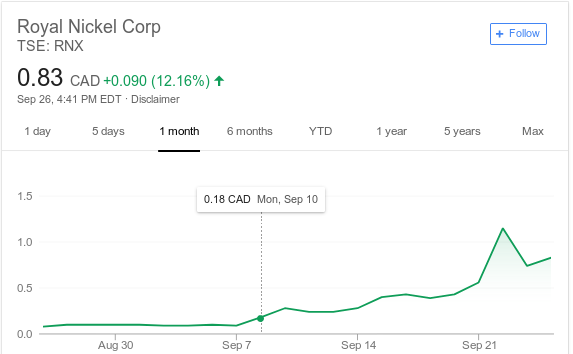 Well done to anyone who scooped up a few dollars trading this one.

Here’s the takeaway – Even if the POG (Price of Gold) ain’t marching forward, under the right circumstances investors are still pumping money into gold juniors.

This has been a great, straight-forward trade for anyone who had their eyes and ears open.

1. Elixinol Global (EXL.ASX)
It was always going to be a matter of when, not if, EXL punched into blue sky.

When it likely punches into blue-sky in the coming days there won’t be much selling pressure meaning buyers will have to pay up to get orders filled.

That old $1.99 high is dust. On Wednesday 26th the stock punched out to a new all-time high of $2.15. It had been flirting with the two buck level for the past week or so.

Today when we checked Google Finance there was no market data for EXL. Knew straight away what had happened without needing to check the ASX announcements.

Is EXL using that old play of raising capital on the back of a strong share price?

Yep, sure enough, that’s why the shares have been halted, most likely until the coming Monday.

This is a smart opportunistic play from the company, but as we show below, shareholders should expect some short-term pain.

The AFR Street Talk column has the goss on this one.

A $5.8 million raise at 53c a share, lead by Canaccord Genuity and Taylor Collison.

With the shares closing at 60c on September 25th the offering seems fairly priced.

Makes sense but cap raisings haven’t been a great deal for existing shareholders.

Let’s look at how this has played out with other pot plays:

Are trading books still a thing? When I was working in the Sydney CBD I’d spend many an hour at Dymocks flagship store on George St, packing into the scrum of blokes (never saw many sheila’s) who were huddled around the finance section.

Anyway, as someone who spent most of his weekly wage on books at one stage, here are my top five.

Don’t agree? Then jump into the comments section and say so!

“The three most harmful addictions are heroin, carbohydrates, and a monthly salary.”
― Nassim Nicholas Taleb

Everything by Taleb is good. Read’em all. One of my favourites right here.

For many of my generation this is the book which started it all. Should be on the bookshelf of every serious trader.

Have I lost my mind?

You need to tackle the physcological aspect of losing money. Sure Steenbargers stuff is good and so is Douglas (Trading in the Zone) but this is a hidden gem.

“Fighting the mind does not work. What works best is learning to focus it.”

I no longer have my copy (the advantages of a Kindle – when you own a tonne of books and move 3000km not all of them will make the journey with you!) but read it many times.

“I always laugh at people who say “I’ve never met a rich technician.” I love that! It’s such an arrogant, nonsensical response. I used fundamentals for 9 years and got rich as a technician – Marty Schwartz

One of my favourite Wizards.

I’d better go – with the coffers running extremely low this week it’s time to play one of my favorite games. I walk around the condo and constantly ask myself: “If I was a 100-baht note, where would I be hiding?”

FULL DISCLOSURE: None of the companies mentioned here are Equity Guru clients. 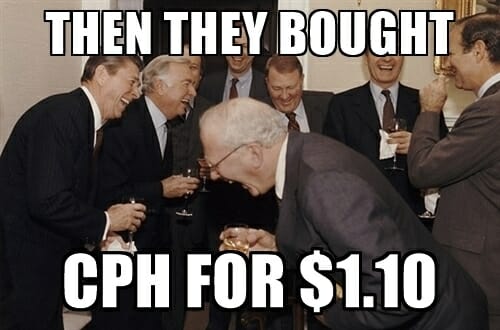 Friday Fumble: Equity Guru ahead of the curve, again.

ASX Friday Fumble: Hemp is hot, retail is not