Ascent (ASNT.C) is a brand-new weed company with market cap of about $220 million.

We first wrote about ASNT on August 8, 2018 – 24 hours before the stock starting trading.

“I invested in this group years before it came to the market,” wrote Equity Guru’s Chris Parry, “Because that’s how good they were. These were young, smart, driven, no bullshit guys who didn’t take the easy money early but instead insisted on laying the foundation for something epic.”

After walking through ASNT’s oils extraction and formulation facility Agrima Labs, Parry declared it “a monster”.

October is coming, and with it will come new rules, presumably allowing many more things that Ascent has either already developed, or will develop. They also plan to create IP for sale in the US and other parts of the world, where things like edibles may be more legal than here.

The next day, August 9, 2018 – the stock starting trading.  It’s been steadily gathering investor interest since then – but hasn’t experienced the vertiginous multiples of many other junior weed plays.

[Let’s stop for a moment.  Breathe in an out.  Acknowledge the fact that in this investor feeding frenzy – a 60% gain in 6 weeks is considered “modest”.] 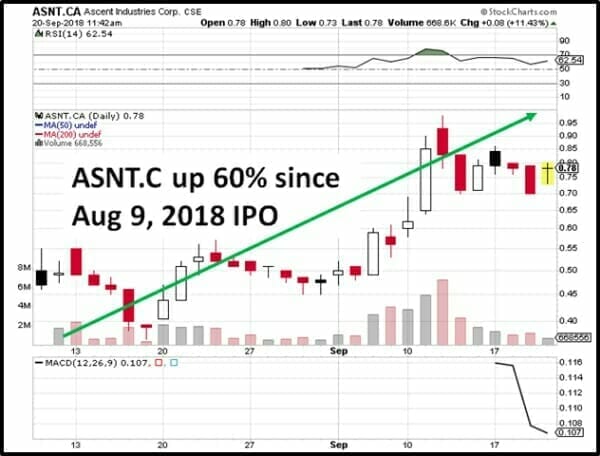 On Sept. 20, 2018 Ascent announced that its 100% owned subsidiary, Agrima Botanicals “has developed proprietary methodology for producing a variety of discrete, water-soluble cannabinoids, both in powder and liquid form.”

This is the geeky end of the weed business but it can be dramatically profitable.

Case in point: in 1856 a French microbiologist named Louis Pasteur discovered that heating wine stopped it going bad.  Pasteur figured out the optimum time and temperature to kill the malevolent microbes – while retaining the wine’s flavor and smell.

Ascent already has an international platform to launch the new tech into.

Agrima Labs – manufacturing facility, is expected to be ready to commence operations in Q4 2018.

Licensing – anticipated receivin a Sales Licence and second site LP licenses for Agrima Meadows and Agrima Labs over the next several months.

Hemp/CBD – Invested in Agtech Scientific, a Canadian corporation based in  Kentucky that develops hemp-derived, CBD-based medicinal formulas to be used in various  health and wellness applications. Agtech is partnered with major universities to produce clinical research supporting the benefits of CBD-based products.

Denmark – Agrima Botanicals has applied for a level 10 controlled drug license in Denmark, and made applications under the medical cannabis pilot program with the Danish Medicine Agency, including applications for the approval of eight cannabis derivative products that are currently in formal review. Buried in the September 20, 2018 press release is another important subplot.

“Water-soluble cannabinoids have a faster activation time of approximately 10-15 minutes in the human body, compared to 30-45 minutes generally for oil-based delivery methods. These effects generally wear off within two hours compared to 4-6 hours with traditional oil-based products.”

Did you catch that?

What that means is you can eat a water-soluble Agrima Labs product over lunch – head back to work and not be a blithering idiot.

The lunch-time weed chill–out could gain cultural acceptance in the same way you see executives in Paris downing a bottle of red wine at noon any monday-friday.

Ascent anticipates that it can “provide large quantities of water-soluble formulate to beverage and edibles manufacturers as an input ingredient.”  The discrete cannabinoids will include THC, CBD, CBN and CBG distillates.

“Ascent continues to be at the forefront of cannabis extraction and formulation technology,” stated Philip Campbell, CEO of Ascent, “We are well positioned to be a leader in providing our water soluble and other bulk formulates to product manufacturers around the world.”

Ascent is now adding the water-soluble IP to its patent portfolio.

Full Disclosure: Ascent is an Equity Guru marketing client, and we own stock.

4 thoughts on “Did Ascent (ASNT.C) just unlock a money vault?”