Boreal Metals (BMX.V): homing in on multiple prospective zones at Gumsberg in Sweden

There’s been some rather large talk around some of the more active online forums regarding junior mining stocks in recent weeks. It’s created a dark pall over much of the sector. Most of it hangs over the Golden Triangle based companies where delays in the release of assays results can only mean one thing: Bad News.

There’s an old adage that goes something like, ‘good news travels by wire, bad news travels by mule’… or something along those lines – there must be a million variations on the same theme. The underlying notion, particularly where junior miners’ are concerned, is that good news is rushed to the market, bad news is held back.

When a company CEO says,”we should have assays back from the lab in one week, two weeks tops” and four weeks blow by with nary a peep… the market automatically assumes the worst. It gets all loopy and breaks for an exit…

Generally speaking, this negative perception is warranted. Occasionally, however, there are legitimate reasons for the delays. Unexpected snags can develop which are well beyond the company’s control.

One such snag is a backup at the assay labs. If the lab can only process so much drill core per day and they’re suddenly inundated with 2 or 3 x their normal volume, delays can be expected. If said labs suddenly receive a deluge of drill core, the delays can be substantial

Up to twenty-six drill rigs were spotted by a group touring the Golden Triangle by helicopter roughly five weeks ago. A rig count that high is bound to create congestion. The labs in Terrace and Vancouver are currently dealing with the backlog.

Meanwhile, market participants are growing twitchier by the minute. These online forums have become release valves for bottled up rage. Some of the comments I’ve been reading lately are downright hateful, libelous, particularly those directed at company management.

I suppose it’s all par for the course, this collective neurosis and discord. It’s just the nature of the beast. Highly speculative auction arenas such as these are fertile ground for dramatic swings in emotion and sentiment.

But what some consider a crisis, others view as an opportunity…

Boreal Metals (BMX.V) may be one such opportunity. The company currently has 58.9 million shares outstanding giving it a Cdn $7,068,000 market-cap. With no less than eight irons in the proverbial fire, this company could see a dramatic valuation shift should one of its exploration campaigns hit paydirt.

Below, a very decent visual showing where these eight irons currently rank along the exploration/development curve… 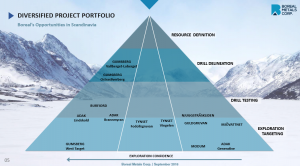 This week, Boreal shifts the focus from Norway to Sweden where the company is actively exploring its Gumsberg Project.

Gumsberg, a classic brownfield project, was host to thirty historic mines in its day. Most notable was the Östrasilverberg mine. Ostrasilverberg was THE largest silver mine in Europe between 1300 and 1590.

Obviously, this historic mining occurred at a time when only surface and near-surface mineralization was exploitable. Picks and shovels were considered high-tech back then. Chances are these ancient miners left some valuable rock behind.

The Gumsberg project is located in the world-class Bergslagen mining district between the past producing Falun / Saxberget mines, the active Garpenberg Mine run by Boliden, and the equally active Zincgruvan Mine run by Lundin – see map below… 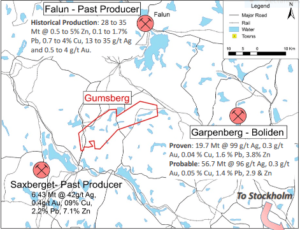 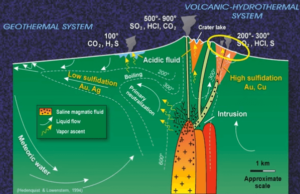 Often dominated by base metals such as zinc, lead and copper, VMS deposits tend to pop up in clusters. From an exploration standpoint, the geological setting can be very productive – where there is one VMS deposit, there are often others to be discovered.

As noted above, the Gumsberg camp was host to thirty historic mines back in the day. And in a VMS setting encompassing some 18,300 hectares, the exploration potential here might be considered wide open.

According to the exploration pyramid above, Gumsberg is in the drill delineation stage. Next stop is resource definition.

The company just completed a 61-line kilometer ground magnetic geophysical survey at Gumsberg.
For the uninitiated, a magnetic survey is performed to identify localized changes in the Earth’s magnetic field. These surveys measure the rocks magnetism, or lack thereof – both types of responses have predictive value as some metals are highly magnetic (nickel, iron, cobalt), some are not (gold and silver). Curiously, large zones registering a non-magnetic response may be indicative of a subsurface gold deposit. 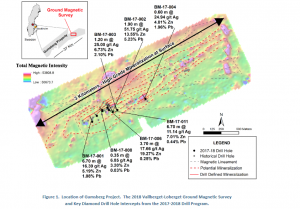 The results of the ground magnetic survey at Gumsberg greatly increase the base and precious metal prospectivity of our high-grade Gumsberg Project. The geophysical indications for multiple high-grade ore horizons vastly increases the potential for Boreal to build tons in the prolific Bergslagen Mining District where Boliden and Lundin are actively mining large precious metal enriched base metal deposits.

This is good science…

Having already generated multiple prospective zones for follow-up exploration, this methodical, systematic approach is going to effectively help Boreal hone in on Gumsberg’s sweet spots. Building tonnage is the name of the game here.

The company aggressively continues to advance their portfolio of prospective projects in Norway and Sweden. I believe it’s only a matter of time before they hit on something that’ll really cause the market stand up and take notice.

WE stand to watch.

Full disclosure: Boreal Metals is an Equity Guru client. We own the stock.