Extraordinary Future investor conference: Get your ass off the couch, Sparky 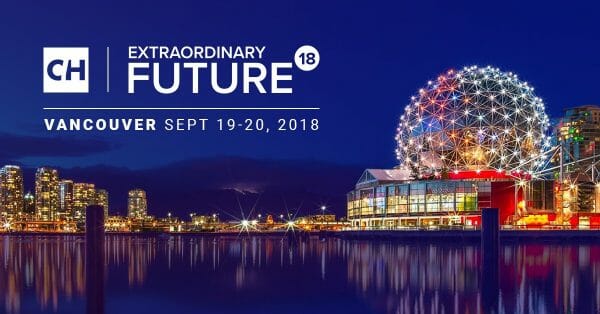 “This company sucks, they never talk to investors.”

“Insiders know about early financings and we’re always left out.”

“Does anybody know about this company? All I can find is the investor deck..”

Well, obviously nobody talks to you about their deals, their financings, their news, because you’re sitting at home reading this, in between Fortnite sessions, religiously watching your FSD Pharma stock that you bought because everyone else is buying it, wondering why the ‘grilled cheese’ flavoured chips taste like the ‘sour cream and bacon’ chips, and pondering whether pants would be a good call today or if you could freeball it til noon.

Occasionally, one needs to get outside and meet people. Expand your network. Talk to the guys running the companies you’re reading about in Facebook investor groups. Actually participate beyond retweets.

If only there was a single event, right there in downtown Vancouver, where you could wander around for a few hours with other investor types, chatting to CEOs an IR guys, taking in panels with thought leaders and industry leaders, asking tough questions of journalists and analysts.

What’s that? I’m being told there is.

Cambridge House puts on some of the best investor shows in North America, and the upcoming Extraordinary Future conference on September 19 and 20 in Vancouver will be no exception.

NOTE: WHEN YOU REGISTER, USE THE PROMO CODE ‘GURU’ FOR A 50% DISCOUNT

Crypto, gaming, virtual reality, biotech, cannabis, music, high performance computing, artificial intelligence, security, consumer products, battery tech – basically anything interesting on the markets over the last few years will be showing up at this conference, which the Cambridge House crew invested in a few years ago in the expectation that you guys would like a show that focuses less on rocks in the ground and more on rockstars in the making.

There will be over 70 companies on display at this year’s show, with representatives on the floor and on stage, talking to you about what they have coming.

The special guest to this year’s EF show is Chris Wylie, the guy who revealed the existence of Cambridge Analytica and its dastardly data-mining election-swaying that helped put Donald Trump in office. Whistleblower chats are always engaging, and Wylie is a hot ticket.

If he’s not enough, you’ll also get to hear from an A-list roster of thought leaders and executives on a variety of panels and keynotes, and you’ll get to see me eviscerate – I mean interview – six CEOS on stage as part of my ‘gauntlet’ event, including reps from Ascent Industries (ASNT.C), DMG Blockchain (DMGI.V), Bee Vectoring (BEE.V), Patriot One (PAT.V), SmartShare Solutions (SVP.H), and Province Brands (private).

That one at the end there, Province Brands, is a company I recently called ‘a ridiculous clown car full of bullshit claims‘ but, to his credit, the CEO is happy to sit face to face with me and tell me where I was wrong. It promises to be a fun time.

Also worth seeing will be the CSE hosted ‘Blockchain and the capital markets, what’s next’ panel, including NorthStar Ventures boss Dean Sutton, who hates hates hates the blockchain scene that his company is smack dab in the middle of and isn’t afraid to tell anyone who’ll listen where everyone has got it wrong (added bonus: he’s right).

I’ll be moderating a panel on e-sports and gaming with reps from YDreams (YD.V), Ampd Gaming Tech (public soon), and Axion Games, right after a half hour with weedcos Emerald Health (EMH.V), Quadron Cannatech (QCC.V), and Green Organic Dutchman (TGOD.T), and the early part of the first day will be a cavalcade of blockchain and crypto folks telling you how they’re not dead yet.

And Equity.Guru will be debuting its new virtual reality program for investor presentations with a sneak preview of what it’s like to stand inside Ascent’s BC grow facility.

See you there, pumpkin.