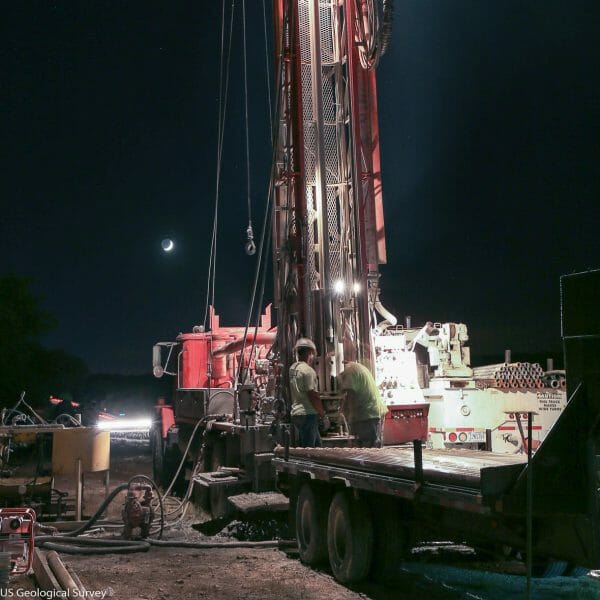 ‘Ground Floor Opportunity’. The phrase, according to Merriam-Webster, means:

As investors, we’re always on the lookout for companies that might represent ground floor buying opportunities. Not an easy task. This is especially true in the resource exploration arena. But every once in a while such an opportunity reveals itself.

Oracle Energy Corp (OEC.V) is not a new company. The company’s business plan has changed, however. The company has retooled, shifted its focus from an international lean, from sub-Sahara Africa, to the Eagle Ford district of South Texas, specifically the Eagle Ford Shale Formation.

I’m certain you were able to divine by its name that Oracle Energy is an oil and gas play. I’d add that it’s a unique oil and gas play, one with extraordinary potential.

Some background on the Eagle Ford Formation…

As mentioned above, the company’s primary focus is on the Eagle Ford Formation of South Texas. The above map gives you an idea of its location, but for those unfamiliar with the resource potential of this prolific oil-producing formation, the USGS (United States Geological Survey) recently released an updated estimate of some 8.5 billion barrels of oil, 66 trillion cubic feet (TCF) of natural gas, and 1.9 billion barrels of natural gas liquids in “undiscovered” and “technically recoverable” resources. Note that these government reports often understate their resource numbers.

These ‘undiscovered‘ and ‘technically recoverable‘ resource figures represent the volume of oil and gas that are in place and can be extracted using current technology.

Texas continues to remain in the forefront of our Nation’s energy supply chain with remarkable increases in production and reserves due to the revolutionary unconventional techniques used to release previously unrecoverable resources.

“… remarkable increases in production and reserves due to the revolutionary unconventional techniques used to release previously unrecoverable resources“… this is where Oracle management comes in. The company’s technical skill sets are stacked high. More on this management team later.

A few interesting facts regarding the Eagle Ford Formation:

Oil and gas are well-distributed throughout the Eagle Ford formation – more so than other shale area plays.

This assessment is a bit different than previous ones, because it ranks in the top five of assessments we’ve done of continuous resources for both oil and gas. Usually, formations produce primarily oil or gas, but the Eagle Ford is rich in both.

The evolution – a play by play of Oracle’s ‘Eagle Ford Only’ focused business strategy:

It was through these contacts that the company came into the acquisition of its formidable land package in the Eagle Ford district.

Expanding the above list with its most recent entry, on August 31st, the company dropped the following piece of news..

Details regarding the two Eagle Ford assets highlighted in this release:

The productive formations which encompass both project areas include the Buda (the deepest), the Eagle Ford (upper and lower), and the Austin Chalk (the shallowest).

The second asset is the subject of an Option Agreement, dated May 19, 2018, with four arm’s length private entities doing business in Texas ( collectively the “Optionors”) which own acreage adjoining the HBP Assets (the Adjoining Lands). This Option Agreement will result in a total (including the HBP acreage) of 6310 net acres of which 4923 acres are for all depths, 613 acres are to the base of the Buda, 640 acres are to the base of the Eagle Ford and 134 acres to the base of the Austin Chalk. In accordance with this agreement Oracle has paid the option payment of US$500,000 and is required to sign an Oil and Gas Lease and a Surface Lease and to pay the balance for the leases by September 28, 2018. This full consideration will earn; a working interest of 100%, a 3 year right to drill, an option to extend the lease for another 2 years and the subsequent right to retain the productive acreage by payment of a 25% royalty on production. The lease includes a requirement to drill 2 wells in the first year of the lease.

The August 31st news also highlighted a NI 51-101 report prepared by RPS Energy Limited (RPS), an independent qualified evaluator, to assess the oil and gas recovery potential from the Lower Eagle Ford in the proposed acreage. Based on the results of this evaluation, Oracle expects commercially recoverable volumes of 31 million barrels of oil and 59 billion cubic feet of gas from the Lower Eagle Ford in the lease area.

The company went on to state…

These volumes are currently classified as 2C Contingent Resources in the Development Pending subclass. The 2C classification indicates there is a 50% probability the recovered volumes will exceed these estimates and a 50% probability that the recovered volumes will be less than these estimates. The un-risked, after tax, net present value, discounted at 10%, for these assets is $329 MM US. The project development, based on a conceptual development plan, would begin with drilling commencing in early 2019 and completing in early 2023. First production would occur the first half of 2019. The development plan calls for 50 horizontal, long lateral, wells and a development cost of $358 MM US. There is uncertainty that it will be commercially viable to produce any portion of the resources.

The last point covered in this recent piece of news concerned project funding.

It’s forecast that the company will require US$18.7M for the first six months – $10.3M for land acquisition (inc A&G), the remaining $8.4 million for drilling off its first long horizontal well in the Eagle Ford.

The company will use equity financing to fund the acquisition of the acreage. The development capital will be funded either by a drillco or a joint venture partnership. Management is currently in discussions with several Canadian institutions on the equity-raise front. Its financial advisor, Petrie Partners Securities, is already actively working to secure the development capital in the US.

This is an impressive team. It’s a team which boasts an average experience level of over 35 years. Their skill sets range from geoscience to reservoir engineering – from facilities engineering to drilling and completions, to operation best practices.

Having overseen a broad range of operations on projects which included the Pearsall Formations in Texas, the Bakken, and Red River Formations in the Williston Basin, this crew is the real deal. It’s a team that places enormous belief and value on technology, particularly from a drilling-completion frack-design standpoint. They have access to the latest and greatest technology, and the expertise to run with it.

Darrell McKenna is Oracle’s Chief Executive Officer and Chairman of the Board of Directors. CEO McKenna has over 38 years of experience in the oil and gas industry working in various engineering and leadership roles. His resume, along with those of Art Green (Senior Advisor), and Nasim Tyab (Founder and Capital Markets Strategist) are best perused here.

During a recent conference call with CEO McKenna, Equity Guru learned that Oracle is expecting to spud its first horizontal well by year end. This well will go a long way toward proving up the company’s technological prowess.

The company’s primary target with this drilling will be the Lower Eagle Ford Formation, with upside in the Upper Eagle Ford and Austin Chalk horizons.

This first drilling plan, which may include a pair of wells drilled from a single pad, will have a lateral extent of 1.5 miles.

The anticipated time frame for drilling this first well is 16 days.

The drilling of this first well should mark the kickoff of 3 years of continuous drilling by the company. Go big or go home – this is an aggressive management team.

This 3-year drilling plan will incorporate multiple rigs. Cutting-edge technology will be the project’s hallmark.

The company’s ambitious plans include the drilling of extra long laterals – up to 3 miles long. This is one kick-ass horizontal well plan.

Regarding the 7 producing and 6 shut in wells noted in the press release above, the company has plans which include re-fracking, lateral extension and recompletion into other horizons.

The company is, for reasons strategic, reluctant to flag its exact location on the Eagle Ford Formation. It safe to say, however, the location is highly prospective as the company is looking to tie up addition land in the area.

Once again… the latest and greatest technological approach will be applied to this formidable land package. Though the company can’t openly speculate on anticipated production levels, I get a sense that the potential here, on a per well basis, is significant.

There are roughly 55 million shares outstanding giving Oracle, based on its most recent close, a very modest market-cap of $8.25M.

Inside ownership currently sits at approximately 25%. That’s what I would call ‘skin in the game’. Management’s interests are aligned along with its shareholders.

This is a rapidly evolving Eagle Ford story. I would expect substantial newsflow in the weeks and months to come.

The company continues to add talent to its roster. Reese R Mitchell will assume the position of Sr. Vice President Operations and will be responsible for engineering, drilling and operations.

Mr. Mitchell has 37 years of operational, technical, and management experience in the U.S. and International onshore and offshore. Has held senior leadership roles overseeing unconventional drilling, completion, production & associated disciplines. From 2012 through 2017 he served as the Senior VP of Operations for Vitruvian II, a large private equity backed SCOOP mid-con operator. In this position he managed all aspects of drilling and completion activities including running 4 rigs for a three-year period, drilling 48 horizontal wells and growing production to over 30,000 boe/d. Mr. Mitchell earned a Bachelor of Science degree in Natural Gas Engineering from Texas A&I University.

FULL DISCLOSURE: Oracle is an Equity Guru client. The author does not currently own the stock, but may initiate purchases in the near future.

Feature image courtesy of the USGS