Tilray (TLRY.Q) plummets $9.76 after insano run, because shorters are animals

When a new listing goes on a $25 to $95 run in the space of nearly three weeks, the forces of gravity building up over the top of it are always going to collect to breaking point.

Observe Tilray (TLRY.Q), which IPOed on the Nasdaq at US$17 per share, and then went on the rip of all rips. 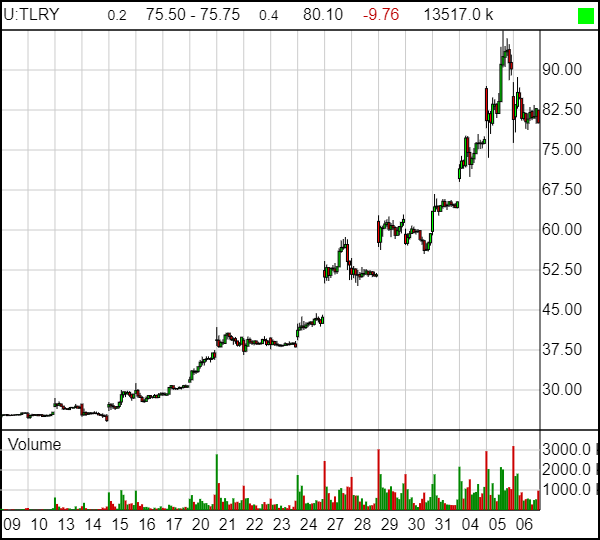 But while the run has been a nice one for those that got in early, the last 24 hours has seen a defined turnaround in sentiment. It appears that there is a limit when it comes to cannabis fever, and 5x return on your money inside a month is pretty much it.

Ideally, if a stock has strong support, you’ll see the buying come through the day. Ditto selling.

But Tilray’s trading activity, while definitely high volume through the trading hours, goes bonkers at the beginning and end of each new day. It’s either way up, or way down, before things even get started.

More recently, the downs have won the day. 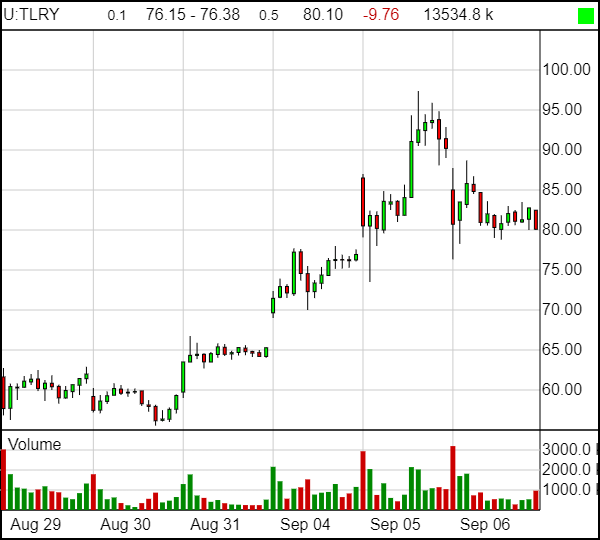 This is not smart trading, for the average guy. It suggests everyone is chasing rather than buying on credibility and prospect.

Daytraders may have the balls to gamble in this red or black scenario, but it’s less investing than gambling and, frankly, even the big players that helped move the stock up are abandoning ship.

Citron LOVED $TLRY at $26 but now we are SHORTING stock. Cowen lowered est and still raised tgt $62 only shows “RETAIL INVESTORS GONE MAD” and forgot $TLRY went public at $17 – 6 weeks ago. We would expect an equity raise at these levels. By far most expensive in space.

In response to the many questions. $TLRY 3x more expensive than leader Canopy despite no bev deal, behind in funding, and lower capacity. Here is the chart you requested pic.twitter.com/54uLaTQWvY

So the promoters that got Tilray up are pulling the plug and taking their wins, which would explain the big chunky sell-offs. But who is buying that stock off them, even at these levels, when it indeed went public at $17 just six weeks back?

Come on, you mouth-breathing human thumbs, get smarter with the market.

Why, this is the same Citron research that fed the market a short report on Cronos last week, claiming it was hiding data from the market (it wasn’t), and shredded its share price, earning Citron’s short position a nice fat return.

$CRON tgt price $3.5. Everything that is contaminated about the Cannabis space. ALL HYPE with possible securities fraud. For full report go to https://t.co/rPKOW3IOdE

The reaction by people with knowledge was quick and concise: They called bullshit.

Citron says investors should be especially wary of Cronos because it isn’t disclosing the size of its agreements with the various Canadian provinces, unlike other major firms in the space. Several Canadian provinces have announced their supplier lists ahead of adult recreational legalization in that country taking effect Oct. 17.

In a note to clients late Thursday, GMP Securities analyst Martin Landry said that Canadian provinces haven’t made fixed commitments to buy pot, rather that it was buying from a list of suppliers and would replenish said weed as needed — whichever products that sell the best. The provincial government-backed pot operations have “limited visibility” into what brands people will actually buy and so Cronos is being “prudent,” said Landry.

When asked whether Citron owns positions in Tilray or Canopy, Citron said it was shorting Cronos.

Left hasn’t always been well received for his work:

A Hong Kong tribunal banned US short-seller Andrew Left from trading on the city’s market for five years after publishing “false and/or misleading” claims about a company listed there.

Left must repay HK$1.6 million in trading profits, pay about HK$4 million in legal expenses, and will face criminal prosecution if he breaks Hong Kong rules again, the Market Misconduct Tribunal said Wednesday. The penalties follow the tribunal’s August ruling that Left’s Citron Research published a 2012 report that was “false and/or misleading as to material facts or through omission of material facts.”

Short sellers are necessary in a market that could otherwise overinflate. But just as relentless market pumpers are bad for you, so too are those who fuel their short positions with misinformation that financial journalists allow to go out to a large audience, unchecked.

The recent marijuana market surge has been quite the thing for people looking to make a quick profit on any old rope, but investors know that stupid quick climbs eventually run out of cliff to hold on to.

It’s a long way down. Tilray, it appears, is hanging on to that cliff by its fingertips.

FULL DISCLOSURE: No dog in this fight, but Cronos got unfairly worked for no good reason. If even the shorters are done with Tilray, don’t get caught.