In high school, a funny Czechoslovakian boy was simultaneously captain of the debate team and the soccer team.

A charismatic girl a year ahead of him was a top provincial physics student, while also modeling for a high-profile Italian underwear company.

Of course, they became a couple.

And so it is with The Green Organic Dutchman (TGOD.T) and Aurora Cannabis (ACB.T) – two over-achieving companies that leapt happily into bed.

As we documented in May 2018, shortly before TGOD went public, “TGOD has developed a strategic partnership with Aurora Cannabis.”

At that point, TGOD had raised approximately $160 million dollars and had over 4,000 shareholders. TGOD claimed that Aurora “not only supplies financial capital”, but is also a world-class provider of human capital, products, and has an international footprint. 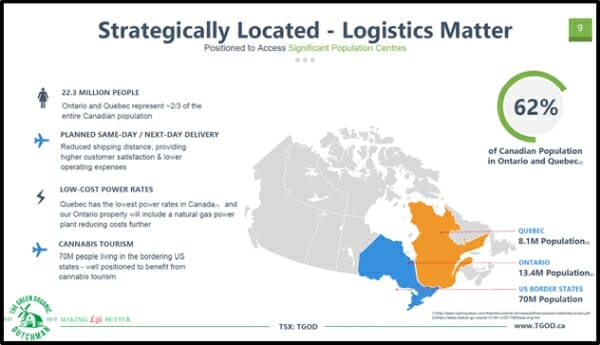 On September 04, 2018 TGOD announced an agreement to extend Aurora’s exercise deadline of its first milestone option by 6 weeks to October 12, 2018.

The first milestone option entitles Aurora to acquire an additional 8% of the common shares of the Company.

According to the January 5th, 2018 press release:

“Aurora has the right to purchase a number of common shares equal to 8% of the common shares on a fully-diluted basis 3 months after TGOD becomes listed on a stock exchange in Canada at a 10% discount to the listed market price.”

Under the original agreement, the first milestone option was triggered on August 2, 2018.

Both companies have agreed to extend the term, so that the milestone option will now expire on October 12, 2018.

“The Aurora partnership has been incredibly beneficial for both parties to date,” stated Brian Athaide, TGOD’s CEO. “In addition to the organic supply agreement, the value of Aurora’s initial investment has increased nearly five-fold. In turn, the assistance provided by the Aurora team has helped accelerate our progress across all divisions.”

Also, on September 4, 2018, Aurora announced that is has closed a debt facility with the Bank of Montreal consisting of a $150 million term loan and a $50 million revolving line of credit – both of which mature in 2021.

Included is an option to upsize the facility to $250 million total following the implementation of Bill C-45 on October 17, 2018, subject to agreement by BMO and satisfaction of certain legal and business conditions.

For more information on TGOD, you can read Equity Guru articles about its hemp investment, dividend, financings, product development, recruiting…etc.

“We are pleased with the progress made at TGOD to date, as reflected by the significant appreciation of our investment,” stated Terry Booth, CEO of Aurora, “We are now working with the TGOD team on finalizing the details of our go forward partnership.”

By mid morning, Aurora is up 1% on 8 million shares traded.

The relationship is getting deeper.