As Equity Guru’s Lucas Kane wrote earlier  in the week, Supreme Cannabis has secured six provincial supply agreements, including a 24-month deal with Ontario, and has seen its stock price increase 35 percent in the last two weeks. 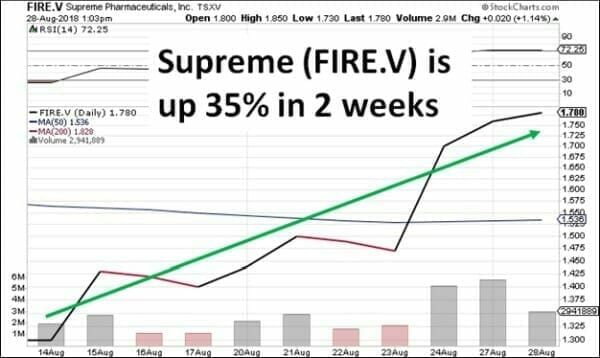 To frame this accomplishment, other cannabis companies to have secured five or more provincial supply deals include industry movers and shakers such as Canopy Growth (WEED.T), Aphria (APH.T), Aurora Cannabis (ACB.T), Tilray (TLRY.NASDAQ) and Organigram (OGI.V).

As I’ve said before, Supreme Cannabis does things a little differently. It utilizes a B2B sales model for their product: they don’t mind selling to other cannabis companies. They’re all about moving product and they’re doing a great job of that.

Mr. Supreme goes to the market

Looking through financial statements, what stands out is that Supreme Cannabis has done little to market itself when compared to competitors with similar market caps.

Additionally, Maricann Group, with a market cap of only $288 million, spent $387,000 on marketing in Q1, surpassing Supreme Cannabis in advertising despite having a smaller valuation.

But Supreme took a managerial turn earlier in the month, choosing to begin telling its story to the greater market, including engaging in a marketing program with Equity.Guru.

What are OTCQX listings?

The OTCQX listing is reserved for companies which meet stringent financial standards, disclose news in a timely fashion to shareholders and can find a third-party sponsor.

As part of the approval process, OTCQX Companies are required to submit an introductory letter from an approved OTCQX Sponsor. OTCQX Sponsors can also provide professional guidance to generate investor demand, build long term relationships, and assist the company in adhering to disclosure protocols.

The advantage of being listed on the OTCQX Marketplace is the legitimacy it provides a company. Shell companies, companies in bankruptcy or companies involved in questionable activities are all barred from entry.

Supreme Cannabis has been kicking down doors and signing supply deals for months. Now they’ve been added to a new exchange and are seeing a surge in share price to boot. Sounds legit to us.