Big news everyone! A company in Ontario is going to brew cannabis beer, and it’ll be amazing because they have the licenses to do it and will brew so many bottles, the cannabeer will be falling from the sky!

That’s what the CEO of Province Brands said on James West’s Midas Letter stream, anyway, before being shut down by people on Twitter who actually know what they’re doing.

“We’re looking to raise about $30m, concurrent with our public listing,” said Dooma Wendschuh on the Midas stream. He’s going to need it.

“Is that enough to build a brewery?” asked West.

“It’ll be enough to get us started,” responded the CEO, before claiming, at full capacity, that he’ll be producing “175,000 hectalitres, which is roughly 60 million bottles of cannabis beer.”

“We’ll be the largest cannabis brewery in the world,” he claimed.

This is the place where I usually say, “Yes, and by this time next year, Charlize Theron will be pregnant with my second kid.”

I recall, back in the early days of weedcos existing legally in Canada, when the CEO of CEN Biotech (FITX.OTC) was putting out news claiming it was getting its license ‘any day now’ and would build the world’s largest weed facility, and would produce a “billion grams of weed” by the same time next year.

I called bullshit but the claims were widely trumpeted as real.

Heady stuff, and enough to get them a fat story in the New York Post.

“The Ontario site will be able to grow 1.3 million pounds of pot from 50,000 plants — an operation that could produce $5 billion in sales per year when it starts producing in a few weeks after it passes government inspections,” said the Post story by reporter Tom Donnelly. “No more hiding grow lamps in closets: This $20 million facility will churn out pot like other factories churn out aspirin. And it has plans to expand to the US.”

“The facility is done, it’s ready,” CEO Bill Chaaban is reported as saying. “It’s laid out [like] a manufacturing facility for prescription drugs.”

At the time, FITX only had a lease on a polebarn and permission to build a fence around it. That’s all the company ever got, they never got municipal permissions, never got a license, never got any plants grown, but that was enough for the CEO to post pictures of other people’s weed grows to Facebook and blow paper out every single day for months, while telling investors on Facebook that they should be buying that paper or they would regret it.

I haven’t seen a ruse that blazingly obvious in the years since, but Province Brands has me feeling nostalgic.

“Because we have both of those things, we can do contract brewing for LPs and breweries.”

Deepak Anand works for Cannabis Compliance Inc., and has a long history of working in industry representative groups that promote the business and its evolution in a legal, reasonable manner. He’s helped start training curriculums and standards for producers and more.

Ok, I’m sick and tired of this:
1) No, @ProvinceBrands you don’t have a ‘marijuana’ licence.
2) European Medical #Cannabis markets don’t allow infused brevages.
3) You won’t be exporting medical #cannabis beverages from Canada “eveb before Oct 2019”.https://t.co/3J76hT5nLw

Province Brands, right now, has a beer can mockup and a logo. That’s it.

Sure, it has investment from Auxly (AUX.V), which is a shame because Chuckles Rifici is normally a better due diligence guy than this, and there’s obviously no shortage of market guys who’ll help raise more as it’s needed, because they make a 7% finders’ fee and share none of the carnage that’s likely to follow, but the don’t have a brewery, don’t have a license to run a brewery, and they absolutely 100% DON’T HAVE A MARIJUANA GROWERS OR SELLERS LICENSE.

It does have a partnership with a Canadian university and $300k of matching funds should it spend that much on the pointyheads, but it can’t ‘brew cannabis beer’ because it doesn’t have a license or a facility or a technique or IP or anything more than a few media interviews with people who aren’t looking too closely, that claim they’ve nailed it.

Anand’s public scolding did bring a response from Province Brands however, and an admission that they don’t have the licenses the CEO said he had. 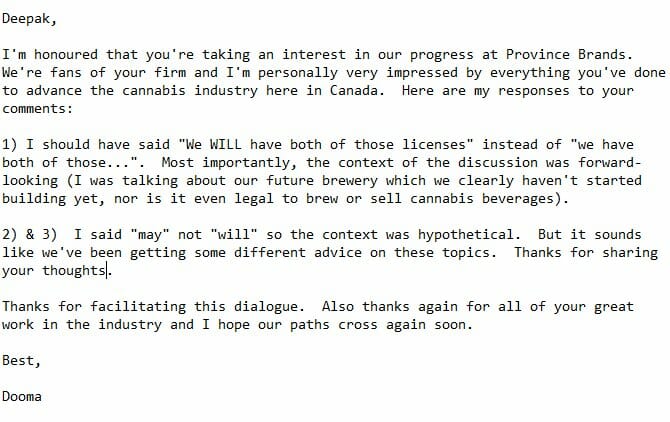 This is scammy rubbish. There’s nothing in this entire interview that adds a ‘we may’ to the claims of the world’s biggest everything that’s set to come. There’s no ‘if the law changes’, but ‘when’. There’s no ‘we hope to create a great beer’, it’s ‘we have.’

Bullshit. Wall to wall bullshit. Anyone putting money into this company should instead come with me to Hastings Park, where we can throw red wine on each other, bash our heads against a light pole, and throw all of our money onto “Not a Chance in the World” for a win in the 7th at odds of 500-1.

There are a lot of companies working on actual beverage tech and/or product development and/or deals with real life breweries and/or have beverage heavyweights on payroll. The list includes:

ALL of these companies are closer to a cannabis adult beverage than Province Brands. All of them. Every one. For a start, they’re legally allowed to touch cannabis, while Province Brands is not.

You’re going to see a lot more of Dooma Wendschuh on your screens over the coming months, no doubt, telling the world how he’s already cornered the market for beverages, but ask yourself this:

If that’s true, why did Molson Coors, Heineken, Constellation Brands (and soon, Diageo) do deals with companies that aren’t Province Brands, in some cases for billions of dollars?

Because they’re not idiots, that’s why.

Don’t be an idiot. Sneer and move along.