Choom (CHOO.C) has advanced aggressively into Canada, planting its flag in the rapidly growing legal cannabis industry with a fun, funky brand of handcrafted herb.

As legend has it, “Choom was inspired by a group of buddies in Honolulu during the 1970’s who loved to smoke weed—or as the locals called it, Choom.”  One of those locals was former U.S President Barrack Obama according to Adam Sorensen at TIME.

So far, the company has been hitting its milestones – and then some. 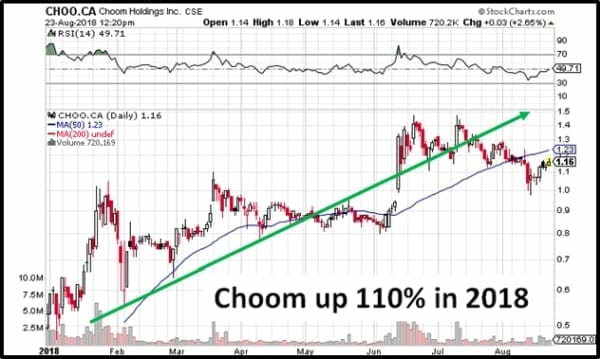 On August 23, 2018 Choom announced that it has significantly advanced its retail portfolio in Alberta and British Columbia.

Choom has secured the rights to an additional 5 retail locations in Alberta and 7 in B.C. These new retail opportunities bring Choom’s total retail potential up to 52 locations across western Canada.

In the press release Choom warns that the “retail opportunities are subject to all necessary governmental and municipal approvals being granted.”

Indeed, waiting for legal Canadian recreational weed is like being pregnant in a heat wave.

There’s the euphoria of the announcement, hot flashes, some vomiting, the belly bump, percussive kicks from within.

But every day you wake up and the damn thing isn’t born yet!

There’s still a lot of hand-wringing – and some confusion – about the impending new world of legal rec weed.

According to the Conference Board of Canada, “more than half of Canadian businesses are “concerned” or “very concerned” with the upcoming legalization of cannabis.

We walked into a local pot shop in Kitsilano last week and had the following conversation.

EG:  I want to buy CBD.
Dispensary:  With THC?
EG: I don’t have a prescription for THC.
Dispensary: If you join our club, you don’t need one.
EG: What’s does a membership cost?
Dispensary:  $8 – but we’ll waive the fee.

Choom’s retail opportunity map confirms that it is currently “negotiating additional leases with the intention of submitting applications for retail licenses.”

“In the burgeoning recreational sector, the consumer will be difficult to acquire,” predicted President and CEO of Choom, Chris Bogart.  “Choom’s brand was created exclusively for the adult use market.”

Additionally, Choom has received Development Permits in 11 municipalities and is in the process of its retail store buildouts. 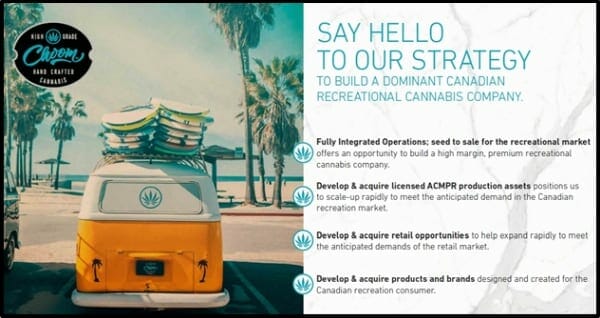 This summer, Choom bulked up its Board of Advisors with veterans in “Consumer Branding, Retail Supply Chain, Government Relations and Financial Services.”

John Heaney, the former Chief of Staff for the Government of Alberta, where he was a key official in developing the Alberta government’s energy royalty review and climate-change legislation.

On June 26, 2018 Choom announced the appointment of Kyp Rowe to be the new Director of Operations. Rowe will advance the retail roll-out for the recreational market in Canada.

A “seed to sale” veteran, Rowe helped bring Sante Veritas Therapeutics, to the final stages of licensing. For almost a decade, he was a Vineyard Manager in the Okanagan.  He also managed “a European breeding facility that produced cannabis seeds for worldwide distribution, as well as overseeing a large cannabis production farm.”

SMP, based in Sooke, BC, is committed to becoming a Licensed Producer of cannabis under the ACMPR.

The Municipality of Sooke has approved cannabis production zoning for the site. Final planning for this expansion is currently underway.

“We are excited to add SMP to the Choom group of companies under our Arbutus Brands subsidiary,” stated Bogart, “Arbutus Brands will add value to the entire Choom supply chain, from seed to sale.” 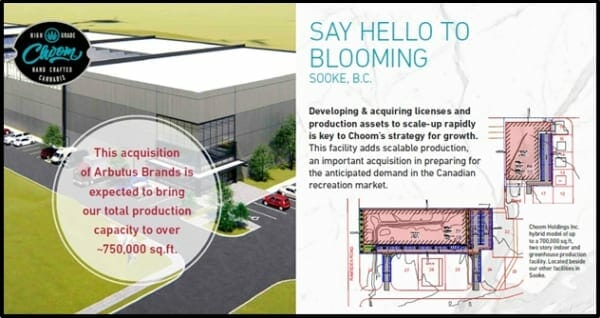 According to Equity Guru’s Chris Parry, “It doesn’t matter how much you can grow if the market gets sucked up by a sweet ass brand from a smaller player who can sell at high prices because everyone wants his version of ‘Heisenberg Blue’ over Canopy’s Lemon Skunk.”

The troops have arrived.

When the Canadian federal government finally gives a green light to recreational weed – the war will begin.

Full Disclosure: Choom is an Equity Guru marketing client, and we own stock.