MassRoots (MSRT.OTC) is discovered lying in a mysterious pool of red liquid

When we inquired how the website was going to make money, he admitted that he had “No f**king clue”.

Three weeks later, investors got spooked and the company keeled over dead.

MassRoots (MSRT.OTC) is the 2018 version of a “silk tie information portal.”

A “user-driven social media platform for marijuana consumers,” MassRoots wants to be “Yelp for pot users” – which sounds promising until you consider that pot users could just use Yelp. 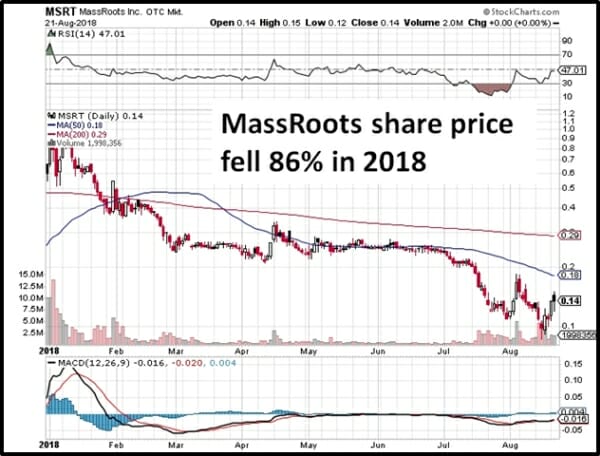 According to corporate literature:

MassRoots has one of the leading market-shares of users and businesses in certain key, regulated markets in the United States.

MassRoots also “has more than 1,000,000 registered users with wide followings across all social media outlets and significant internet traffic.”

MassRoots anticipates that most of its revenues will come from dispensary listing fees.

“We intend to charge dispensaries a minimum of $420 to $1,000 per location, per month, with a 12-month minimum contract to be listed on our dispensary map and have access to its comprehensive business portal.”

MassRoots assures investors that its “financial model is not tied to the success of a particular location, brand or a particular ballot initiative.”

But its financial model is, presumably, tied to notion that someone, somewhere, eventually, will want to cut a cheque made out to “MassRoots”.

Almost 50% of the 2017 loss was tied to stock-based compensation.

After reviewing the grim numbers MassRoots admitted that there is “substantial doubt about the company’s ability to continue as a going concern.”

The CEO of MassRoots is a 25-year-old American entrepreneur named Isaac Dietrich.

Prior to launching MassRoots, Dietrich served as campaign manager for G.O.P. congressman Scott Rigell – who won his district – but then heroically quit politics after refusing to endorse Donald Trump. 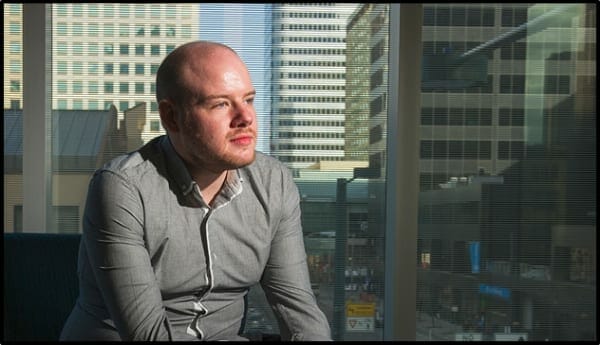 Although Dietrich has the countenance of a daydreaming barista [see above photo], he is in fact a savvy backroom brawler.

Late in 2017, the MassRoots board sued Dietrich for “illegal drug use at the work place,” and “improper sexual activities.”

In Dietrich’s defense, surely the main point of being a 25-year-old multi-millionaire is to get high and have perverted sex.

At any rate – Dietrich did not go quietly into the night.

A few weeks later, the MassRoots board of directors resigned and were replaced by Dietrich’s hand-picked team.

In a bizarre August 14, 2018 earnings call Dietrich squared-off against a caller who claimed (untruthfully) to be affiliated with the SEC.

John Wallace:  Looking at the reported financials we don’t see too much.

Dietrich:  We’re charging dispensaries anywhere from $420 to $1,000 per month.  As the historical revenues may not be the most significant, we do believe that they will be improving in coming quarters.

John Wallace: Do you have any paying clients now?

John Wallace:  How many?

Dietrich: We’re not releasing that at this time.

Using MassRoots own low-end estimate of $420 per month/dispensary – and 3-month revenues of $2,237 – the answer would appear to be “about two”. 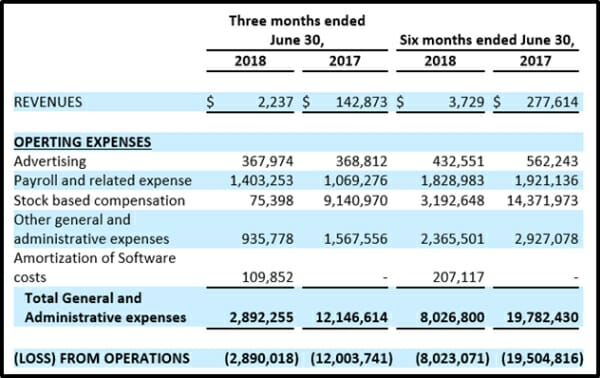 On a positive note, the operational losses are $11.5 million lower for the six months ending June 20, 2018 – then they were a year earlier.

“We are continuously evaluating opportunities to partner with best-in-class companies in the cannabis space,” stated Dietrich in a recent communication to shareholders, “We greatly appreciate your continued support as we work to create a valuable, long-term enterprise for our shareholders.”

Our writer friend, the CEO of the “silk tie information portal” – once nodded off in a board meeting.

When he jerked awake, he discovered – to his horror – that everyone in the room was staring at him expectantly.

Clearly, he had just been asked a question.

Our friend – who is mentally nibble – cleared his throat and declared, “Future revenue streams will solve all these problems!”

The Directors nodded sagely, and the meeting continued.

Full Disclosure:  We have no commercial arrangement with MassRoots, nor would we ever consider owning a silk tie.