Capital at work at TGOD: Raises being used for ramp up 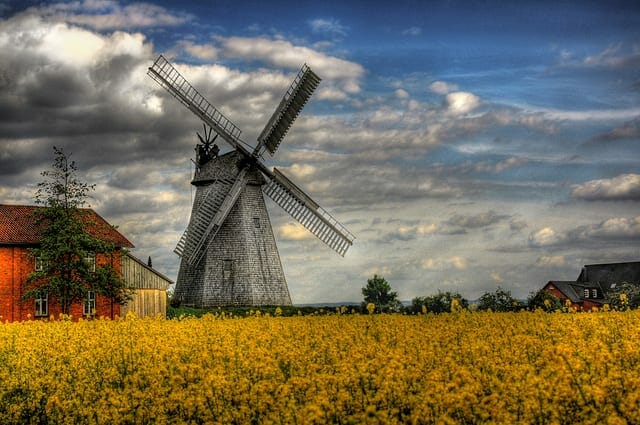 Last week, the Green Organic Dutchman (TGOD.T) gave the market a look at their second quarterly earnings release since having gone public in May. The release highlighted the company’s capital raising success and their ongoing buildout. The company is using strategic acquisitions and partnerships to form a strategy for international expansion.

Since March 24th, 2017, the TGOD we know today raised a total of $448 million in primary stock offerings in the service of creating one of the larger and more unique public cannabis companies in this weed boom. A focus on innovation and product development has insulated TGOD from being measured against other ventures in terms of patients, sales or production. Their ambitious builds in Hamilton, Ontario and Valleyfield, Quebec are backstopped by a $22 million contract with construction giant Ledcor, showing the market that they’re serious about building cultivation facilities, and have the bankroll to do it. The Dutchman holds a cash balance of $261 million, with no debt.

Counting only primary raises (not accounting for exercised warrants or options) TGOD has raised a total of $448 million since March of 2017. Thanks to pre-ipo rounds offered to retail shareholders, TGOD claims excellent distribution, with more than 20,000 different shareholders holding 233.8 million outstanding shares of TGOD stock. For the most part, pre-ipo TGOD rounds are subject to a six month hold starting from the date of the IPO (April 30th, 2018). That puts the majority of the TGOD float free trading at the end of October, 2018. 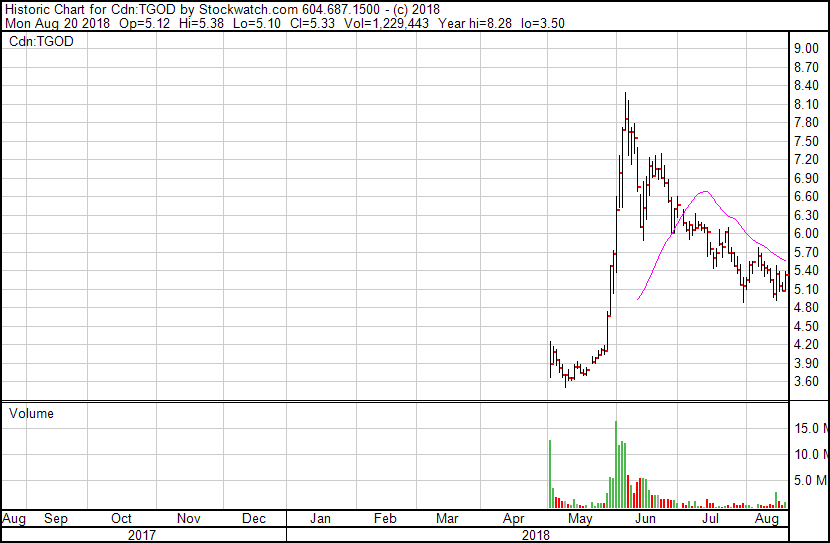 Dutchman shareholders are a passionate bunch. They took a tightly held stock for a ride up to $8.28 shortly after the IPO, and have watched it settle down to a more manageable $5.20 range more recently. A health scare for CEO Rob Anderson this past July saw his transition to a role as Chairman, and Brian Athaide stepping in as CEO. Between now and Halloween, Athaide will be working on making TGOD a key part of a newly minted Canadian retail cannabis market. Their unconventional, product and tech-focused approach is one that relies on message control. In that sense, it may be the perfect strategy to find buyers or holders for the 182 million shares due to become free trading.

Product innovation is a cornerstone of TGOD’s corporate character: the company labels itself a “a cannabinoid-based research and development company” with the aim of “building a portfolio of patented and approved cannabinoid-based medicines.”

In May 2018, TGOD announced an exclusive agreement with Stillwater Brands to license their soluble cannabinoids technology within Canada and international jurisdictions outside of the US. The technology is billed as a way to get cannabis into food and drink products with out adjusting the flavour and without first making it fat soluble.

TGOD know what TGOD do… and TGOD done did it again!
In Q4 2017, the product grown to secure a license for TGOD’s Hamilton facility from Health Canada was used exclusively for R&D purposes. Research and development costs for Q1 2018 totalled $796,000 while Q2 2018 R&D costs amounted to $1.3 million.

TGOD’s two Canadian facilities are located in Valleyfield, Quebec and Hamilton, Ontario. The former currently acts as their R&D kitchen, providing an analytical and microbiology laboratory for product development. The company has earmarked $55 million for the construction of four more R&D laboratories.

Facility I is an already completed modular extraction lab in Hamilton, Ontario, designated for producing oils and cannabis beverages. The under-construction Facility III is located on the Hamilton facility’s property and will aim to push the boundaries of cannabis development, experimenting with disease-resistant strains and documenting the effects of cannabis’ complimentary effects with other drugs.

Facility II is 2,700 square feet genetics and breeding facility in Valleyfield, Quebec which is developing proprietary cannabis strains and is considered the company’s flagship project. Facility IV, also on-site, will provide information on subjects like cannabis genealogy and genetic repeatability from its home in Quebec.

Facilities III and IV are at various stages of completion, expected to be finished in Q4 and Q3 respectively. “The foundations for each facility have been laid and the larger greenhouse materials have been ordered and are being processed by key vendors,” according to the company.

The next milestone for TGOD is the completion of each facility’s structures. The $22 million Ledcor contract is meant to oversee the construction of the greenhouse in Hamilton, Ontario. As of Q1, TGOD had committed $3.3 million dollars toward the facility’s completion, before a recent delay at City Hall.

Plans to turn the Hamilton site into a working greenhouse hit a snag in July when Hamilton’s city council voted to reject a zoning amendment which would have allowed the company to build up to one million square feet of growing space in a city where growers are only allotted a maximum of 24,000 square feet.

The original plan was for the Hamilton facility to be 150,000 square feet, with a capacity that the company estimates at 14,000 kilograms. Valleyfield is more ambitious, exceeding one million planned square feet and having ten times the estimated capacity of its sister facility in Hamilton.

TGOD is filing an appeal to the city’s ruling, and has said that if it isn’t accepted, that the Company may transfer capacity to its Valleyfield site. Valleyfield construction is on-schedule and is expected to begin cultivation in the first half of 2019, according to the company.

The ACMPR license that allows the company to produce in Hamilton is held through The Green Organic Dutchman. The Green Organic Hemp pursues opportunities concerning industrial hemp cultivation and hemp-derivative products.  TGOD leased its Valleyfield property through their Medican subsidiary.

The company is in the advanced stages of acquiring an interest in Epican, described as a vertically integrated Jamaican operation. In July 2018, TGOD’s strategic partner Epican opened its first retail location in Kingston, Jamaica. Epican plans to open five dispensaries in Jamaica. The company currently reports a 1,300 kilogram per year production capacity, and TGOD has entered into a binding agreement to acquire 49.18 percent interest in the company.

TGOD has begun acquiring their interest through the advance of US$450,000 to Epican Medicinals in convertible notes, and appointing two officers to the board of Epican’s subsidiary Epican Canada.

The company is in an earlier stage with plans to establish a toehold in Denmark.

TGOD signed an LOI for a joint venture in June 2018 with Knud Jepsen, a Denmark-based horticultural and plant breeding company which possesses a combined 1.3 million square feet of greenhouses. Knud Jepsen is the world’s largest breeder and producer of Kalanchoes, distributing over 35 million finished plants throughout Europe each year. If the JV becomes licensed and is legally capable of exporting cannabis from Denmark, 200,000 square feet of greenhouses could be converted for cannabis cultivation.

An illustration of biological asset value

International Financial Reporting Standards require pot companies to account for the fair value of the live plants they are cultivating on their financial statements as biological assets. The process by which they’re valued isn’t an exact science, and it means about as much as any other asset line from the balance sheet of a venture stage company (very little), but the biological asset line can give us an idea of the size of these operations from quarter to quarter.

The profile cut by TGOD’s biological assets is one of a company who got its license, and has since grown only enough to do some sampling and testing.

Hydropothecary and Organigram’s operations are on the small side for pubcos. They’re included here to give an idea of the biological asset profile difference between a commercial operation and a research operation.