What a difference a day, or fourteen, can make.

International Frontier Resources (IFR.V) just dropped news I suspect no one saw coming. I didn’t see it coming! It snuck right up on me.

Things appear to have taken a complete one-eighty down on the company’s Tecolutla Mexican onshore oil and gas block – that’s where we’ll find TEC-10.

First, a brief review of what International Frontier’s got, and how events have played out thus far…

Tonalli Energia – a joint venture IFR formed with Grupo IDESA – are developing Tecolutla, a block which lies within the Tampico-Misantla Basin, a prospective onshore ‘Super Basin’ with huge unconventional oil and gas potential. 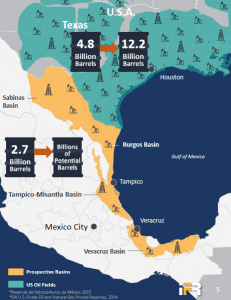 Earlier this year, we were excited for Tonalli when they commenced testing their TEC-2 well. On May 16th, the company reported the recovery of 125 barrels of oil per day over a seven-day test. That was welcome news. It seemed to bode well for further tests along the reservoir.

On June 20th, the company announced the commencement of production testing on its TEC-10 well. This is what the market was waiting for. This is where Tecolutla was going to prove once and for all that it had the right stuff sloshing around in its subsurface reservoir.

Then on July 23rd, the company announced initial flow rates for TEC-10.

The news was not what the market had been expecting. Initial flow rates were low, and quite frankly, very disappointing.

Gutted, apparently, the market responded with its typical myopia – its typical chicken shit, ‘SELL and Run Away’ mentality. 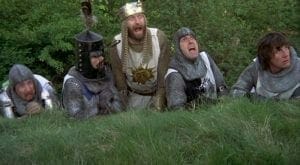 image courtesy of The Mary Sue

Boldly, Equity Guru’s Chris Parry dove right into the bad news. He called the company’s president and CEO, Steve Hanson, looking for answers. What Parry extracted was a detailed interpretation of the subsurface topography of TEC-10, and the anomaly thought to be the obstruction impeding the wells flow rates. Give it a read, here. You won’t be disappointed. Trust me. You’ll even find out what a ‘Karst’ is.

The skinny on the July 23rd news drop…

Basically, the three intervals the company was testing at TEC-10 were not demonstrating sufficient flow. These initial results were poor, uneconomic.

The (lack of) highlights outlined in this release…

There was a note, inconspicuously penned into the text of this July 23rd release. It simply stated, “Tonalli will continue to test to observe flow rates and oil cuts.”

I remember reading that and wondering, “what are the chances we’ll see improvement here…”?

As mentioned earlier, I didn’t see this news coming.

In many respects, this latest news drop completely contradicts the initial finds. It suddenly adds reams of validity to the development potential for TEC-10 and the remaining resources at the Tecolutla field via additional wells and workovers.

Highlights from this 18-day flow test of the primary TEC-10 zone:

One needs to appreciate the turnaround here. TEC-10 appears to have found its mojo.

As you can see in the above chart, the market is currently attempting to digest this about-face. So far, it appears to appreciate the significance of the new data.

“IFR is encouraged by the economic results obtained over the extended production test including the increase in oil production and the high deliverability of the TEC-10 well. The results from TEC-10 are a significant improvement from the initial figures released and show great promise for development of the field.”

Damn straight these results are a ‘significant improvement’. A modest guy, IFO’s CEO.

Take a minute or two and study the graph below… 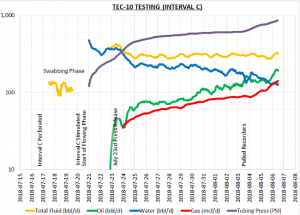 Note how the oil and gas values (green and red), along with the wellhead pressure psi (purple), have risen sharply while the water component (blue) has dropped off markedly. I can only imagine management’s excitement as these numbers began to rise.

This positive data lends validity to Tonalli’s technical model, a model which suggests that Tecolutla’s existing vertical wells have only partially depleted the El Abra reservoir at the interval depth they are currently probing.

There’s more to this news release…

Plans for the company’s TEC-11 horizontal well are underway. 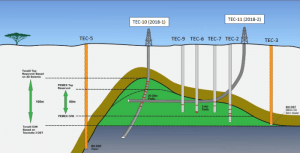 Tonalli is planning to commence construction of the surface pad site for the first horizontal well (“TEC-11”) within the next few weeks and expects drilling operations to commence in late Q4-2018, subject to final regulatory approvals. The TEC-11 horizontal well will be drilled in the Northern extension of the Tecolutla block targeting a portion of the El Abra reservoir that has not been accessed due to surface topography. 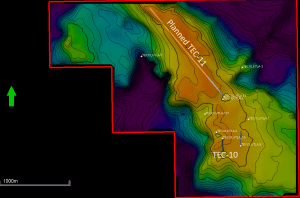 This new well will be drilled from the existing TEC-2 surface location and utilize the knowledge obtained during the drilling and completion of the TEC-10 directional well. Tonalli expects that the reprocessed 3D seismic data and application of horizontal drilling will mitigate the risk of encountering localized geological features that limit well performance. The TEC-11 Horizontal well is designed to maximize the contact of the Horizontal leg of the wellbore with the upper portion of the prolific El Abra reservoir.

This is an exciting development. With the aid of 3D seismic, this horizontal well could tag the reservoirs sweet spot. Translation: it could yield hugely significant oil production.

The company has 145.2 million shares outstanding. That gives it a modest market-cap of $23.2 million. It’s important to note that management’s interests ride right alongside those of current shareholders – they own 32% of the shares outstanding, 39% fully diluted.

Speaking of management, this is a well-seasoned team with a number of overlapping skill sets. Their resumes can be perused here.

This is a company to keep a close eye on if you’re looking for exposure to oil and gas. When Mexico finally decided to open its gates to foreign companies to help develop it latent O&G potential, International Frontier emerged as one of those classic ‘early-mover’ entrepreneurial stories. They were among the first, and they knew exactly what they wanted – a piece of the Tampico-Misantla Super Basin.

In Chris Parry’s piece a few weeks back, he stated he was taking advantage of the price weakness created by the disappointing July 23rd news. That may prove to be an extremely canny entry (add) point.

FULL DISCLOSURE: International Frontier is an Equity Guru client, we own the stock.