On August 1, 2018 Sproutly (SPR.C) announced that it has completed the acquisition of Infusion Biosciences Canada and SSM Partners.

Biosciences is the inventor of the patent-pending Aqueous Phytorecovery Process (APP) which represents a “fundamental paradigm shift within the cannabis industry.”

“If you can take the good stuff into a soluble form without having to mostly destroy its inherent goodness,” wrote Parry, “you’re on the shelves at Loblaws the moment everything is legal.”

Canadian Venture capitalist and TV personality Kevin O’Leary mused that investing in the weed market, was like “getting an opportunity to get into alcohol after prohibition just ended.”

Our talented friends at The Visual Capitalist break it down like this: 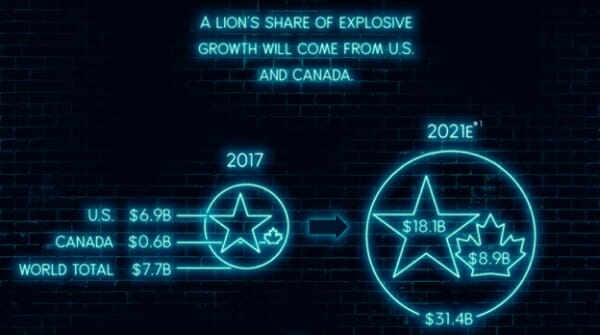 According to research from The Brightfield Group, the size of the legal cannabis sector is expected to surge from $7.7 billion to $31.4 billion between 2017 and 2021.  Currently the recreational market makes up only 37% of the global total – but by 2021, that will rise to 57%.

Sproutly CEO, Keith Dolo is a former of Vice President at Robert Half (RHI.NYSE) – a finance/management co. that booked 2017 revenues of $5.3 billion.

It’s a safe bet that Dolo is not here for the monthly paycheque.

He’s here to conquer the world. 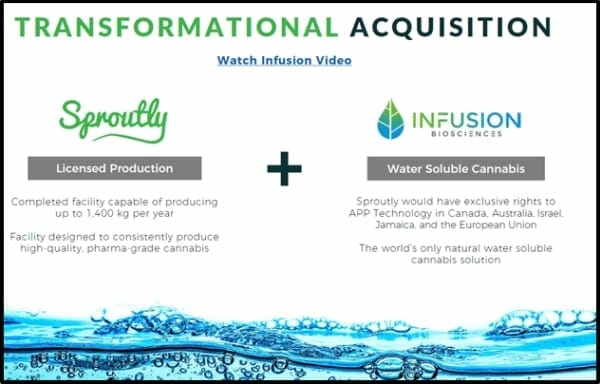 In small cap companies, the CEO has bisected duties: 1.  To run the company 2. To communicate clearly and honestly with shareholders.

The value of the 1st duty is obvious.  The importance of the 2nd duty is sometimes overlooked by retail investors.

We received some good Sproutly questions from EG readers.

We forwarded your questions to Dolo.

Question: I’m interested to learn about the competitive environment for your technology.

Dolo:  The competitors out there have not been working on water solubility but water compatibility.  They are all focussed on oils being encapsulated or emulsified into a liquid.

Question:  What patent protections do you have against future competitors?

Dolo: Infusion Biosciences patent is currently pending and it will stay pending in order to protect the secrets of the discovery.

Question: What is the impact on Sproutly if another company does focus on “water solubility”?

Dolo:  We can’t say that no one will ever try to replicate or discover what IBS has achieved.  But it has taken six years of research by a PHD in biochemistry from Princeton to unlock this ground-breaking discovery.  It will be difficult for anyone to replicate, and if they do, our patent covers the process and the reagents together.

Question: Who owns the US rights to the water-soluble tech?

Dolo: Infusion Biosciences parent owns the rights for the US so it is still closely held as their two founding partners will become employees of Sproutly at the transaction.  We decided not to pursue the US rights or acquisition as we wanted to stay away from any involvement or tie into the US for the time being.  We will look to expand there when the federal regulations ease.

As stated in a previous Sproutly article, “the APP technology doesn’t just provide nebulous health benefits, it changes the uptake and release cycles of cannabis ingestion.”

That means you can go to a social lunch, consume a water-soluble cannabis beverage, walk back to your office, and re-engage with your professional duties. It also means you can unwind at dinner, and still be able to read a novel before you go to bed.

We think that’s a big deal. 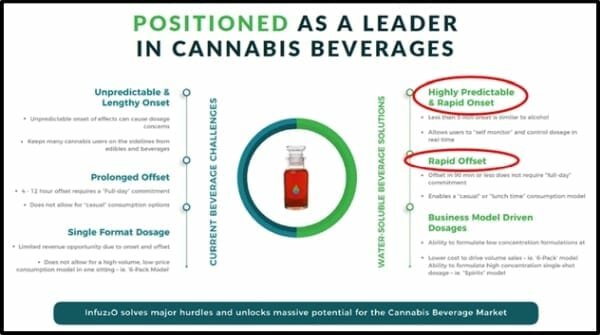 The Biosciences acquisition, “enables Sproutly to commercialize the APP Technology in major regulated markets around the world with innovative cannabis products that target the $50+ billion bottled water and functional beverage market.”

Infuz20 is Sproutly’s first beverage manufactured with the patented technology.

“As a natural water solution, Infuz2O is the best means to deliver the medicinal benefits of cannabis to patients suffering from symptoms associated with major chronic diseases like cancer and pain”, stated Dr. Arup Sen, CEO of Infusion Biosciences.

It is expected that Dr. Arup Sen will assume the role of Chief Science Officer at Sproutly, and join the board of directors.  He has a monster resume.

“APP Technology is a low-cost, gentle method to produce Infuz20, a ground-breaking discovery that delivers the total effects of the strain of cannabis from which it is made,” stated Dolo, “On-set effects start within approximately 5 minutes and dissipate within approximately 90 minutes.”

Full Disclosure:  Sproutly is an Equity Guru marketing client, and we own stock.