International Frontier Resources (IFR.V) slammed after drill hits sinkhole, but the climb back has begun

A 50% drop in stock value is a tough day for any resource company executive, but when that executive owns more stock in that company than anyone else, it’s a particularly forceful boot to the nards.

Steve Hanson, President and CEO at International Frontier Resources (IFR.V), had been doing the work, drilling out a Mexican oil concession his company acquired when the Mexican government finally decided to open up its landscape to foreign companies, and acquiring the largest position of stock in the company. That’s what you want in a CEO – a true believer who puts his money next to yours.

But one of the holes IFR was going after, known as TEC-10, sadly, wasn’t what the company had hoped it would be. Or, at least, the way they came at it wasn’t the right way to come at it.

The effect on the stock was dramatic, with 50% coming off the valuation of the company. In the days since, however, a climb back has commenced. As the dust settles, we feel the company is a good value buying opportunity, but first let’s look at what happened to get IFR here.

Here’s the inside baseball version (emphasis ours):

Since reaching total depth, Tonalli has utilized the modern well logs from TEC-10 to perform a prestack depth migration of the 3-D seismic volume to give a more precise image of the top of the El Abra. This PSDM seismic has provided an explanation of the TEC-10 well results by identifying localized karsting or sink-hole type features along the top of the El Abra. These localized karsting features are filled with non-reservoir shales and mudstones that do not contain hydrocarbons.

Tonalli’s interpretation of the PSDM seismic and the TEC-10 well logs indicate that the directionally drilled TEC-10 well encountered a small vertical karst feature at the prognosed top of the El Abra formation then exited this karst lower in the El Abra. This resulted in TEC-10 encountering non-reservoir shales and mudstones at depths where Tonalli expected the El Abra reef to be structurally high and have good reservoir quality.

When the market saw this, it had a fit. Down went the stock, hitting a 50% shred that kept heading down to the end of Monday trading. 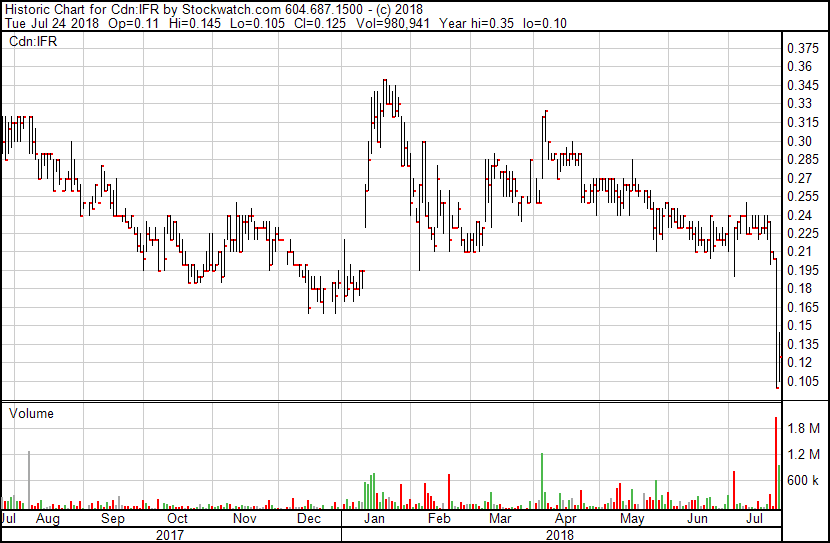 Tuesday saw stability return, and even some upward price movement, as resource junkies took in the news and reassessed whether IFR just became a value purchase.

To figure out if that’s the case, you need to get a sense of whether this was a delaying blow, or a fatal blow.

So I called Hanson to see what his thoughts were and, I gotta say, you could hear how gutted he was on the phone, not at the project news necessarily, rather at the way it had been received by the market.

“It’s been a day,” he said, clearing his throat. “I’m not going to tell you the market over reacted, because that’s not my job. I am going to say, we have options at our disposal and we’re putting together a plan to clarify the potential of the reservoir.”

You hear that in these situations – we have a plan, it’ll all be fine.

Within an hour, however, part of that plan – the part where the company actually explains what just happened – became clear, as Hanson’s team put together a powerpoint presentation to show what their data found.

But before we get into that, let’s go through what happened so far.

In layman’s terms. First, what the hell is a ‘karst’?

Karst is a topography formed from the dissolution of soluble rocks such as limestone, dolomite, and gypsum. It is characterized by underground drainage systems with sinkholes and caves. […] Subterranean drainage may limit surface water, with few to no rivers or lakes. However, in regions where the dissolved bedrock is covered (perhaps by debris) or confined by one or more superimposed non-soluble rock strata, distinctive karst features may occur only at subsurface levels and be totally missing above ground.

In other words, sometimes rocks dissolve when water runs across them, and sometimes these rocks form sinkholes and caves. You can sometimes see those on the surface, but sometimes they get covered over by dirt, sand, trees, rocks, water, etc.

These can sometimes become the basis for oil reservoirs, because it’s easier for liquids to move into empty space than it is to force rocks apart. Karsts can be a good thing and, in fact, over 50% of the world’s oil and gas fields are hosted in porous karsts.

The problem, in this case, was the top of the karst, which was not porous, had long ago fallen into the reservoir, deep underground where nobody could see. So you have a big fat patch of oil, and a big mess of rocks dropped into the middle making it muddy in a given spot.

IFR happened to drop its drills right into the middle of the non-porous rock, and got poor results because of it.

While the drill did pass through the non-porous rock into the reservoir proper, that reservoir had previously been welled by Mexican producers, so the top of it features more water than oil. 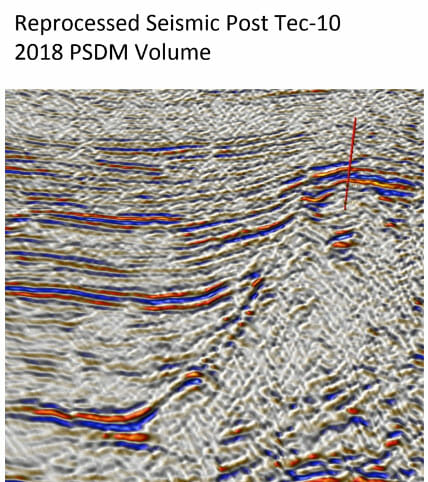 We even have pictures!

So IFR ran through their seismic imagery and this is what they found where they’d drilled. You can see under the drill path that little squiggle of colour. That’s the glitch.

The big grey void underneath is your reservoir. The top of that reservoir has been somewhat drained by earlier producers. The rocks that have fallen in were right in the path of the drill. Then comes the big unknown underneath and to the sides.

Here’s a close up: 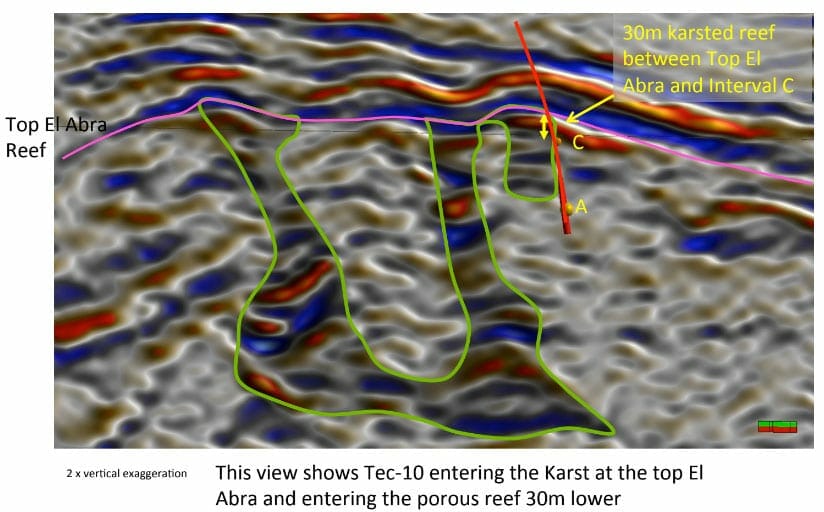 The shadowed ares above, that’s rock that doesn’t hold oil. Where the drill line runs, you can see it nicked the cave-in, then came out to hit the top of the reservoir, which earlier shallow offset drills would have sucked out somewhat.

It’s important to understand, none of this means there’s no oil there. And it doesn’t mean it’ll be impossible to drop drills in other places where the results will be better. In fact, now the company knows a lot more about where to go next.

“The information obtained by drilling TEC-10 has provided the necessary information to develop the remaining resources of the Tecolutla field with additional wells and workovers,” stated Curtis Hess, vice-president of exploration. “Our understanding of the El Abra reservoir has greatly improved and Tonalli is in the process of developing a horizontal drilling development strategy based on this knowledge. “

One option would be to simply drill deeper into where the problems up top are likely to not exist. the downside on that is, maybe you hit more obstructions.

Another option would be to just abandon ship on this plot and go buy a new one at the next round of Mexican oil auctions. Feh. You’ve come this far…

The best possible solution for IFR will be to sling their drills in sideways. Horizontal wells have much more prolific rates then vertical wells, because they have the potential to intersect more porous rock. They’re also great for passing through a vertical rock drop and getting to the oil on either side.

The downside: That’s not cheap, and raising money at a stock price that just halved is a situation nobody wants to embrace. Hanson says his company has money enough to keep moving forward and has no immediate plans to raise more dough at a place where it would dilute the share base heavily.

And, today, I heard word that IFR’s JV partner, Tonalli, is indeed prepping to launch its first sideways drill run, so we can expect more data, and a better aimed path, going forward.

The fact that we have these detailed images that show where the nasty rocks are comes from Hanson’s team digging through the drill data, and previously acquired 3D seismic data, and historic data from old well logs, and frankly anything they can find painted on the side of a cave in ancient beet juice by prehistoric tribesmen, to correlate what they now know with what the data shows. It’s a good sign, for mine.

That’s 24 hours it took to get the bad news, reassess, and emerge with a whole explanation and a new plan moving forward. Solid work.

I’m not going to tell you to go buy IFR stock, because I don’t do that. But I’ll tell you this: I’m buying, especially at a 50% discount to what it was a week ago.

The macro trends in oil and gas are looking good to me, the prospects of cheap to produce, massive quantities of Mexican oil are solid, and I love that Hanson’s response to this situation was to not make wild promises, and not run for the hills, but to lay it all out and head to a solid plan B.

FULL DISCLOSURE: International Frontier Resources is an Equity.Guru marketing client, and the author will own stock in the company at the open.

UPDATE – 25/7/18: Two days since the fall-off, IFR stock is starting to march up. I bought this morning and am already sitting in profit. 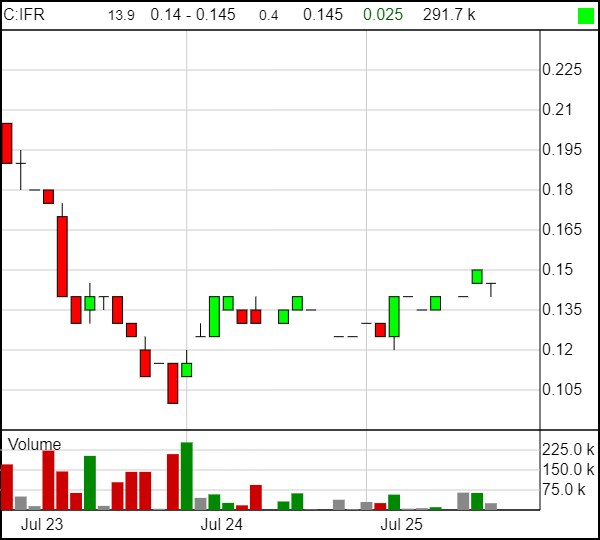