Many that follow the resource space believe the state of California is a no-go when it comes to developing mines. The fact is, mines do get built there. Case in point: Soledad Mountain – a fully permitted, open-pit, heap-leach gold and silver producer in Mojave, Kern County, California.

California is NOT a ‘no mining’ state – it’s a responsible mining state.

Delving deeper into the state’s permitting process, I learned that the county where the deposit resides is a HUGE factor. The county can wield enormous influence over the decision to build, or not build a mine.

Our key advantage is, the local county can elect to become the lead agency for permitting, environmental, etc. And Mariposa County has 18,000 people who could use the economic push a mine would bring the county. If you know your California gold rush history, this area was so actively involved in mining, you see the streets are literally named after mining history – Bullion Street runs right through the center of town. There’s more ranching now, but mining has a deep root there, a lot of people have family in the mines. We’ve met with the county several times and they’re open to new businesses coming in and mining responsibly. Their view is most of the jobs there currently are lower paying, and mining brings a higher priced wage. 150 high paying jobs in a county of 18,000 people is a big deal.

I think the market is collectively breathing a sigh of relief with this news – it has taken longer than expected to get these critical permits. ‘De-risk’ is the key word in the above headline.

The receipt of the drill permit is a significant milestone for the Company and represents the government and community support for the continued exploration and development of the Blue Moon Deposit. We continue to reach new milestones at the project, as we look to further de-risk the deposit and highlight the robust nature of the high-grade resource. Our technical team has identified new drill targets and potential new zones through the analysis of historical data to further enhance and expand the known resource at the project. We will look to update the market shortly on timing and focus of the Phase One drill program, and I would like to thank our shareholders for their patience as we systematically and methodically advance the project.

Sounds like it’s game on to this humble observer…

… especially if you appreciate the pedigree of Blue Moon management, the deposit… and zinc.

I like VMS deposits. They typically occur in clusters. Where there is one (lens), often there are others.

Four lenses of mineralization have been identified to date, all within two – perhaps three – near vertical stacked horizons inside a 15 to 55-meter stratigraphic interval. 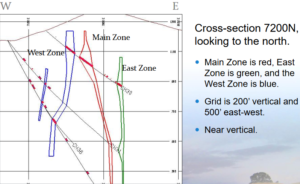 As I mentioned earlier, these types of deposits often occur in clusters.

The existing mineral resources are open to the South and at depth.

Possible extensions to their West, Main and East zones have yet to be tested.

There’s a trend of coincident soil and IP anomalies within favorable felsic volcanic rocks which have yet to see a proper probing with the drill bit.

This can often be a deposit killer. In many cases, even with high-grade ore bodies, it all boils down to a deposits proximity to roads, rail, power, water, etc.

Blue Moon is only a short three-mile jaunt from pavement via gravel road.

A hydroelectric plant is likely within sight of the property, its main transmission line passes within a short distance.

The Port of Oakland is only a three-hour drive from the property – rail and trucking routes are all easily accessible.

Labour and industry contractors are also close at hand in communities along the Central Valley.

The coarse-grained nature of Blue Moon’s sphalerite, chalcopyrite and galena allows for easy separation of the valuable metals from the pyrite. This means good recoveries.

Conventional flotation will give the company multiple concentrate options.

The highlight of this article is the news which dropped July 20th 2018. Drilling is always a potent catalyst. In this case, the company is planning both infill drilling (increasing the confidence level of the current resource), and exploration drilling. There are multiple areas the company wants/needs to test for additional deposits along strike. Exploration drilling is what drives most of the speculation in this sector. IMO.

There’s also a Preliminary Economic Assessment (PEA) incoming which should give us a good sense of Blue Moon’s current economics. Continued metallurgical test work and baseline environmental studies may eventually lead to a Feasibility Study.

This news release was very positive. It erases many of the doubts investors may have had about Blue Moon.

It’s worth noting that there has been some consolidation in the zinc space. In June 2018, South32 acquired Arizona Mining for US $1.6B – Arizona Mining’s zinc asset was purchased at the PEA stage.

I’m looking forward to seeing Blue Moon’s drill rigs roll off the flatbed. News on that front is next.