Junior exploration stock investors seem to have gone from dejection, to resignation and withdrawal… to a full-on rout.

Gold stock portfolios are being dismantled, positions are being tossed on the scrap heap – there’s little regard for value, price, or exit strategy. People just want out. There’s only so much price chart erosion one can take, I guess.

Of course, there’s something to be said for the old adage, ‘you’ve hung around for the pain… you might as well stick around for the gain’ (something along those lines). I think it was Rick Rule who first uttered those words. Good words. Apt words. And in my experience, the ‘gain’ part of the proverb is a foregone conclusion. Price gains in this beleaguered, downtrodden, woebegone sector are inevitable (we stand to watch).

Gold and gold stocks: we’ve tallied a number of reasons to buy, compiled a surplus of rationales to continue to own it. I list a few here. Equity Guru’s Lukas Kane lists a several valid points there. I think Doug Casey really nails it best though:

“Gold has been used as money for thousands of years because it has a unique combination of qualities. Very briefly, it’s durable, easily divisible, convenient to carry, consistent around the world, and has value in and of itself. Just as important, governments can’t create gold out of thin air. It’s the only financial asset that’s not simultaneously someone else’s liability.

I think the above statement was first coined by Casey decades ago, but even today, here, now – at this juncture – it’s worthy of a mic drop. In the weeks/months/years to come, I believe gold is destined to become cemented into our international monetary system.

A little over a month ago, the scribes here at Equity Guru couldn’t help but admire two pieces of news flowing out of Serbia and Bosnia of eastern Europe – a region known to be highly prospective for porphyry and epithermal gold / base metal deposits. 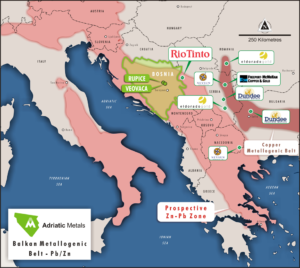 The piece was called Medgold (MED.V) and Adriatic (ADT.AX): two significant hits within 24 hours – what are the chances?’

Neither Medgold or Adriatic Metals are current Equity Guru clients. But we’d be remiss in not bringing these two companies to your attention. We appreciative the fundamental value evolution in both of these deals.

Obviously the company’s share price reacted to the news, even in this ‘beleaguered, downtrodden, woebegone’ market …

As I stated in my June 13th piece on the company…

“Sixty-four meters of gold, on its own, or any of the above metals in and of themselves, would have been significant. I haven’t crunched all of the numbers to see what a ton of the above rock might be worth, but the precious metals alone are good for US $481 per ton.”

Immediately after the above results were tabled, the speculation was that Rupice – a near-surface sedimentary-style deposit – was open for significant expansion at depth where metal tenor appears to improve significantly. 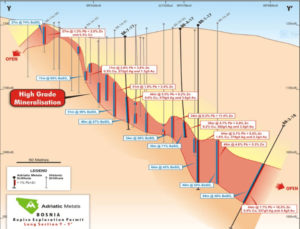 The headline number in a hole that was drilled to test the northern down-dip extension of the known zone of mineralization returned two intervals. Assays for Hole BR-3-18 included…

After a bit of a brouhaha developed over on a popular investment forum involving the company’s shares, Adriatic decided to halt trading, go on the record and respond to the ‘media speculation’.

On that same day, the company announced that it had received assays from two holes, both of which were drilled to test the eastern flank of the Rupice North area. Both holes returned ‘No significant assays’.

I’m certain that in an auction arena teeming with heightened levels of nervous tension, many ‘investors’ thought the jig was up. Guess again.

One day later, on July 16th, the company dropped the following news headline…

From where I come from, that’s another drop-the-mic worthy hit (note the elevated copper/zinc values).

Rupice is shaping up to become a Tier 1 asset. With each successful stepout, particularly along strike to the north where mineralization thickens and metal tenor improves at depth, the company is adding valuable tonnage. 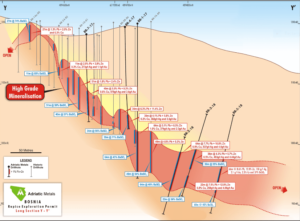 This is the kind of high-grade deposit that attracts easy development funding this day and age. This is also the kind of deposit resource hungry predators – producers’ – are looking to acquire. My guess is that Rupice will not go cheap if that scenario were to play out.

BR-5-18 represents not only another significant extension to the north and once again down- dip at the Rupice North Zone, but it also demonstrates a remarkably consistent geology, thickness and a high-grade metal assemblage akin to the other holes we have drilled in this area. Our ongoing exploration programme continues to enhance our understanding of the stratigraphic and structural controls on the mineralisation corridor at Rupice North.

CEO Harris went on to add…

It is also interesting to see such strong chalcopyrite mineralisation in this hole, very similar to the grab samples taken at the Jurasevac adit. Our drill program is increasing in intensity based on the recent spectacular results and we will now expand our drill testing of the prospective mineralisation in several of the directions where the mineralisation remains open.
.

I believe the company currently has three drill rigs turning on site with a fourth slated to join the party any day.

News-flow will be steady with > 10K meters remaining to be drilled.

On June 11th, Medgold (MED.V) pulled a nice (discovery) hole out of their flagship Tlamino Gold Project in southern Serbia. 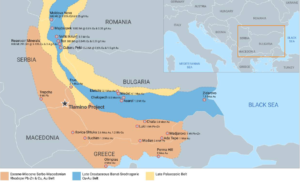 This is what got the ball rolling…

This was a true ‘discovery hole’. It was drilled to follow-up stellar channel sampling results from their Barje Zone – 84 meters of 5.60 g/t Au and 105 g/t Ag – released last summer.

I’ve been running a rant in many of my articles how I believe ‘discoveries’ are rare beasts at this stage in our evolution on this planet – we’ve wiped nearly all of them out… the obvious ones anyway. Not only is Tlamino a new discovery, it’s one with tonnage potential, and grade. It’s also at surface and flat lying. This is a rare combination… an extremely rare combination.

Once again, note the depth of these holes. Also, note the elevated silver values for the 6 meter included section of BAR003.

Commenting on these results, Dan James, President of Medgold stated…

The drilling at Tlamino continues to demonstrate a strongly mineralized system, associated with a large flat-lying detachment structure. With only 4 holes, we’ve already highlighted the potential for 290 m of up-dip continuity. We are also seeing zones of significantly higher gold and silver grades within the broader intersections, such as 6.0 m of 4.20 g/t Au and 754 g/t Ag in BAR003 and 2.0 m of 23.88 g/t Au and 340 g/t Ag in BAR002, which are associated with intense brecciation. We’ve now completed our initial drilling and have achieved our initial objectives. Drilling has paused while we interpret the geology to prepare for a second phase to commence next month.

A little over two weeks later, the company printed the following headline… 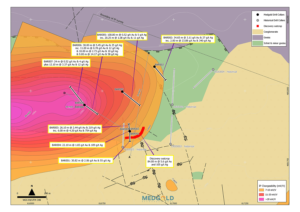 What we know so far…

Tlamino’s mineralization encompasses an area of at least 300 meters by 200 meters.

The mineralization is closely associated with an IP-chargeability anomaly which extends at least 700 meters further to the west for a total area of approximately 1,400 meters east-west and 500 meters north-south.This could be a very large system.

A large-scale detachment structure is likely responsible for the high-grade mineralized beccias Medgold is honing in on.

And according to this recent release, the hanging wall – the wall on the upper side of their high-grade mineralization – is anomalous in gold over broad thicknesses.

We are delighted to have identified gold mineralization in all of our first 7 holes at Tlamino. We’re seeing multi-metre high-grade gold intercepts within very broad zones of low- to moderate-grade rock over a large area, and in some holes the mineralization starts at surface. The gold mineralization is flat-lying, near-surface and associated with a large-scale regional detachment fault. We’ve confirmed a strong relationship between IP-chargeability, disseminated sulphides, and gold mineralization which gives us sufficient confidence to plan for Phase 2 drilling to start later this month. We aim to expand the known mineralized area by systematically testing the IP anomaly towards the west. We believe we’ve made a significant gold-silver discovery at Tlamino. The discovery highlights the tremendous exploration potential of Serbia and we’re looking forward to expanding our generative work in country.

The company is indeed following up these very positive results with a phase II drilling campaign scheduled to begin shortly. The program will include a minimum of 3,000 meters of drilling. The ultimate aim is to drill-test an area of 1,400 meters by 500 meters.

Also of great interest, the company is planning to conduct an IP program (Induced Polarisation-Resistivity) over the 2 kilometer by 2 kilometer ‘Karamanica’ soil anomaly located 10 kilometers to the west of the main Barje Zone. IP-geophysics worked well picking up sulphides at Barje – we could see a repeat at Karamanica.

Details regarding the expertise of Medgold management, it’s share structure, not to mention its joint venture with Fortuna Silver Mines Inc (TSX: FVI) on the Tlamino Project, can be found here.

With a 3,000 meter program set to begin in a matter of days and the company’s goal of expanding the mineralized footprint of Tlamino by leaps and bounds, rather than by short stepouts, there’s potential for genuine excitement in the weeks to come.

That potential exists with both companies – Adriatic Metals and Medgold Resources.