Back in early 2017, iAnthus (IAN.C) needed money to fund its U.S. weed development and acquisition strategy.

In an offering stage-managed by Canaccord and Beacon Securities, IAN borrowed $20 million, agreeing to pay 8% yearly to the lenders, allowing them to convert the debt into common shares at $3.10 any time prior to February 28, 2019 – after a 4 month hold.

“In our view, the opportunities for financing leading cannabis operators in the United States is very strong,” stated Hadley Ford, CEO of IAnthus at the time, “This offering further strengthens our balance sheet to meet that demand.”

In this deal, iAnthus retained the right to force the conversion of the $20 million into shares if iAnthus traded higher than $4.50 for 10 consecutive trading days. 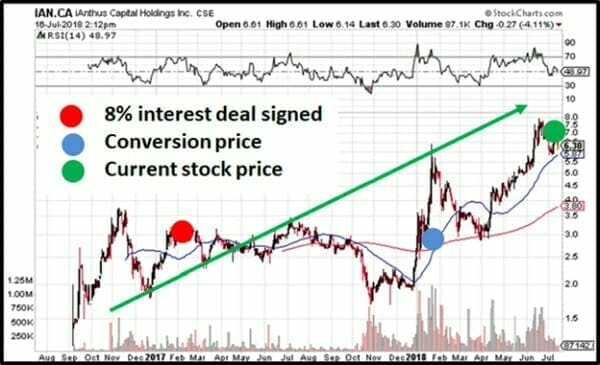 “The Common Shares have closed at a price higher than $4.50 for every trading day since May 7, 2018, stated the press release, “As of July 13, 2018, the Volume Weighted Average Price (VWAP) of the Common Shares for the previous 10 consecutive trading days equals $6.39. The Conversion is scheduled to be effective August 16, 2018.”

What does this mean for current and future iAnthus shareholders?

In New York, Florida, Massachusetts, and Vermont, iAnthus “holds licenses to operate four cultivation and processing facilities and 34 dispensaries, it also has weed operations in Colorado and New Mexico.

The CEO of iAnthus, Hadley Ford is a banking/operations/healthcare-innovator.

Ford grew a network of cancer treatment centers to $100 million in annual revenue.  He also spent 14 years on Wall Street, where he completed “over 150 transactions worth billions of dollars.

Ford is also a good communicator.  Check him out in the video below (23:48) talking about “switching roommates” – when he abandoned one deal – and replaced it with a better one, over a weekend – dodging the inevitable share price slump after a company announces, “That deal we talked about?  We can’t do it.” 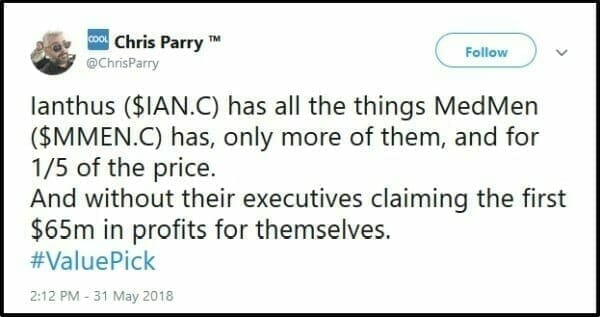 At first glance, it appears the lenders to iAnthus made out like bandits.

Not only did they collect 8% yearly interest on the $20 million, they now own stock worth approximately $40 million.

Why in God’s name would iAnthus have struck such a deal?

That means – if things go south – the investors get nada.

The weed business is not bullet proof.  The bloated bodies of the weak swimmers are already floating face-down in the surf.

It’s always worth watching where the money is going, and if – and how – it’s getting paid back.

Full Disclosure:  iAnthus is an Equity Guru marketing client and we own shares.