According to President Trump it’s OPEC’s fault, though oil pundits have pointed out the Trump’s proposed sanctions on Iran will remove about 2.4 million barrels of oil production per day – creating upward pressure on oil prices.

In January 2017, Russian oil producer LUKOIL, chose Renaissance as their partner to explore and develop the Amatitlán block in Mexico.

LUKOIL is the 2nd largest company in Russia, with million of barrels of production and 100,000 employees in 40 countries around the world.

Naturally, the Amatitlán block has been hogging the limelight.

But ROE has three other projects in Chiapas, Mexico, that just got green lit for development. 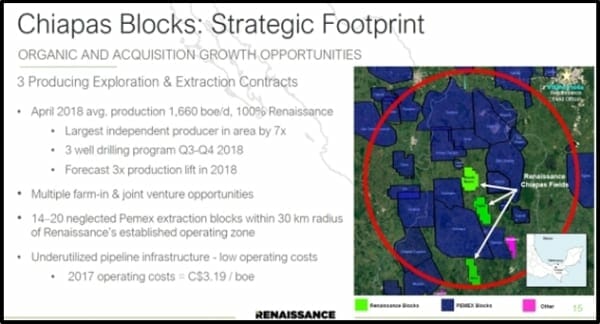 According to the July 9, 2018 press release, ROE has received the go-ahead from Mexican authorities to develop the three producing properties in the Chiapas Blocks.

This development program is designed to enhance current production and explore new formations.

The work is scheduled to begin in August 2018.

“The wells are tied into the existing pipeline infrastructure, allowing for immediate increases in production from the average of 1,643 boe/d for the month of May 2018.

“All three of the Chiapas Blocks have infrastructure in place with significant excess capacity to Pemex facilities,” ROE confirmed, “allowing for cost effective tie-ins and short cycle time to first production.”

Renaissance also recently signed a Right of First Refusal (ROFR) for the Pitepec block, adjacent to the north of the Amatitlán block.

The 61,300- acre Pitepec property is currently producing 1,487 barrels per day of light oil from shallow formations. 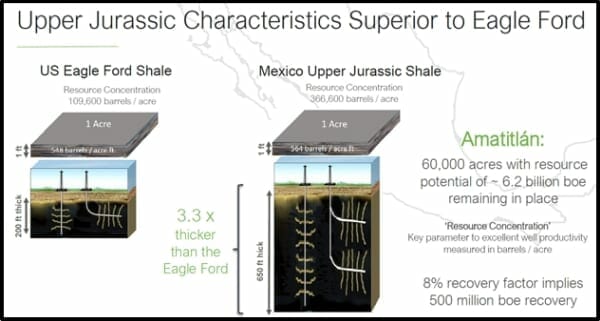 The Trump administration wants all countries to stop importing oil from Iran by November, 2018.

It’s anticipated that the Chinese may demur and chose to buy the Iranian oil at a discount.