Today I had the following conversation with a colleague.

At this point – sensing firm resistance – I pre-emptively cited the Fitch Ratings Report on Trump’s Tax Cuts and Jobs Act, which projects an additional $1.5 trillion added to the federal deficit over a decade.

Surely all those duffle bags of $100 bills fluttering like confetti from helicopters will devalue fiat currency and cause a stampede to gold equities!

My colleague sighed with paternal fatigue (despite the fact he’s barely out of his teens).

BM:  We can argue about debt-to-GDP ratios until the Llamas come home.  But here’s the real-time problem with gold.  Nobody gives a shit.  Weed, blockchain, tech, cobalt – that’s where the action is.  Go look at the biggest-volume traders on the TSX today.  I bet there’s no gold company in the top ten. 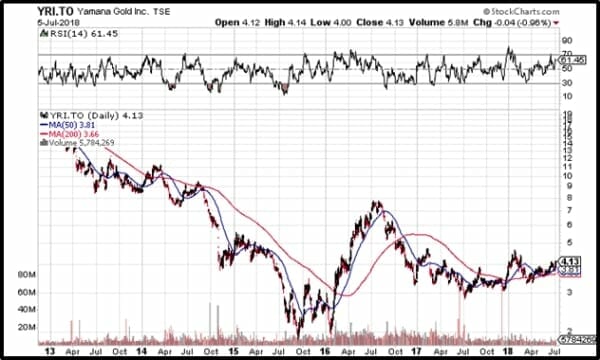 But history suggests that the junior markets will rise faster and higher.

If you’re looking for a beaten down gold company with explosive upside, Cabral Gold (CBR.V) should be on your radar.

CBR owns the Cuiú Cuiú Gold Project located in the Tapajós Region within the state of Para in northern Brazil. Cuiú Cuiú has Indicated Resources of 5.9MMt @ 0.9g/t gold (200,000 ounces of gold) – worth about $330 million CND at today’s spot price. 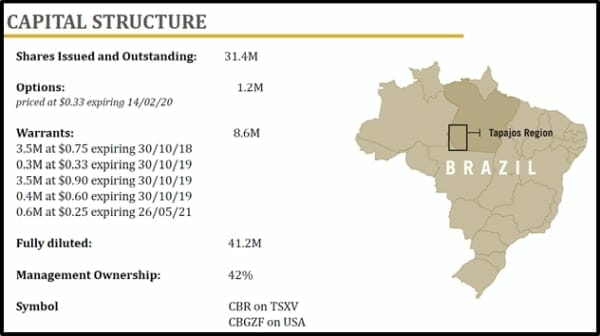 Auger drilling is used on soft rock or soil formations that don’t need heavy machinery. Three blades, attached to a hollow tube cut into the earth. The tube is able to separate the samples from the materials.

The samples are thus not damaged and can be easily analysed. Auger drilling is useless on hard rock.  But in the soft stuff, it can reach depths of 900 feet.

This is a big deal because Cabral’s Cuiu Cuiu asset is immediately adjacent to Eldorado’s (ELD.NYSE) 2.2 million-ounce TZ project which got its construction license in April 2017.  Eldorado is a $1.1 billion global gold developer with gold revenues of $84 million last quarter.

Until the current auger drilling program, the trends had not been well understood due to deep soil cover that partially masks the bedrock geochemical response. 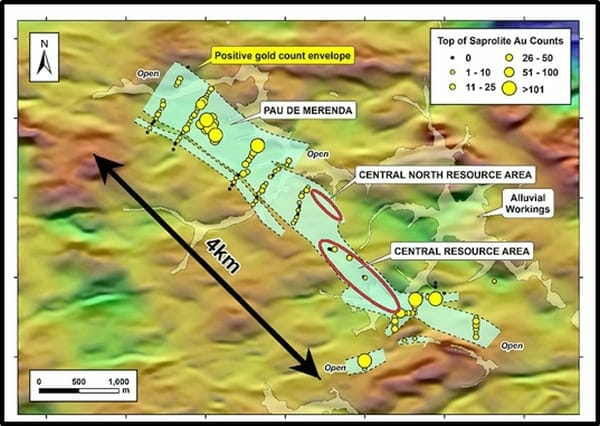 The Pau de Merenda-Central corridor is in the central part of the Cuiú Cuiú property. In the above image, targets with established resources are shown in red. Primary target zones under evaluation for drill targeting are shown in yellow.

According to the July 5, 2018 press release, “The current program of work has involved an initial campaign of channel sampling, pitting and auger drilling in the Central – Pau de Merenda corridor, to provide a more precise framework to determine drill targets. Additional trenching and channel sampling are still in progress.”

The Cabral geo team believes the latest results “strongly suggest the presence of a wider and much longer mineralized corridor that encompasses the Central deposit and the Pau de Merenda target, than was previously envisaged.”

“The auger results from the Central – Pau de Merenda corridor area are very compelling and strongly suggest the presence of a significantly larger area of gold mineralization than is suggested by the current resource at Central,” confirmed Alan Carter, Cabral President & CEO.

My colleague was right.

Nobody gives a shit about gold.

Which makes it the perfect time to buy gold.

I realise there’s a vapour of nuttiness rising from that last statement, but at least there is hard data to support my belief – which is  a more dignified form of delusion than performing a Bhujangasana before a huckster-with-a-man-bun, thinking he’s your personal wealth advisor.

A positive step for Cabral at Cuiú Cuiú is to convert the Inferred Resources of 19.5MMt @1.2g/t gold (800,000 ounces) to the indicated category.

The inferred resources are worth about $1.3 billion at today’s bullion spot price.

Note: the existence of a large indicated or inferred resource does not mean Cabral can build a profitable mine.

Cabral is currently trading at .25 with a market cap of $7.8 million.