Registered patients – up, kilograms-sold – up, average selling price – up, revenues – up.

Also, teenagers fell in love, cancer was cured, babies were born and Percocet-laced confetti fluttered from the sky.

There was only one tiny problem. 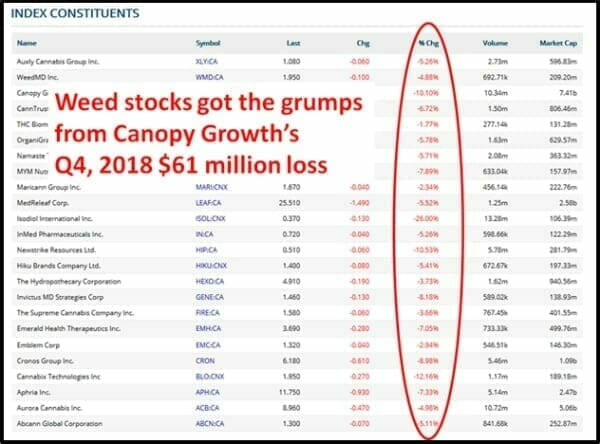 Against this wall of gloom, Crop Infrastructure (CROP.C) gained 6.7%, rising to .24 on 1.6 million shares traded.

The JV has been permitted to develop an extraction and processing facility.

CROP is providing an initial investment of €500,000, to enable the planting of 435,000 square feet, the retrofit of the extraction facility and the construction of an 87,000 square foot greenhouse facility.

Initial yield is expected to be a combined 44,000 pounds of low THC, high CBD cannabis light per year.

“Crop has identified that many countries throughout Europe specifically focusing on the CBD markets are prime new entry points for our growing organization,” stated CROP Infrastructure Director & CEO Michael Yorke.

“Europe is at a turning point,” confirmed Andrea Castiglione, Chairman of the Italian cannabis partner, “We now recognize the medical benefits of cannabis and rather than stand by and continue to see European countries import from across the World we will hire locally and train locally to provide European buyers the means to obtain medicine.”

Castiglione went on to point out that cannabis “has become a replacement for traditional opioids as it pertains to pain management.”

In our opinion, the potential for cannabis to replace opioids is going to be one of the big drivers that melts global resistance to legalised pot.

West Virginia has the highest opioid overdose rate in the US.  Over a period of five years, Big Pharma shipped 780 million doses of opioids to West Virginia, resulting in about 2,000 deaths.

According to the Center for Disease Control and Prevention, the U.S death toll from opioids has increased 300% in the last 10 years.  In 2016, national drug overdose deaths rose to a new high of 52,404 (100 per day) a higher body count than homicides or car crashes. 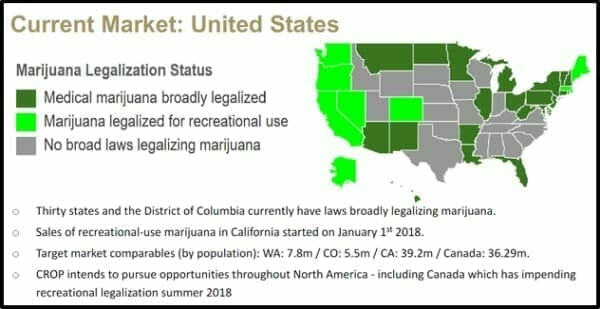 Strong opiates are more tightly controlled in Europe – but they have other problems – like codeine addiction.

A month ago we reiterated that , “Growing weed on real-estate that you own is an interesting value-proposition for CROP shareholders.”

The average value of U.S farmland increased 47% between 2009 and 2017, according to the 2018 U.S. Baseline Outlook compiled by Food and Agricultural Policy Research Institute.

Appreciation on commercial land becomes a store of value.  If weed farmers are making bank – the appreciation accelerates.

From March valuations – CROP is currently 80% off.

Is a gravity-defying global weed company worth a look?

Full Disclosure:  Crop Infrastructure is an Equity Guru marketing client and we own stock.

“Caught in a sector-wide malaise.” LOL!! More like junk stock that is wasting my money and has been plummeting while the rest of the sector has been rising. Way to catch on to the ONE single day that went otherwise. Wow. Great stuff guys. Great stuff.

Jimmy, I am also a CROP shareholder, so I feel your pain. If all your weed investments have been rising you are an excellent stock picker. The Canadian Marijuana Index (the 2nd hyperlink in the article) fell from 1045 on Jan 9, 2018 to 614 today – a loss of about 40%. We anticipate a rebound later in the summer. Thanks for reading.

Bought in at 40 cents, making additions as it falls… but seriously, where is the bottom on this? Incredible amount of short volume on this still

We’re in the same boat. Small volume falls means there should be small volume jumps on the other side, but clearly someone is dumping a lot of paper without much thought as to what it does to the SP. If you believe in the model, this too should pass. Eventually. Some time.