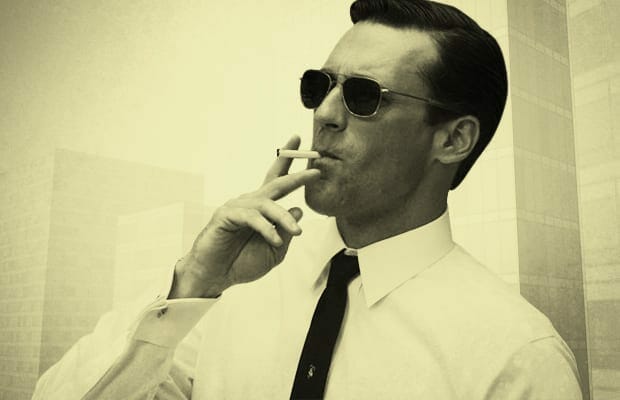 “Lifestyle marketing” is the invention of whatever real-life Don Draper figured out that people couldn’t care less about the many benefits offered by whichever product or service is paying to be advertised to them. Charts and graphs get information to sink in, but so what? Math is for squares. What people really want is the dopamine rush that comes with being able to imagine themselves as the person they deserve to be. Let ’em dream on that for a while, and they’ll buy anything in the real world that might make it come true.

Coffee Break Youtube channel, giving the people what they want.

In part one, we looked at how the people from Namaste were living their dream out loud in some kind of annoying dubstep track that’s only got one gear and never gets around to dropping the bass. The dream being sold there is the financial independence that comes with being in on the ground floor of the Amazon of pot, and who can’t get behind that?

All the finest, most personal dreams can be custom made out of the wealth dream, and that has everything to do with the company’s impressive retail investor following, many of whom are surely market neophytes who identify with CEO Sean Dollinger. This first-of-its-kind direct engagement strategy is effective because the lifestyle being showcased is that of self-styled, maverick third wave internet entrepreneurs. Nobody dreams on a stock market lifestyle, or at least nobody should. The stock market is terrible. This archetype is tolerating a brief encounter with it only for as long as it takes for their entrepreneurial genius to make them very rich through their ownership of the One True Stock.

Couldn’t fake this if you tried

Dial it up at 18:47, and witness Namaste CEO Sean Dollinger complaining about the “spoofing” of offers in the market for N.V.

I like the way he illustrates it using hand puppets.

While there are indeed IIROC rules against “spoofing” orders, Dollinger appears to be describing activity in an open market, and if that’s the case, he’s at very least got his terms wrong. Spoof orders are placed pre-market by traders trying to keep the bid in check. The offers can be called “fake” because they disappear when the market opens, and nobody has a chance to take them out. There is no way to make an offer during an open market that isn’t available to a buyer and, therefore, not “fake” by any definition.

Dollinger’s story has Namaste being manipulated by offers placed during an open market to scare off bids and drive the price down. That’s also dirty pool, of course, but I’m struck by the fact that he doesn’t mention trying to take the “fake” orders out.

Sean (I know he’s a reader), the next time you’re watching a big, scary wall line up on the ask side, consider setting an example by calling your broker instead of IIROC and the exchange. Cleaning out the offers, then going on youtube to put everyone on notice that you’ll do it again would be a baller move. Classic walking the walk. You’d have straight up taken stock from the jealous haters who are just using it as cheap ruse, trying to drag you and your shareholders down, and those sorry losers had it coming! It would come off a lot more confident than whining to and about IIROC and the TSX, but would also cost a lot more, and I don’t really know much about marketing. Maybe people identify better with whiners.

Don’t make me get my spreadsheet…

Let that video roll through 21:46 and Dollinger gets all righteous about it, telling his audience that Namaste “deserves” to be the leading company in the space.

“We deserve to be the leading company in the space. We do $30 million plus in revenue, next year we’ll do over $85 million. I can’t tell you how many companies presently do over $30 million, but I assure you, it’s not over five in the whole entire industry.”

Dollinger has got one thing right: there are exactly five Canadian pot companies with more than $30 million in trailing twelve months revenue. But Namaste is not among them.

Namaste’s gross revenue in the most recent 4 quarters adds up to $17.5 million, which would have earned a top line profit of $3.5 million, and a net loss of $11.8 million.

(Author’s Note: We thought Dollinger might have been referring to the company’s last fiscal year, so we looked it up. He wasn’t, but BOY did that take a while! The original version of this post had an analysis of Namaste’s cashflow here, but various failed attempts at making their accounting add up from quarter to quarter made for enough content to fill a whole other blog post. At this time, we’ve sought comment from the company who may or may not get back to us before we publish The one and only Namaste Tech pt. 3, so stay tuned for that. (update! here it is.) For now, we’ll stick to their revenue, which is reported consistently in their statements, but doesn’t add up the way Dollinger adds it up on 420 Live.)

I thought for a second that Dollinger might have got to $30 million by forward projecting revenue based on his most recent quarter, but they did $5.6 million in Q ending Feb-18, and 4 of those would yield $22.4 million.

While he’s got the IIROC rule book out and is broadcasting to the world, Dollinger might want to see what it says about material misstatements by company executives. But don’t worry, Sean: I ain’t no snitch.

But not for the company’s net.

You’d better believe there’s some stock being printed. Those 20 million shares in Dollinger’s SEDI filings didn’t all come out of the market.

I make no apologies for this strange chart, it’s a product of Namaste’s unique type of accounting.

The chart was drawn to illustrate the rate at which stock is being printed in this company in relation to other admin expenses, and their gross revenue. Stock-based compensation is Namaste’ single largest administrative expense in the middle two quarters of fiscal 2017. Fiscal Q4 (ending in August) is when they quit reporting the line items this way, so 3 quarters of these is all we get. I’m going to reserve comment on the Aug quarter until I can make sense of it.

The nature of companies’ stock options plans are that they are authorised to issue a certain amount of options to directors, officers and employees during the year. When those options are issued and at what price remains the discretion of management. The options are booked in the quarter that they vest, at the fair market value that they vest. Shareholders ought not have a problem with hard working management being paid in stock for growing the company, and professional operators of ventrue-stage companies never miss out on a chance to print themselves some paper.

Maybe this Namaste crew are stock market people after all.

The accounting change threw us a curve ball, but we can still chart the stock-based compensation vs. revenue for all quarters except the year end quarter, and here it is: 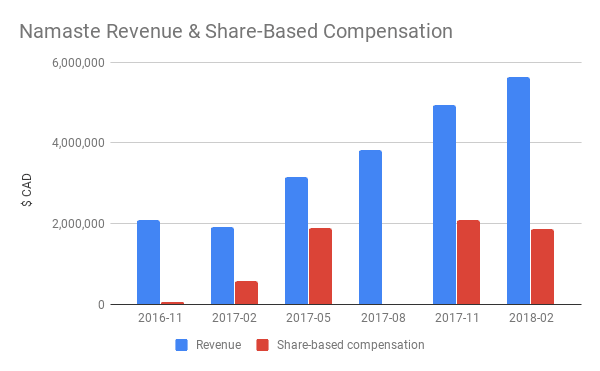 The entitled millennial cliche is a bit on the nose here, but it sure fits. This venture-stage e-retail company whose sales of actual marijuana are still a dream has come by their portion of this out-of-control pot market by securing actual revenue from sales, and showing a gross profit from those quarters. As we look at the revenue against the company’s quarterly share compensation, one has to wonder if Namaste’s management is operating as though they deserve a healthy chunk of equity in any quarter that they can show revenue and top line profit.

It’s an interesting study in modern management psychology. To test our thesis, we’ll first have to get a handle on Namaste’s operating profit. Stay tuned for part 3.

(feature image of Don Draper surely belongs to AMC, but comes via Ross Sarcano over at complex.com, one of those guys who invented love to sell you nylons.)