“Little Canopy” – that’s the two word slugline we came up with to describe Livewell Canada (LVWL.V), which hit the Canadian markets yesterday with a bang and ripped in early trading Friday, rewarding early private placement investors with a $0.95 to o$1.82 profit – so far.

There’s a lot more to it than two words, obviously, but the numbers inherent in this deal are a little bit staggering.

In Quebec, which still has only one sales license, Livewell has a 1m sq. ft. hybrid greenhouse project with the first 100k due to be completed in Q4. They claim they can grow in this facility for less than $0.75 per gram, a claim I frankly don’t believe but will be really interested in seeing if they can hit, because it will be a gamechanger if it happens.

In Ottawa, they’re retrofitting 540k of greenhouses that are already built and operational in the growing of consumer vegetables. They’re adding 144k sq ft to that, with 200k sq ft of hothouse space also available. The completion of this project is due in the next quarter.

The company estimates they can grow in this space for less than $0.90 per gram.

If the actual numbers are double that, it’s still mondo cheap.

While that facility is as yet unlicensed, it’s in the late stage of application, and Canopy is assisting with the application because, let’s be honest, they want to take this joint over one day.

Livewell already has a deal in place with Canopy Growth Corp (WEED.T) to supply 20% of their product to them for the next twenty years, and there’s $20m available to borrow from that outfit if Livewell execs should decide they need it. In the meantime, just for giggles, Canopy has taken a 10.55% stake in the company, which has already paid dividends by virtue of their great opening.

So either Livewell will have an eager customer/investor/partner in the world’s largest public cannabis company for the next few decades, or Canopy will come take them out. Period. Either option is pretty solid business.

Part of that 1m sq ft won’t be growing cannabis proper, but will be devoted to hemp, which will supply Livewell’s subsidiary, O-Hemp, a company that sells hemp seeds and hemp snack bars.

In fact, if you go to their website, they barely mention growing cannabis. The opening page says the following:

DEVELOPING A NEW APPROACH TO HEALTH AND WELL-BEING, BY CONDUCTING ADVANCED RESEARCH ON CANNABINOIDS and designing medical and consumer health products.

And this is where I really get interested, because although the market grants a premium value to square footage of grow space, smart investors are starting to turn their attention to down-line products, where that $1 per gram cost weed is turned into $25 per gram food, health, beverage, and assorted consumer products.

The Green Organic Dutchman’s (TGOD.T) early success has been built around their focus on this business, CannaRoyalty’s (CRZ.C) sector-defying stock price rise has been based around their collecting of consumer and tech products and IP, and even growers, like Aurora Cannabis (ACB.T) are making acquisitions as quickly as they can to ensure they have value add products to play with.

Here’s why. I’ve spent personally around $350 this month on CBD products for friends and family, and that’s just on hemp-based low- or no-THC products that are legal in Canada presently.

Again, that’s just this month. I’ve spent that on myself, my 92-year-old grandmother who has acute pain, my cat, I got my neighbour into it, and my kid has ADHD so I’m primed for what can be done for him when the regulatory system catches up and Big Pharma gets involved.

When CBD is able to be properly delivered in more ways, and on supermarket and drug store shelves, you’re all going to be in that boat. We will all be buying those products, and the smoker market will look like couch pennies.

Livewell gets this, and while they’re happy to grow inexpensive product and re-sell it if there’s money in doing so, they really only expect that to be a growth area for the next few years. Their focus, rightly, is on what products they can develop so that their grows have just one customer – themselves.

To that end, they’re looking to extract up a storm. 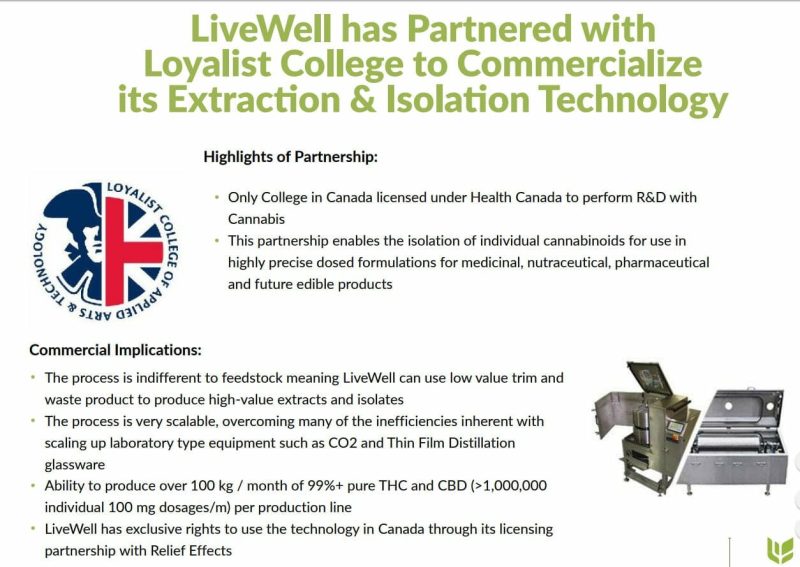 Now you begin to see why growing a boatload of hemp makes sense.

These guys don’t need to grow cannabis to make cannabis products. They can extract what they need from cheaper, larger, less fussy commercial hemp.

Previously, Livewell had a $54-million financing from Chuck Rifici’s Cannabis Wheaton, which is now called Auxly Cannabis (XLY.V). Wisely, it appears the company opted against losing 1/3 of their product forever in return for cheap financing. Whether Rifici’s exes at Canopy had anything to do with that change of heart remains unclear, but if you’re going to be fought over, be fought over by two of the titans of the entire industry, you know?

This company, in my opinion, is super cheap. You can find plenty of reasons to be cynical about it -late stage applications and cost to develop the square footage and late to the game and more financings will be needed – that’s all fine.

You don’t want to invest? Don’t.

But if you believe, as I do, that Quebec NEEDS more licenses, and that a group this size with this much in assets, with a partner like Canopy, will be front of the line to get theirs, and that the Quebec government will put local suppliers (of which right now there’s only Hydropothecary) at the head of their vendor purchase list…

Well, you almost have to at that point.