From TomaGold’s sprawling portfolio of assets (six gold properties in northern Quebec and a couple more in Ontario) we believe the Monster Lake project JV’d with IAMGOLD (IAG.NYSE) contains the most powerful stock price catalyst.

The project is located 50 kilometres southwest of Chibougamau, Quebec, Canada. IAMGOLD is reporting the final assay results from all 26 drill holes, totaling 8,282 metres, completed as part of the initial 2018 program.

The results are – what would the kids say?  Sick? 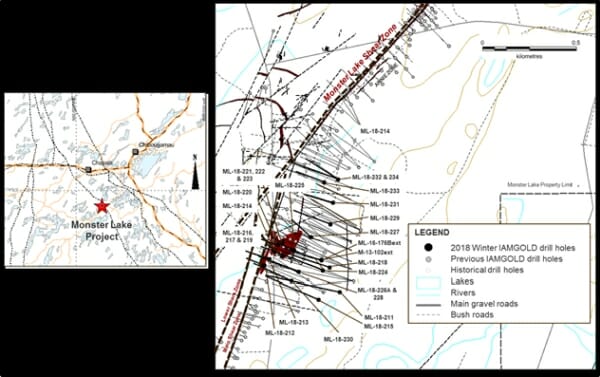 The 2018 winter drilling program was designed “to improve confidence” in the continuity of the mineralization.

If not, you may have an endemic confidence problem.

IAMGOLD is not your typical JV partner for a company like TomaGold, trading at .06.

IAMGOLD is a $2.4 billion gold miner with large stakes in the Rosebel gold mine (South America); Essakane gold mine (Burkina Faso), Westwood gold mine (Canada) and the Sadiola Gold Mine (Mali).

IAMGOLD generates over $1 billion a year in revenue and has an “operating margin” of 53%.

Operating margins measure the financial horse-power of the core business – stripping out factors like asset sales or interest payments. 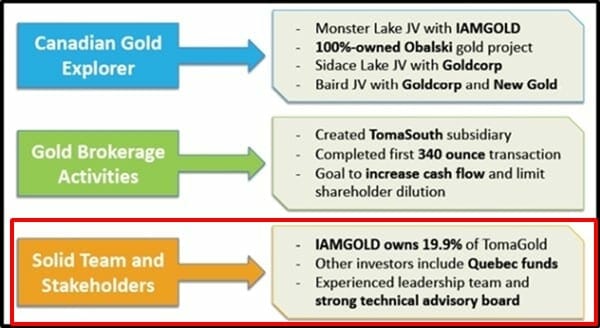 “We continue to be impressed with both the continuity and the high grades demonstrated by infill drilling of the 325-Megane Zone,” Stated Craig MacDougall, Senior VP, Exploration for IAMGOLD, “We believe the structural setting suggests favourable potential for the occurrence of additional mineralized shoots along the Monster Lake structural corridor and we continue to evaluate this setting for additional zones of mineralization.”

The latest results will be folded into “the deposit model” – used to update the mineral resources – and inform the strategy of the next drilling programs.

A further round of drilling is being planned to test specific structural targets which are accessible in the summer season.

If you think the TomaGold boat has left without you, it hasn’t.  It may be drifting away from the dock, but you can still jump the gap and go for a cruise.

i.e.  You can buy TomaGold now for less than IAMGOLD paid.

According to the terms of the JV agreement, IAMGOLD must incur $10 million in exploration work over 7 years to earn an additional 25% interest.

Full Disclosure:  We have no commercial relationship with TomaGold, but we do own stock.