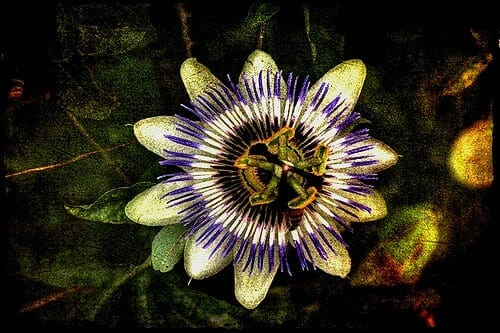 Two new pot deals launched on a down day, so we’re having a look at what’s working and what isn’t in this extended trip.

The pot stocks slowed down for a rest today, but last week’s melt-up taught us a lot. For starters, this isn’t over. This market has both appetite and attention for weed cos. Furthermore, it’s sensitive to perception.

Chris Parry’s impassioned post-IPO assault on the directors of Med Men (MMEN.C) sent it stumbling hard out of the blocks. It didn’t turn around until the company announced on Friday that they would be revising the executive compensation package that Parry made hay from in these pages. In the two trading days following that release, MMEN is up $1.06 to $4.68 (+22.6%), and the $5.25 at which the company envisioned their Coremark-led post-IPO raise is looking a bit more plausible.

Aphria (APH.T)’s $225 million bought deal raise Thursday reset their market to the price of their below-market raise. From there, Canada’s quietest operator continued along with its implicit agreement with the market that they ought to leave each other alone. APH has earned a perception that it is a consistent, methodical producer and the market is treating it that way.

By contrast, the market made a re-assessment of Newstrike (HIP.V) two weeks ago when they did a $45 million below-market raise, and had to squint its eyes to see HIP’s finish line way off in the distance. The company reports 7,000 square feet of active production space, but has yet to produce any dope that has sold. Their 167,000 square foot buildout is supposed to be done by the end of the year. HIP fell below the $0.75 financing price immediately after being un-halted and hasn’t been able to gain the ground back convincingly. HIP closed at $0.69, down 3 cents (-4.14%) on 1.47m shares today.

“Deserve’s got nothing to do with it,”

While we maintain the opinion that these valuations are larger than they deserve to be, we aren’t out of touch with the fact that it hardly matters. To commiserate about how it ought to be would be to miss a clear value affirming signal: This market is ascribing a premium to de-risked cultivation assets, and we think we can see why.

The three largest market caps belong to the companies with the most active cultivation space (WEED.T, ACB.T & APH.T), and the companies that can deliver a believable de-risking narrative to the market are the ones in the best shape. Organigram’s (OGI.V) three month march up the stairs from $3.62 to $5.75 came as Health Canada approved their expanded facility. Before that, they primed the story by keeping their construction updates front and centre on their investors page. The supply contracts played too, but there’s no sense over-complicating it. The bump was set up by repeating the mantra of: “We’re building the space. It’s coming along nicely,” over and over and over, then delivering the space.

This market will have to be supplied somehow

Friday, EG finally got around to quantifying the potential upside of Canada’s coming retail market, and the results surprised this cynical statistician. The pot bill’s royal ascent will give these companies a crack at supplying 83% more product than they already do, to displace the black market. That product is going to have to come from somewhere, so let’s have a look at the growth currently available in… well… in growth. 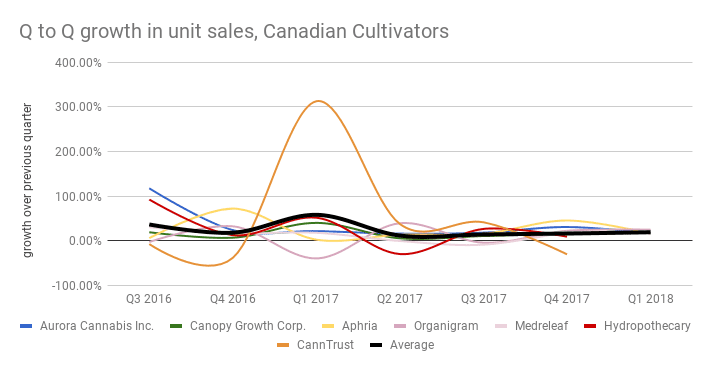 CannTrust’s erratic action is making this meaningless and unuseable, so let’s take them out.

Handily, the sector average is steadying out at 18% quarter over quarter unit sales growth. If the unregulated market had to be replaced tomorrow, all at once, the cultivator class would need some help.

To add to the crowd of half-built cultivators and growers who either haven’t been producing for 12 months or haven’t published their units, today we were given two freshly minted deals who are hard at work cultivating the perception that they’re going to be able to cultivate.

48 North Canabis Corp. came in hot today with an RTO of a TSX.V vehicle. Backed by Cirque Du Soleil founder Guy Laliberte, the newly minted NRTH.V is the owner of a 40,000 square foot licensed facility in Kirkland Lake, ON. The company has not yet received a sales license from Health Canada, and it’s not known how far along they are in the inspection process.

Their deck plays up a branding strategy focused at women, but it’s unclear how the product NRTH intends to produce will be more beneficial to or coveted by women than any other cannabis product. 48 North had $14 m in the bank at RTO time, courtesy of a $16m debenture raise. The units are convertible to shares of equity at the debenture holder’s option at $0.90. NRTH traded 2.62 million shares in their debut to close at $0.91. We calculate the company’s market cap at $70 million.

The other RTO today was from “The James E Wagner Cultivation Company,” which sounds like an old-timey orchid company, but is actually a Canadian LP.

Wagner appears to be a family operation out of Kitchener, Ontario. The company hasn’t yet filed their financial statements or MD&A, but we can glean from their website that they’re running a 15,000 square foot facility in Kitchener, and retrofitting another 345,000 square feet on top of it.

This company does have a Health Canada sales license, but it’s unclear how much cash they have or how many shares are outstanding. They did an 18 million dollar raise in April at $1.18.

The Wagner website touts a partnership with Canopy, and the use of “aeroponics” to grow cannabis, along with the usual buzzword salad that one gets with new ventures who either want to seem modern in an un-original way, or are actually innovative thought leaders disrupting paradigms.

JWCA.V traded 1 million shares today at $1.15. As we mentioned, their total shares outstanding, cash balance, debt level, and anything else one might find in a company’s financial statements are unknown.

How to play it

The value in this market is in the companies who have lit space that the market isn’t pricing in, or whose space is not yet lit, but is about to be. Assuming such a company can properly articulate their story, the value of that space should work its way into the company’s chart in short order, because there is no shortage of investors paying attention.

Left on the cutting room floor today are some interesting developments in the cobalt space, and our long threatened look at Namaste (N.V), which we hope to get to tomorrow.