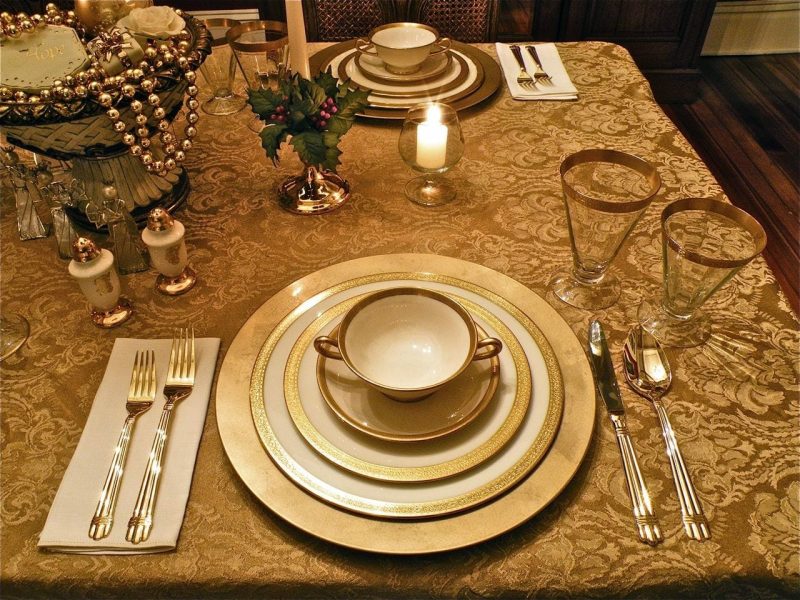 Cabral Gold (CBR.V) is laying the foundation for what could become an economic gold deposit, or series of gold deposits. In order to begin laying down the foundation of said project, they were forced to tear down some existing walls.

First, a brief summary of what Cabral has … 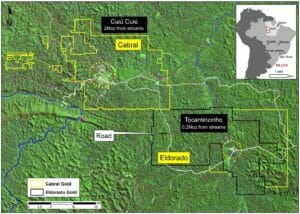 This corner of Amazonia was once the stage for THE largest gold rush on the planet between the mid-1970’s and the mid-1990’s.

During the early 1980s, tens of thousands of prospectors flocked to the Serra Pelada site, which at its peak was said to be not only the largest open-air gold mine in the world, but also the most violent.

The district is estimated to have produced somewhere in the neighborhood of between 20 and 30 million ounces of gold. That’s roughly seventy-one of the piles of shiny stuff pic’d below. 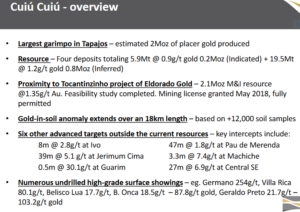 In a highly anticipated news event for CBR faithful, Cabral released a piece of news in the early hours of June 7th updating a resource estimate for four gold deposits (outlined below in red) at Cuiú Cuiú. 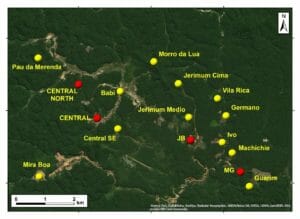 It might be more accurate to say that the company released a NEW resource estimate, rather than an update of a previous model.

The reaction from an oftentimes annoyingly obtuse market was typical. Rather than diving into important details contained within the release, the market went a big rubbery one instead, weak hands surrendering their shares at wholesale prices.

The market was obviously expecting a big shiny headline number. Cabral management had other priorities – they’re not in the show and tell business.

Regarding this recent news, Alan Carter, President and CEO stated…

The 2018 resource estimate is an important fundamental step towards developing an economic platform for the Cuiú Cuiú project.

“An economic platform…”, we’ll get back to that in a bit.

Reality – not all ounces are treated (calculated) the same:

When a company releases a resource estimate of, say, one million ounces of gold in the ‘inferred’ category, it would be a mistake to assume said company is sitting on one million ounces that can be mined economically. Mineralization is categorised according to the confidence that a qualified person has in its eventual ‘mineability’. The concept is a simple one once it’s been properly explained.

… in the most basic terms, is the quantity, grade, geological characteristics, and uniformity of an orebody.

There are three categories in the making of a gold resource estimate which need to comply with standards set by The Canadian Institute of Mining, Metallurgy and Petroleum, and enforced by the Canadian Securities Association under National Instrument 43-101.

This NI 43-101 pact was created after the Bre-X scandal in order to protect investors from unsubstantiated resource estimates created by overzealous duplicitous self-serving rat-bastard-shit-fuck promotional types who might otherwise attempt to pull the wool over everyone’s eyes.

The three categories of a resource estimate: inferred, indicated, and measured.

An inferred mineral resource is one where the quantity and grade of an orebody is based on only a limited amount of sampling and drilling data. Drill hole spacings – the distance between core samples produced with a drill rig – are wide, leaving open the potential for multiple barren or weakly mineralized gaps which remain undrilled. Reasonable assumption and limited verification are the hallmarks of an inferred gold resource. But not all inferred resource estimates are created equally (stay tuned for more on that).

An indicated gold resource is one where the distance between drill hole samples has been tightened up. Quantity, grade, continuity, structure, etc can be gauged with more confidence. Further development of the orebody, including infill drilling and the initiation of economic studies, may be warranted.

Measured: The confidence that comes with measurement

It all comes down to a tight drill hole matrix. A measured gold resource is accomplished through even tighter drill hole spacings. Quantity, grade, continuity, structure, physical characteristics, etc can be viewed through a much sharper lens. Establishing a measured gold resource is essential in determining the ultimate economic viability of a deposit. Assuming everything falls within strict economic parameters, a production decision can then be made with total confidence.

As we mentioned: ‘not all inferred resource estimates are created equally‘.

I know what some of you might be thinking, ‘the new resource estimate includes more holes and nearly 60% more meterage, and yet the number of inferred ounces shrunk… WTF ?!”

What I glean from the above numbers is that the company began the process with a stricter set of standards. This, in order to produce a more accurate, higher quality result. They likely started from scratch, scrapping the old 2011 numbers, applying a more rigorous protocol for calculating gold ounces.

Confidence is the underlying theme here.

As I noted above, this management team at Cabral is not in the show and tell business. If there were inconsistencies in the 2011 resource estimate, management set out to resolve them.

There were obviously a number of gaps which weakened the old resource estmates validity. The old report was calculated without deploying ‘top cuts’, that is… it was produced without capping the grade on some of the higher-grade intervals to produce a more realistic, smoothed-out grade-distribution estimation of the mineralized zones.

Let’s scrap the conservative tack for a moment and view the new 2018 Micron resource estimate through a lens where NO ‘top cuts’ were factored into the equation, comparing it to the old 2011 Pincock resource lying of the editing room floor… 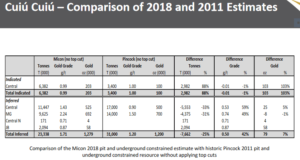 What we see is more gold, at a higher grade, and significantly fewer tonnes of material. That’s interesting. Even though the above chart removes an important conservative filter (top cuts), it demonstrates how much better current managements understanding is of how the mineralized zones hold together.

Aside from employing ‘top cuts’, this new resource is also ‘pit-constrained’, meaning, for the purpose of producing this new report, the mineralized rock needed to fall within very specific underground parameters – that of a conceptual open pit shell (this analysis was largely based on recent economic studies at Eldorado’s Tocantinzinho deposit next door). This exercise very likely knocked out a number of the ounces that were tabled in the historic 2011 estimate.

(the above image of a conceptual constrained pit shell does not specifically relate to Cabral’s Cuiu Cuiu deposts – it’s for illustration purposes only. It’s a relevant depiction, however, of how and why ounces can suddenly drop out of a resource estimate – note how portions of the above orebody fall outside the pit shell design outlined in red)

This new NI 43-101 resource estimate, prepared for Cabral by Thomas C. Stubens P.Eng. of Micon, via the application of top cuts and a pit constrained model, was a conservative report.

Repeating a quote from the top of this piece, commenting on the new numbers, Alan Carter, President and CEO stated…

The 2018 resource estimate is an important fundamental step towards developing an economic platform for the Cuiú Cuiú project.

And that’s the bottom line. The objective here is establishing an economic platform for the Cuiu Cuiu deposit, not trotting out a bunch of fat numbers before an all-too-gullible resource audience for the sake of eliciting applause.

Cabral, and its loyal shareholders, now have a solid foundation on which to build a solid and substantial gold resource, one with district scale potential.

We believe that surface trenching and further drilling will provide additional data that will likely statistically improve top-end cuts, and as a result add significant additional ounces within the existing deposits as well as along strike.

It is worth remembering that previous drilling has identified ten mineralized zones at Cuiú Cuiú, for which only four thus far have sufficient drilling to determine resources, and significant upside exists in all four of the deposits identified to date. Furthermore, the recent recognition of new high-grade targets at Cuiú Cuiú [see news release of March 21, 2018] also represents a very important step towards improving the overall grade and viability of the project through the potential addition of higher grade resources. These efforts will be prioritized, and tested over the coming months

CEO Carter knows his away around the prolific Tapajos district in northern Brazil. During an interview with my friend Peter Bell back in late May, Carter reminded us…

I was looking at this map of the Tapajós the other day, Peter. And there’s seven gold deposits in this area with resources. How many have we been involved in? 4 of the 7 – Coringa, Palito, Cuiú Cuiú, and Tocantinzinho. We’ve been involved in 4 of the 7, all of which are discovery or production stories.

CEO Carter appears to have the Tapajos district dialed. And with that mindset, with company coffers stoked-up to the tune of some $3M, and with a resolve to sleuth their way to the hard rock source of some 2 million ounces of placer gold produced in the area, Carter and his team will be hitting Cuiu Cuiu hard this summer and fall.

The company’s 2018 campaign of trenching, mapping, auger sampling, soil sampling, and rock sampling will crescendo into a substantial drilling campaign scheduled for the latter half of the year.

A Peek Under the Hood:

Demonstrating his confidence in the outcome of an agresssive 2018 exploration campain on the project, CEO Carter stated in a recent Peter Bell interview…

I’d like to see another resource estimate out in a year.

Random thought: Road access into the Cuiu Cuiu area has apparently improved quite dramatically over the past few years. With the ability to move heavy machinery in and out with relative ease, and with the amount of surface sampling the company has performed in recent months – surface exploration that has given management a better understanding of the underling geological controls at Cuiu Cuiu – I wonder if they’ll consider mobilizing a drill rig to the project sooner rather than later. It might make sense as I’m sure CEO Carter and co have already outlined a number of high priority drill targets.

Full disclosure: Cabral Gold is an Equity.Guru marketing client. The author does not hold shares in Cabral Gold. Yet.

Feature image courtesy of My Place to Yours.