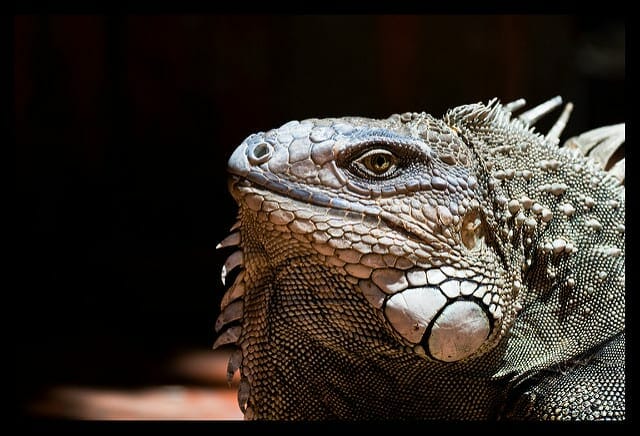 Canopy and Organigram continue to lead the pot resurgence, and the oil market continues to slide while Aphria gets the big number.

Canopy Growth Corp. (WEED.T) announced today that they’ll be funding a UBC cannabis science professorship to help address the opioid epidemic. It’s a well-spend $2.5 million that sends a clear message that the market for the plant they grow forests of could still be expanding, while further moving WEED into the class of corporate citizens who does that sort of thing. Contributions like this are best received when they’re on-brand like this one. Goldcorp sponsoring the Vancouver Aquarium, for example, just doesn’t sit well. It’s as if they’re trying to make up for something.

WEED led the TSX in volume by value on a day when it traded just under its average volume, while Organigram led the Venture with 4 million shares, 4x their average volume on a day that was all pot stocks. 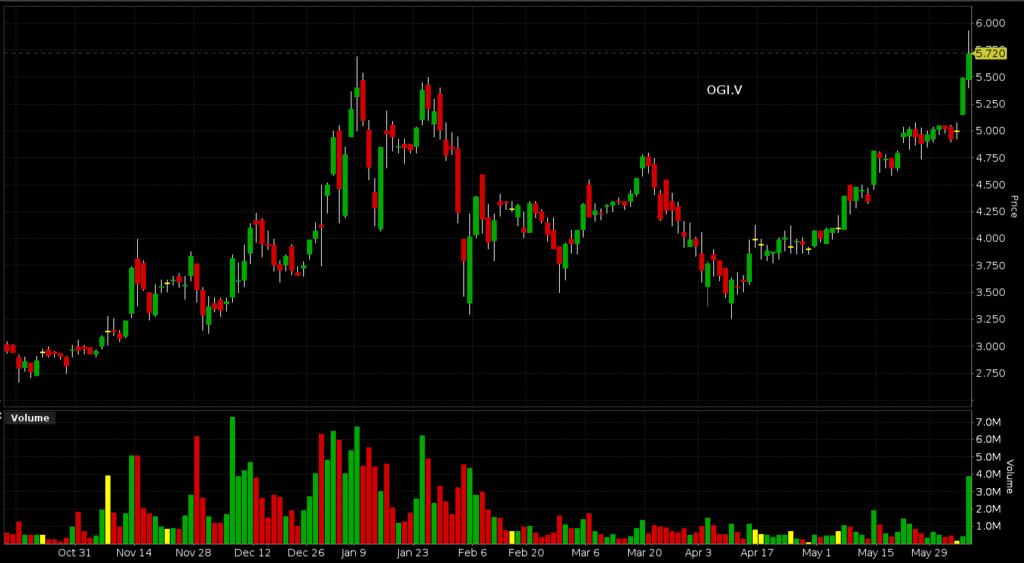 The oil market is moody and delicate. It has a lot going on. Just leave it a lone for a while

The slow day out there had to do with oil companies laying low as the price slide continued in Brent and WTI. Oilprice dot com’s Irina Slav tells us that US stockpiles are up, and that the slide might be worse if not for the ongoing (worsening) crisis in Venezuela and the projected slowing of production out of Iran. The Globe has European refineries planning to cease their purchase of Iranian heavy at the end of current contracts, unwilling to run against the grain of American sanctions.

Canadian producers Suncor (SU), Canadian National Resources (CNQ.T) and Imperial Oil (IMO.T) all traded low volume and kept their heads down. Oilsands producers have a lower break even point than producers of conventional crude, so holders may get nervous if oil breaks trend.

Aphria Cannabis halted the the stock today to announced a $225 million bought deal financing. Assuming the over-allotment closes and Aphria resets to the $11.85 financing price tomorrow, it puts Aphria at an enterprise value close to $2.6B. That’s still $5B less than Aurora+Medreleaf, and $5.5B less than $8B Canopy Growth. Number three with a bullet.

This gives us an opportunity to see if we can find a pattern to the way the market is valuing these large Canadian producers. 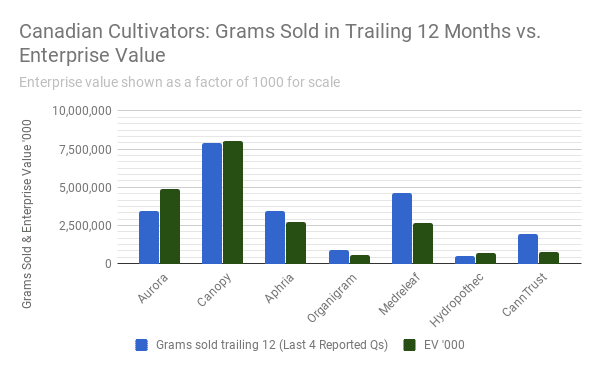 In analysis, there is a tendency to over-think it. For all of the speculation about projected capacity of square footage, about supply contracts and foreign licenses, unit sales continue to be the metric that correlates best to what the market is giving these cultivators. That makes a lot of sense. A  company who can move weight is confirmed to be successfully set up to grow that weight. They’re further along in the de-risking process. 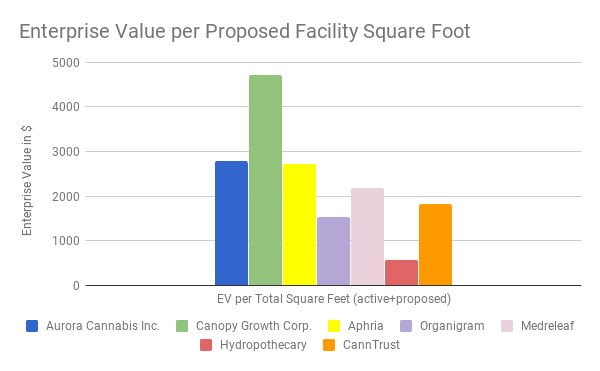 Similarly, the companies moving the most grams are getting the best multiples on the facility space that they’re planning to build, thanks to a track record of having built and operated successful facilities. That’s why we’re often obsessed with outsourcing. If the sold grams aren’t all grown grams, it throws off the natural order, giving companies credit for marketable grams that they did not grow.

Producing units has never been a problem for Aphria. Live chart, updates each quarter.

We’ve long considered Aphria to be in the top of its class. When we asked if any of their product was outsourced, APH made it clear in no uncertain terms that they grow every gram they sell and seemed sort of offended that we even asked.

Their reporting is un-matched in terms of both detail and accessibility. They’re meticulous, obsessed with detail. Most companies publish a one-line estimate of the fair value of their biological assets to satisfy an IFRS reporting standard that takes a bit of getting used to for analysts looking at pot companies. Aphria has the estimate of the fair value of their live plants broken down by the net present value of the projected yeild of each individual part of the plant (stems, trim, shake, etc.).

The attention to detail doesn’t slow them down. Aurora’s Cam Battley told the EG twitch stream Monday that Aurora would have liked to have had a crack at Broken Coast if Aphria wouldn’t have arrived first. Between that and the Nuuvera deal, Aphria behaves like a company who knows what they want.

Aphria is the one of only 2 companies in the cultivator class that are cash positive, having earned $0.21/share TTM (Canntrust is the other. $0.20/share). For a company making aggressive growth moves in an aggressive growth market, profitability almost seems like an accident.

Usually, we consider a big raise at a market top to be a safe bet. Get while the getting’s good. And there’s a bit of that going on. If someone wants to give you money, you take it.

Aphria has run a drum tight, profitable operation, taken care of the equity and grown through careful, intelligent acquisitions, and all it’s gotten them is less equity growth than their peers. But the people over in Leamington aren’t the type to let the market rattle them. They’ve just completed the largest financing in the young history of legal marijuana. We make their cash balance around $350 million dollars, about the same as Aurora’s (without Medreleaf), and we’re eager to see what they have planned.

Because they certainly have a plan.