On June 4, 2018 First Cobalt (FCC.V) announced that the acquisition of US Cobalt is now completed.  US Cobalt shareholders will receive 1.5 common shares of FCC for each US Cobalt share.

An hour ago, one of our in-house mining experts DM’d me on the Equity Guru Slack channel:

“US Cobalt is a good get for FCC. Possibly even better than Ontario based assets IMO.”

This transaction has been approved by the U.S.’s Committee on Foreign Investments.

US Cobalt’s Iron Creek Project in Idaho, has a historic mineral resource estimate of 1.3 million tons grading 0.59% cobalt. The district has an even higher historical grade of .74% cobalt.

The word “historical” indicates that the data was collected before modern (NI 43-101) geological reporting rules were instituted.

Micon Industry Consultants helps exploration companies establish 43-101 compliant resources. Micron says that historic assay data “typically involves a project which has been around for quite a while and has been drilled multiple times by different operators.”

Some of the phases of drilling often go back decades. The client usually has the drill logs and assay results. Rarely will they have assay certificates which will describe details of the assaying methods.  If the data is more than a couple of decades old, there may not have been any independent data verification performed by the operator at all.

As Micon explains, the project will typically have to be re-drilled.

Possessing bullish historical data is like holding a photo of a beautiful blind date.

It’s hard to take your eyes off it.

You want it to be true.

But the possibility of disappointment is palpable. 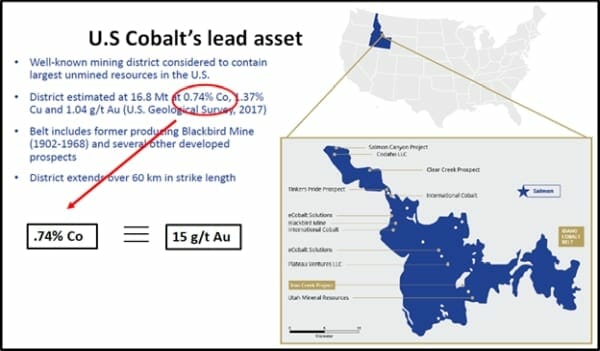 The big auto-makers are scrambling for new supply lines.  For instance, Volkswagen (VLKAY.OTCPK) tried to secure a cobalt contract for 30,000 tonnes per year, but failed to do so.

On May 24, 2017, we pointed out that First Cobalt’s Keeley-Frontier Mine in Ontario had “the best cobalt-to-silver ratio of all major producers in both Cobalt and Silver Centre mining camps, producing 1 lb of cobalt for every 5.8 ounces of silver. 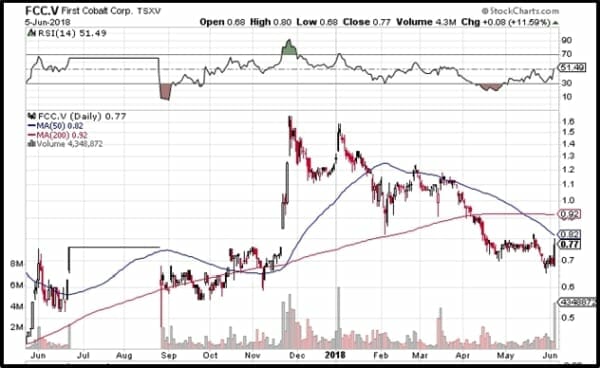 On June 5, 2018 Trent Mell, the CEO of First Cobalt, published an open letter to FCC shareholders.

“The global fleet of electric vehicles grew 54% in 2017,” stated Mell, “However this only represents a little over 1% of global vehicle sales. The EV revolution is still in its infancy, yet cobalt production is in a deficit position and is projected to remain there for several years.”

Mell addressed rumours that cobalt could soon be eliminated from EVs. While agreeing that the trend is towards LCCPV (Lower Cobalt Content Per Vehicle), this will be offset by the massive increase in EV sales.

Benchmark Mineral Intelligence forecasts that cobalt density in EVs will decrease by 60% from 2017-2026 and yet total cobalt EV demand will increase more than 300% as more people opt for electric vehicles.

And yet – sugar is still a thing.

“Over the past year, four cobalt companies have come together under the First Cobalt banner to create a vertically integrated, North American pure play cobalt company with assets in two of the best jurisdictions in the world – Idaho and Ontario,” stated Mell. 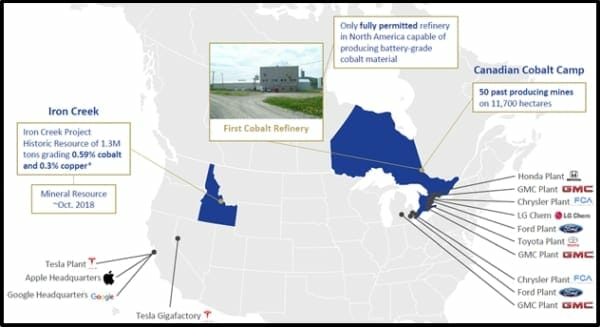 Iron Creek Project (Idaho, USA) – A new resource estimate is underway. An ambitious drill program aimed at doubling the strike length of the known cobalt mineralization to 900 metres by the end of 2018.  Identified mineralization is contained within the patented property, which is advantageous for permitting.

First Cobalt Refinery (Ontario, Canada) –Most cobalt in North America is found with high arsenic, which the FCC refinery is designed to treat.  Initiated a study for a restart and expansion of the facility, which has been in maintenance for three years. The refinery has the potential to treat feed material from First Cobalt’s own projects and 3rd party concentrates and recycled material – creating a North American supply of cobalt sulfate for the electric vehicle market.

Cobalt Camp (Ontario, Canada) – First Cobalt controls almost half of the historic Canadian Cobalt Camp, with more than 50 past producing mines over 100 km2. A mineralized zone has been identified near Kerr Lake that now extends for over 350m. The goal is to assess near-surface mineralization that could be amenable to open pit mining.

On June 5, 2018 uber-smart Oil & Gas pundit Keith Schaefer (wandering beyond his normal boundaries) stated that, “Cobalt is at near record prices—and The Big Catalyst for cobalt stocks hasn’t even happened yet.

“When the institutional money flow starts, it will be a lot more concentrated than it was in lithium,” stated Schaefer.

“I see First Cobalt as one of the first juniors to attract big institutional money flow.  The recent merger with US Cobalt gives the combined company a high-grade, low-capex deposit right in the United States (Idaho), and a fully permitted mill and refinery in Ontario.”

What’s important for both the buy-side institutions and the supply chain is having a primary cobalt supplier. They are as rare as hen’s teeth; almost every deposit in the world is tightly tied up with copper or nickel.

The value in FCC’s Iron Creek deposit in Idaho is over 90% cobalt, so physical supply is not at the whim of another metal’s economics.  EV manufacturers will want absolute security of supply to buy into a project or company.”

After the closure of US Cobalt sale, the CEO’s message to shareholders, and Schaefer’s endorsement, FCC surged 11% to .77 on 2.3 million shares traded.

Do we think this is a good time to purchase FCC stock?

The medium-length answer is, “Fuck yes.”

Full Disclosure:  FCC is an Equity Guru marketing client, and we own stock.