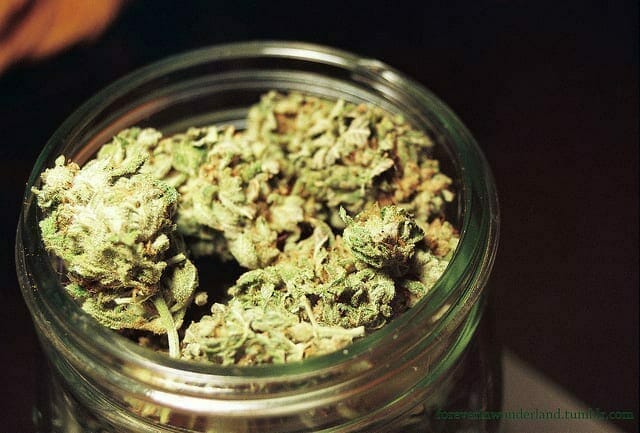 The Pilbara bounce: the only gold area play working shakes off the irrational exuberance and settles into regular delusion. OGI OGI OGI! OY! OY! OY! Is Organigram low-key undervalued? Want to be a high binding investment banker? It’s easier than you think.

The Pilbara trade is still cleaning itself up after the cork popped yesterday. Part owner of the bulk sample that got the volume going, Novo Resources (NVO.V) was up 12% to $4.80 (+$0.52) on a very average 500k shares, as the cold light of dawn showed the market that 10 grams a tonne is actually a pretty good gold grade out of a bulk sample.

EG client co Pacton Gold (PAC.V), who was caught up in the draft the whole way (including the whole way down), lost $0.03 to close at $0.43 (-6.5%) as the same market realized that for all the land they’ve got in a great area for gold exploration… they’re not yet doing any gold exploration. PAC is a serious outfit that just cashed up, so we expect they’ll soon do just that. 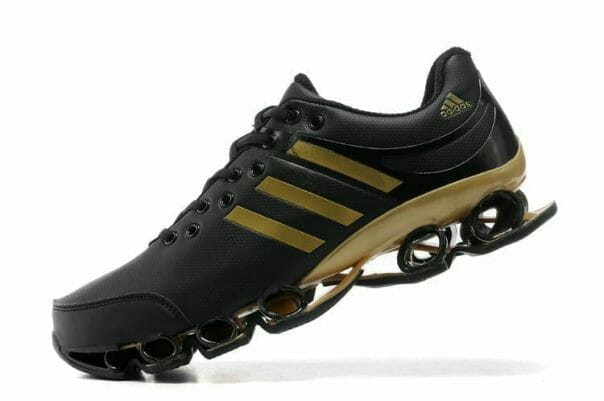 Adidas Golden Bounce trainers were really popular for a minute, then not at all, could always come back.

On Fridays we usually find a venture resource stock that’s doing good volume with little or no news or no good reason, on the thesis that abnormal volume while everyone with any good sense has mentally or physically checked out for the weekend is a good sign that something is up.

Friday June first is too slow to make it even worth picking an outlier. Only three companies even traded more than $1M in dollar volume, two of them were PAC.V and NVO.V, and we’ve all had enough of that.

The other one of the three was New Brunswick cultivator Organigram (OGI.V), which we consider to be undervalued in its sector. We rang the company up last week to clarify whether they quit re-selling bud or just quit reporting it, and ended up on the phone with CEO Greg Engel. Engel was proud to say that, no, they haven’t outsourced in six months, and hope not to have to in the future. He was a good sport when we cracked wise about OGI’s phase 3 rooms being “substantially complete” (“as a matter of substance, how complete are they, Greg?”), and was able to sort out some lingering questions we had about these provincial purchase agreements. 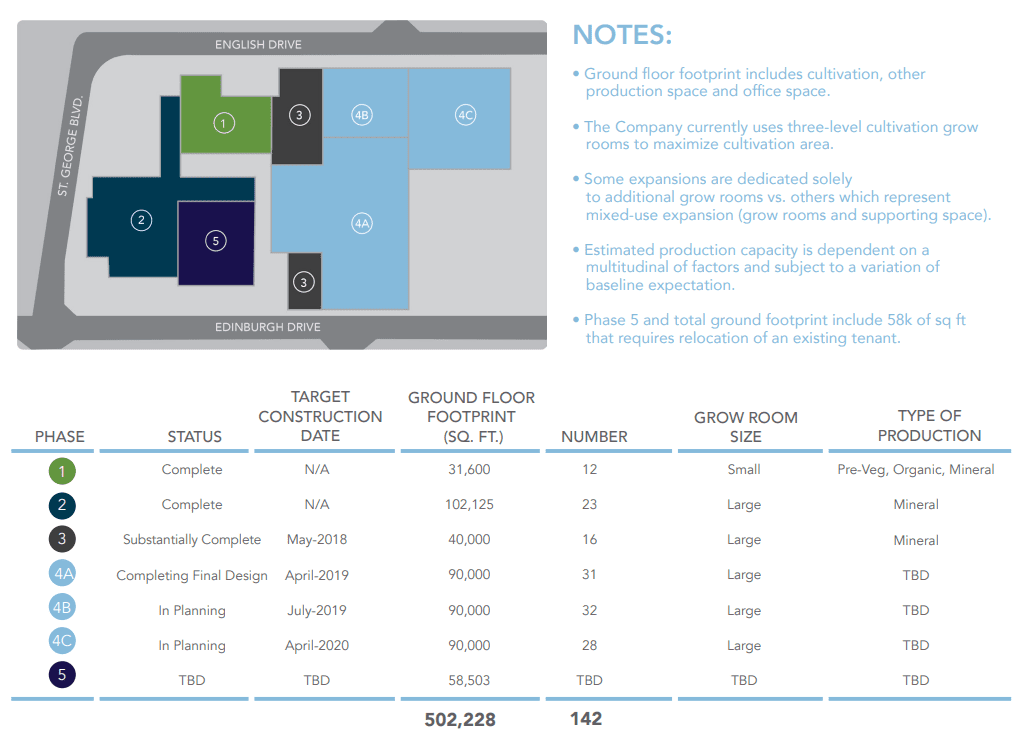 The 3rd phase of OGI’s buildout is substantially complete.

OGI’s agreement in principle with the New Brunswick provincial authority isn’t settled in terms of price, but does guarantee that the provincial government will buy 5,000 kg of product off of OGI, per year, and that they will buy it a discount to the retail market. OGI has an identical deal with the PEI provincial authority. That’s 10,000 kg. 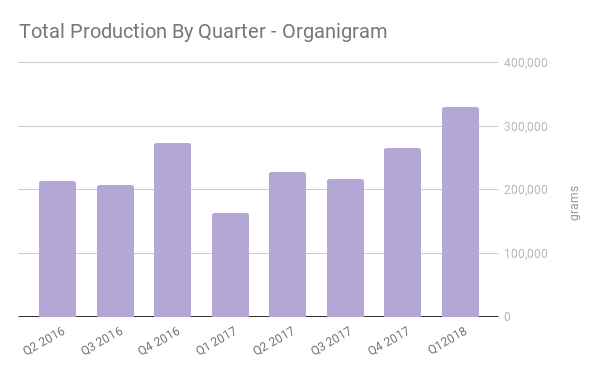 OGI produced 330 kg last quarter, and 873.4 kg over the trailing 12 months, so they’ve got a long way to go, but are heading in the right direction.

When executives are asked hard questions, they respond in one of 2 basic ways: either with total conviction, or by deferring to someone else.

For example, when we asked the guy from Maricann why their production numbers didn’t add up from quarter to quarter, he immediately referred us to a guy at a phone number that doesn’t work. Stay tuned for more on that.

Greg Engel is of the total conviction archetype. When asked if OGI can produce 10,000 keys of high quality product between the facility they’ve got, the one that’s substantially complete, and the one that’s not yet started, he didn’t even flinch. Absolutely they could. And enough to export to Australia while they’re at it. Some total conviction executive archetypes get that way by never looking too deeply into the facts behind what they’re explaining, but there’s rarely a way to check up on it. 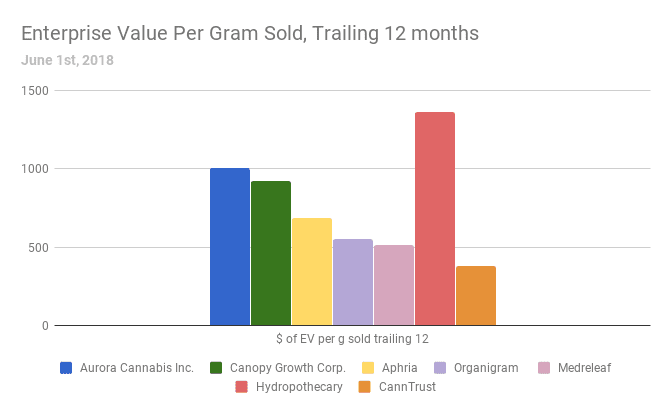 This chart represents the relative enterprise value of Canada’s cultivator class. There are some even higher valuations among companies who have never grown or sold a gram, and we’ll look into that a bit more on Monday.

Not actually. The hard part is being able to convince rich, stupid clients that they can blame you if it all goes wrong, even though they can’t. For anyone who can pull that off the job pays well and is easy if you know the special, super secret trick that we’re going to let you in on after the reveal!

The Globe and Mail reported the other day that boutique New York investment advisory firm Greenhill was able to win the business of the Canadian federal government as a financial adviser  on their recent purchase of the Transmountain pipeline project. Greenhill is staffed with trench-worn investment banking vets. We like to think they’re a modern version of the guys from American Psycho who make a sport out of judging each others’ shoes, but they’re probably very nice. The firm doesn’t do traditional IB work, they just charge companies and governments a lot of money to make sure they aren’t getting ripped off by the sharks they used to work with and for.

That’s “Greenhill” as in “pile of money.”

Greenhill would sit across from Kinder Morgan’s adviser TD to hammer out the particulars of a deal that both sides were eager to do because, by all accounts, there weren’t any other buyers.

Nonetheles, these great titans of finance owed it to their clients to come up with a fair price for the beleagured, half-built asset. Since they’re vets, they knew that projection and cashflow analyses and all that boring stuff that is generally submitted as support for a valuation was just pointless busywork. They could have an intern do it later to fill out the file. This valuation is already done; it’s in the financial statements!

Kinder Morgan Canada LTD (KML.T) is a $1.7B market cap, publicly traded, partially owned subsidiary of $36B Kinder Morgan Inc. (KMI.N) the American majority shareholder. The Trans Mountain pipeline, its expansion, and the seaport at the end of it were Kinder’s core assets. Its other assets are support infrastructure for the pipeline, including various tank terminals and another pipeline that brings condensates up from the US to Fort Saskatchewan to be used as diluting agents in the diluted bitumen for shipping by pipe.

The TransMountain is Kinder Morgan Canada’s reason for existence and it always has been. Those of us who have been in BC long enough will remember that Kinder Canada came into existence when they bought the original owner of that pipeline, Terassen Gas (formerly BC Gas), and sold everything else to Fortis. Effectively, the pipeline IS the company.

A few local outlets like The National Observer and The Tyee have been doing their own analysis to come up with reasons the government got rooked here, but they’re over thinking it and would never last on Wall Street.

Kinder Morgan Canada’s accountants had already done the work when they filed the financials for the period ending March 31, 2018, listing $4.6 billion in assets. Now… there’s cash and debt in there… receivables and payables… they mostly net out… what’s the sense quibbling about the details? These people are on a deadline! All the leftovers, like the tank terminals and the dilutent line… those look like about the value of goodwill. Shave off $100M so the government feels like they’re getting a bargain, and the good people from Ottawa can get started on their victory lap.

Kinder Morgan is sideways after the news because they just had their balance sheet turned into a pile of cash, and the market doesn’t rate cash.

That’s a wrap, folks. Go have a fine scotch. You earned it.

American Psycho is a work of fiction that doesn’t depict the people from Greenpoint…
as far as we know.