What the hell is in the vodka on Howe Street that all of a sudden every new weed deal is coming out tied in knots that enrich the core crew at the expense of everyone else?

We’ve spent three days shining a light on MedMen’s (MMEN.C) terrible go-public structure, which enriches execs at the expense of the company and shareholders, and showers them in bonuses every month, a situation that has led to around $400 million in market cap disintegrating over the last few days.

Sure, In Vancouver we’re used to deals where insiders are loaded with literal penny (or ha’penny) stock before they even announce what’s going into their shell, and we know that’s one of the costs of doing business on the Venture Exchange – that those early guys will blow their cheap paper out and the company will face pressure as a result.

That said, those companies also have four months of trading holds to convince people to keep holding on to their stock, and most execs have their paper escrowed for up to three years, so ultimately the execs will share a common bond with investors because when the share price rises, all of them benefit.

But these CSE deals where the guys bringing the company public hand those execs ridiculous golden parachutes, absurd bonuses, salaries that would take a few quarters of company revenues to cover, and almost the entirety of all voting stock hoarded among themselves, is like something the OTC folks would put a skull icon next to as a warning.

Hey, CSE! Being easier to deal with than the TSX is admirable, but that doesn’t mean I should be able to bring you a fentanyl deal and get a green light to go public. Do better.

Which means the untradeable Class A shares that were divvied up before the company went public will win every vote, for every thing. The CEO could decide he’s going to pivot into human trafficking, and there’s not a damn thing your votes can do about it.

Maybe the execs wanna give themselves a 500% pay rise and a few million in bonuses, just cuz? Instant approval.

Company crashes but the well paid execs don’t want to be fired? They can just vote not to fire themselves.

Hefty acquisition offer lands, but the execs feel like they should get a special bonus for agreeing to it? They can decide to reject the offer if they don’t get a sweetener, effectively killing the deal, and there’s nothing you can do about it.

The company, which has no website to speak of (correction: We found it), put out a news release bragging about how it, unsurprisingly since it has 1.3 billion shares outstanding, broke CSE volume records on day one.

The company wishes to thank all its shareholders and stakeholders for their support to date, which has resulted in a record-breaking launch into the Canadian cannabis marketplace.

Why? Let’s have James West from Midas Letter tell it.

That these structures are permitted to be called “public” companies, is, in my view, a regulatory shortfall. How can you protect your interest if your vote doesn’t matter?

The company says it’s done this because it doesn’t want some unwanted takeover offer to roll in and be accepted against the say-so of the core guys, but that’s ENTIRELY THE POINT.

When you go public, it’s not your company anymore, it’s PUBLIC. We all get a vote if we buy the stock, and if the company is being run poorly, we get to hit the AGM with pitchforks and torches, and vote the bastards out.

Admittedly, there are some companies run in a way similar to what the MMEN and HUGE insiders desire for themselves, so it’s not like what they’re doing is illegal. But those companies with dual class shares are usually monsters like Teck Resources (T.A.T) that have long track records, big revenues and profits, people at the helm who are trusted and respected, and which would become the subject of immense media scrutiny if they tried to pull shenanigans on shareholders.

Yes, FSD has a cannabis grow license and a facility they’re working on. That’s nice.

But yet more codas on that; Cannabis Wheaton (CBW.V) is going to pay to have that facility finished, and will receive HALF OF ALL PRODUCT FOREVER in return.

First, anyone who was around the weed scene in 2014 remembers the struggles Canopy Growth Corp (WEED.T), AKA Tweed, had with turning an old Hershey’s chocolate factory into a weed facility. You’ve got decades of vermin and bacteria and inherent structural issues that you’re going to have to turn into a pharmaceutical grade facility with barely a speck of dust out of place, and that’s not cheap, not easy, and sometimes not possible.

The fact that they’ve raised $53 million and have a grow license is nice, but the Cannabis Wheaton deal ties them in knots forever on cost to produce. Whatever your ‘cost per gram’ is, you’re going to have to double it to factor for what’s going to CBW. THIS IS A BIG DEAL.

So not only are you paying for stock that doesn’t come with votes attached to it, but you’ve also bought yourself, effectively, half an LP.

Thankfully, while the desire to bring the next big billion dollar weed win has inspired Canadian junior market dealmakers to make some terrible deals of late, it appears the markets themselves aren’t falling for the ruse.

As we’ve discussed in detail, MedMen has been slaughtered since it went public, and was down again today. It’s sharted from $5.73 in the opening minutes to $4.10 three days later. 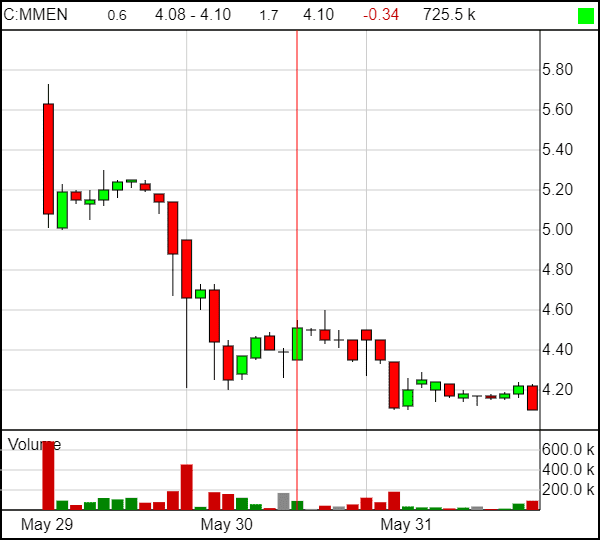 And here’s the thing that should scare MMEN investors more than anything else: The shorting hasn’t started yet.

There’s, frankly, not a lot of free trading stock out there, which means shorters have nothing to borrow (yet), and it also means it’s been the insiders that have been selling into the market crush.

When the shorters are able to do their thing, I suspect it’s going to be horrible.

Ditto for FSD: No shorting yet, but there’s sure been a lot of early cheap paper blowing out in the first few hours of trading. Talk up volume records all you want, but the trend has been red, and it was from the first minute. 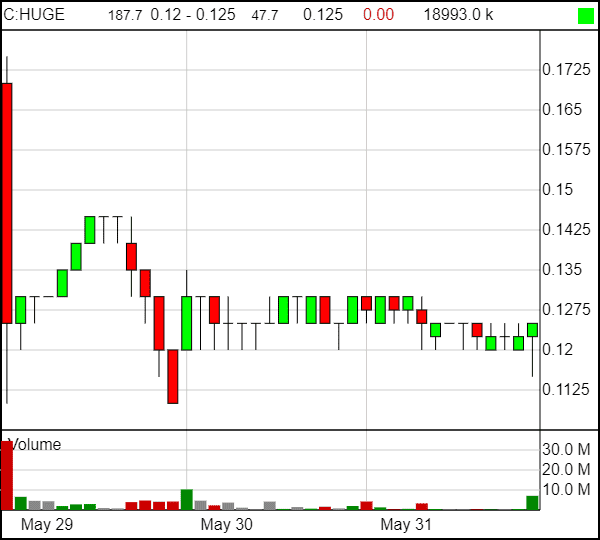 Again, that’s insider/early investor stock that’s being sold into the slide. Apparently the outlook at HUGE is so great that the people closest to the company are selling up THE FIRST MINUTE THEY CAN.

I don’t begrudge an entrepreneur his or her chance to make some money off a deal. That’s fine. I’m good with that. I’m even okay with guys who get in early because they’re buddies with whoever, and blow out a little stock early against the interests of the investors sticking around. It happens, we know it happens, we’ve baked it into the system and prices and our expectations.

But I have a massive problem with stacking a company’s structure so that there’s far more likelihood that the shareholders will be taken out back behind the house and beaten with rope than there is that the C-suite inhabitants will work to make them wealthier.

MedMen is a bad deal entirely created to enrich three guys. HUGE looks to be the same thing, with maybe a dozen folks getting the benefits.

Compare that to Green Organic Dutchman (TGOD.T), which continued to grow today, currently on a 5x for the small investors it deliberately gathered for its pre-public raise at $1. 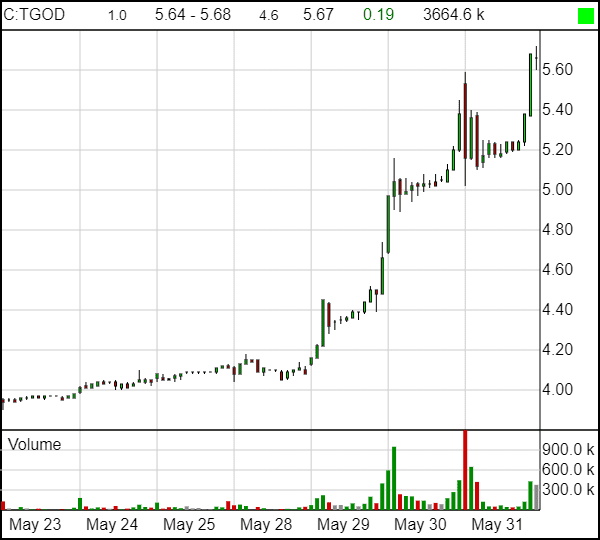 To those folks who came to TGOD through us and sat with their money tied up for a year plus in the faith that this day would come, cheers.

And to those putting themselves ahead of the general investing public?

The ones who need to have all the votes so they can’t be removed, or second guessed, or overseen?

The ones who think ‘public company’ means the public takes the risk and they take the money?

FULL DISCLOSURE: TGOD is an Equity.Guru marketing client and we own stock and warrants in it. The others are not, and may also be trash.