Here’s why Australian vanadium stocks are on fire

Elon Musk recently built a large battery plant in South Australia that has stabilised the power grid by collecting and storing excess power when it is cheap and discharging it during demand spikes.

The next time Musk builds a massive new battery, it’s likely that he’ll use a completely different technology.

There are plenty of early warning signs that shit is getting real in the vanadium sector.

What is so special about Vanadium batteries? 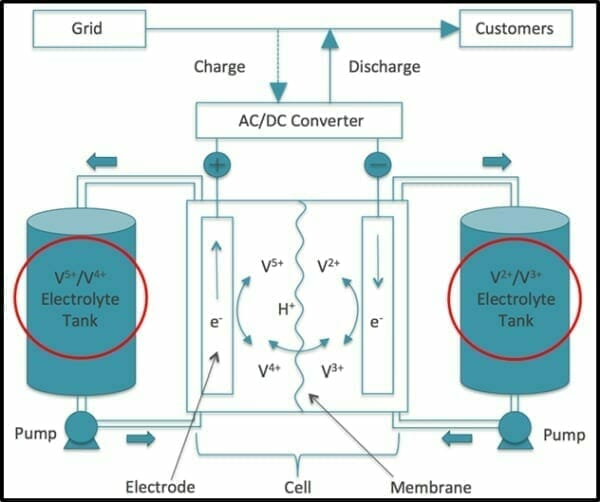 In a vanadium battery, V2+ is oxidized to V3+ in the negative half-cell and an electron is released to the external circuit.  When vanadium is the only element present on both sides of the cell, “cross diffusion” does NOT result in permanent capacity loss.

If the science is spread too thick for you there: here’s the simple explanation:

VSun’s batteries are “safe, non-flammable and can be cycled many thousands of times with almost zero capacity degradation.”

AVL has a current market cap of $67 USD. 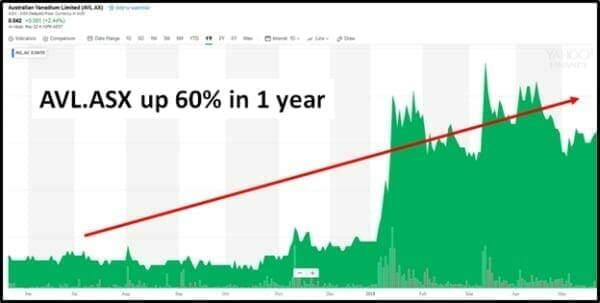 The project’s Northern Block has an inferred resource of 62.8mt grading 0.8% V2O5.

TMT recently reported it had recovered up to 97.8% vanadium from magnetic concentrates.

According to a March 18, 2018 research note, “Metallurgical test work to date has been very positive, highlighting the potential to produce a high grade vanadiferous titano-magnetite concentrate.”

TMT has a current market cap of $23 million USD.

Intermin Resources (IRC.ASX) has an interest in the Richmond project in Queensland’s north west.

The company has collected about 1.2mt of vanadium ore for metallurgical testing, with results expected this summer.

According to a recent brokerage note: An update to the Mineral Resource for the Richmond project has moved it into the ‘world class’ category

“It’s a monster Resource and we have Chinese backing in our Joint Venture partners who can deal with taking it to that commercial level,” said Managing Director, Jon Price.

IRC has a current market cap of $36 million USD.

A recent Bloomberg article claimed that “Vanadium needs Elon Musk or another big player in the global battery market to get behind the metal in order to share center stage with other energy-storage components such as lithium and cobalt.”

Before that happens, there are some obstacles to overcome.  Vanadium batteries are bulky, so they don’t work if there is a space crunch.  Vanadium is also not cheap.

“Trying to sell a vanadium-flow battery to someone who only can think of lithium is very difficult,” stated Vincent Algar, managing director of Australian Vanadium.

As we see from the above charts, Australian investors believe in the future of mega vanadium batteries.

We think that belief is coming to the TSX.V.

That’s why we’re shouting “Vanadium” from the rooftops now.

Full Disclosure:  We have no commercial relationship with any of the companies mentioned in this article.