Could Vanadium Corp (VRB.V) be worth $1 billion?

Yes – we’re guilty of “click-bait” – especially when we’re talking about a $22 million company.  But we’re guessing you’ll forgive us if this article contains a decent wealth-generating idea.

Vanadium is a (physically) beautiful metal that is currently in supply deficit.

As we pointed out in a recent article, “after a series of deadly building collapses, the Standardization Administration for the People’s Republic of China, recently announced a new rebar standard – requiring the use of vanadium.

“Rebar” is used to give internal structure to poured concrete.  China produces about 200 million metric tons of rebar each year.  China’s rebar regs is one key driver of spiking Vanadium prices. 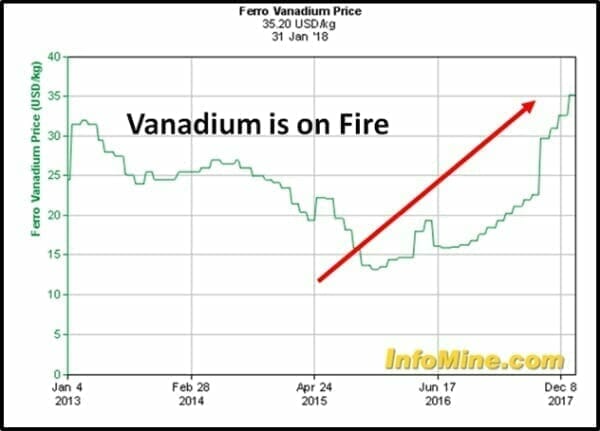 Currently, about 80% of vanadium production comes from China, Russia and South Africa.  Serious shipping charges to get it to Pittsburgh.

The bullish case for vanadium is revealed in the recent financial results of Canadian Vanadium producer Largo Resources (LGO.TSX).

To review:  Largo booked a 7% increase in production and a 210% increase in revenues.  The company is currently valued at almost a billion dollars.

Vanadium Corp (VRB) has no revenues and is valued at about $22 million.  We see a pathway to VRB achieving Largo’s revenues.

Surface mineralization surface is open at depth and along strike. 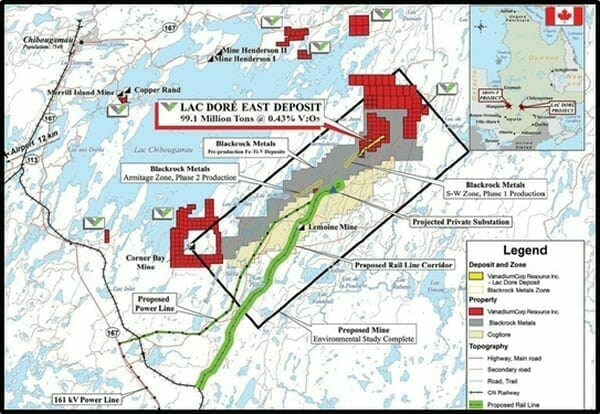 Okay – so VRB has a bucket load of vanadium in mining-friendly jurisdiction – but they still have to put that baby into production.

Vanadium Corp owns patents on a vanadium extraction process that may be far more valuable than the minerals on its land package.

To understand the size of this opportunity – we need to switch our focus from steel to batteries.

Utility companies are starting to swarm to VRFBs.

Before we get into Vanadium Corp’s game-changing vanadium extraction technology – we want you to know more about the vanadium battery story.

At Equity Guru, we can manipulate images (see the jaunty red arrow imposed on this article’s top chart!).

But the reality is, our colleagues at Visual Capitalist have slightly more advanced skills. 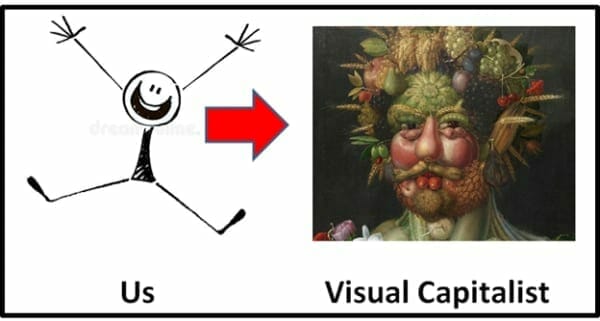 So go ahead Visual Capitalist – turn this vanadium battery story into eye-candy.

Courtesy of: Visual Capitalist
Here’s how Vanadium Corp collides with the vanadium mega-story.

Conventional vanadium production has not changed in over 60 years. It’s a clunky, low yield, inefficient and environmentally damaging process that emits two tons of carbon for every ton of product.

Vanadium Corp has partnered with Electrochem to invent a new chemical process that has the potential to revolutionize energy storage, steel making, vanadium applications and iron production in the titanium industries.

Electrochem Technologies & Materials is a private Canadian corporation that invents, develops, patents, scales-up and commercializes proprietary chemical, metallurgical and electrochemical technologies that are innovative, and sustainable.

The process is explained in detail on Vanadium Corp’s website, but here is the most important chart.

According to Global Market Insights, “The global microgrid market is set to surpass US$19 billion by 2024, including remote mines and off-grid communities. The global energy storage market is expected to increase by 600% by 2030.”

At Equity Guru, we take the business of due diligence seriously.  But we have no chemical engineers on staff. It’s possible that VRB’s propriety vanadium extraction technology is a stainless-steel man-sweat de-salinator.

But we’re 100% sure Ultra Power Systems knows their shit.

Part of our belief in the potential of VRB stems from a 45-minute conversation we had with the CEO, Adriaan Bakker at a recent mining conference.  The dude has an evangelical commitment to VRB’s vanadium objectives.

In a business that is full of crooks and charlatans – we’ve developed Spidey-senses for CEOs with real ideas, real objectives – and the ability to execute.

We think Adriaan Bakker – and VRB – have a real shot to make some noise in this red-hot vanadium sector.

Full Disclosure:  We have no commercial relationship with VRB.  It’s early days for vanadium.  We will be signing vanadium clients. If VRB is one them – it wouldn’t ruin our day.

Are you guys really promoting a public company that doesn’t ‘publicly’ and freely make available it’s share structure or financial statements on their company website? Also, aren’t they under investigation right now with their recent PEA technical report? Maybe I should go back and actually read this article in case you are putting it in the flea bag category and I missed something.

Hi Richard,
We’re not ‘promoting’ anything. We’re writing about a company that isn’t a client and has no commercial connection to us. Lukas has passed on your concerns to the company and will add any additional information in time.

Dear Richard, since you brought it up, I’ll concur: maybe you should “actually the read the article” before putting fingertips to keyboard. However, you ARE correct: the current website is unruly. VRB is building a new one with a new deck that contains the share structure. In the meantime, the information you are seeking is available on Sedar. To summarize: there are 227 million shares outstanding; 317 million fully diluted; 90 million warrants (.06-.12). Regarding the PEA: “under investigation” is pushing it. The BCSC asked VRB to refile the PEA on one of its mining projects. It’s a technicality. VRB hired the same company that did Largo Resources PEA (MICON) to upgrade and refile.