Aurora Cannabis (ACB.T) is either smarter than everyone else with its Medreleaf (LEAF.T) deal, or…

I have a theory, and I’ll probably never know if it’s accurate, but it goes like this:

Medreleaf’s (LEAF.T) executives and board looked at its valuation recently and said to themselves, “It’s never going to be higher than it is right now. We should find someone to buy us right now because farming is hard work and prices are shredding and new licensees keep coming and we’re not allowed to market ourselves and, let’s be honest, if we sell right now we’ll never work again and it’ll be someone else’s concern about how to justify this valuation.”

Aurora Cannabis (ACB.T) would obviously be their first stop on the ‘take me’ tour, because Aurora buys everything, and has yet to underpay on anything I’m aware of.

Secret negotiations went on for a bit before Medreleaf someone told the media they were for sale. And that maybe Aurora wanted them. But that, if anyone else wanted them, they’d hear those people out.

This was, of course, denied but not denied by Medreleaf and Aurora for a while and when nobody else stood up to take the LEAF team, Aurora completed the deal.

$3.2 billion is the final price tag, a whopping 34% premium on the 20-day volume weighted average on both stocks.

That’s more than they should have paid. Let’s be honest, there was only one suitor here and the deal would have gone ahead without the meaty premium because Medreleaf is ready to be out.

This should be informative for investors who wonder about the future of the marijuana space. Consider that one of the front runners of the business just tapped out. They didn’t ‘expand to foreign countries’ and ‘do big deals with booze companies’ and ‘bring on pharma execs’… they said ‘buy us, we’re done.’

That tells me they saw their deal as overvalued and with limited upward potential, upcoming ‘adult use’ law changes be damned.

And Aurora picked them up – well there’s a surprise. Aurora will literally buy the seeds out of your dookies if they think the market will keep their valuation high as a result, and this deal, while not cratering Aurora’s valuation at all, sure as hell didn’t add anything to it. 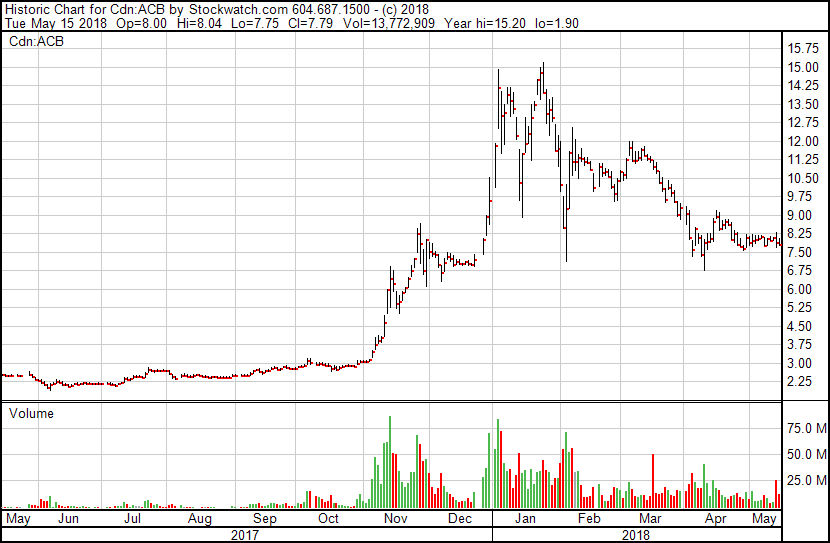 If you were alive in the 80’s, you saw what the mindset of ‘buy everything, whatever it costs, and enjoy the jump in value‘ thinking brought us. Eventually, that shell game starts to slide. Eventually you have to do the actual work.

Aurora has been buying things for months, seemingly to justify its market cap. Overpay? That’s fine. All share deals? Beautiful. In fact, as the dust on this deal was settling, aurora announced it was taking out more of Hempco (HEMP.V), which has financials from the last quarter that give cause for concern. A strong South Korean export business has been crimped, and the outfit will be looking for ways to replace it. But hey, Aurora will take more stock in the meantime.

Less than a week ago, Aurora upped its stake in Alcanna, which I happen to like because retail storefronts make more money than farming. Aurora paid $34m for a 25% stake in the company, valuing it (and its 229 retail liquor stores) at $136m. Fair.

Before that, the company poured $23m in the Green Organic Dutchman (TGOD.V) IPO, and the $1 billion Cannimed deal before it was another ‘buy at whatever cost’ deal that got only more expensive as Cannimed tried to fight off the attack.

In the meantime, Aurora lost $10m in the most recent financial quarterlies filed.

The Globe and Mail’s Tim Kiladze:

A quick peek at Aurora’s financials will be a bit of a buzzkill for anyone who buys this hype. The company reported its latest results last week and it lost $10-million in operating cash flow during the quarter – “the worst performance of all companies under coverage,” GMP Securities analyst Martin Landry wrote in a note to clients. Yet Aurora traded at 28 times his projections for earnings before interest, taxes, depreciation and amortization – a 60-per-cent premium relative to its peers.

…and took out a $230 million convertible debenture in March.

To service that debenture will cost Aurora $11.5 million per year.

Their total cannabis sales in the last quarter were $10.8 million.

Let’s think about that for a second – the company will effectively lose a full quarter of their weed sales annually just in servicing that particular debt.

Where exactly does this end? Will there come a point where Aurora CEO Terry Booth sobers up from this acquisition bender and let’s these pieces figure out how they all work?

A Globe and Mail article on an Aurora conference call around the deal yesterday raised some prescient points:

So far, Aurora has been the most aggressive buyer, with two billion-dollar deals this year. Investors didn’t fret too much when it bought CanniMed Therapeutics Inc. for $1.2-billion in January, even though the target’s valuation was hard to justify, but now that Mr. Booth is leaping at a deal almost three times that size, they ought to ask how any prospective takeover target is valued in a sector that’s so bloated.

When pressed on this front, Mr. Booth said he couldn’t divulge much because the valuation technique was his “secret sauce.” And when chief commercial officer Cam Battley was asked for cost savings from the merger, he didn’t have much to say, either. “We don’t have an exact calculation of the synergies,” he said. All he could offer was that the company’s chief financial officer and his team did the work, “and they all came out of that exercise with big smiles.”

To be fair to Booth, he has the runs on the board. He’s built Aurora up from the shaky shell that was Prescient Mining back in the day, banging about for 15c a share and arguing amongst themselves about who owns what, to a multi-billion dollar company currently.

The TGOD IPO was interesting, in that I expect Aurora to do with them what it’s been doing with Hempco, which is to keep raising it’s stake and eventually absorb it like Borg.

That changes the conversation among TGOD cynics and optimists, about whether that company is a massive sell-off waiting to happen when profit-loaded insiders can free up their stock, or likely to hold, and even increase its market cap as others come a-hunting.

It’s telling that Bruce Linton, the head honcho at Canopy Growth Corp (WEED.T), isn’t competing with Aurora for these pieces. Though Aurora is now challenging for the #1 spot in size and sales, Linton is looking to overseas opportunities and thinks his market share in Canada is a-okay where it is.

In other words, he’s not looking to pay the sorts of prices that are on offer right now, for more farming in a country that’s expensive to farm in, hard to market in, and in which you have to sell your product to the government at whatever fucking price the government deems worthy.

LPs are effectively vineyards now. Huge, sprawling, indoor vineyards in parts of the world that you have to heat 24/7.

And it will open the acquisitions season for those who need to either be selling themselves or buying others to keep up with the Joneses.

But consider this: Aurora paid the sort of price that LPs were worth in January, before they lost 30% of their value to the big sell-off.

And I don’t know anyone who would pay January prices for LPs today.

Nobody but Aurora. Protect ya neck.

FULL DISCLOSURE: I’ve got no dog in this fight. If y’all wanna buy into Aurora’s Svengali game, have at it. I’ve been wrong about them before but, in early January, when I suggested folks should sell at $15, I was also right on the money about them before.