Here’s What Happened May 10th 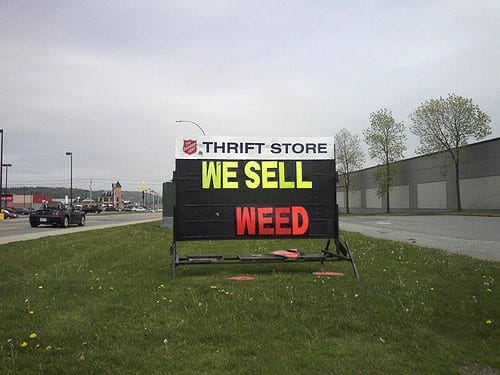 Namastaying Relevant: A Look At The Shifting Pot Market

Canadian Tire Earns Well, Upsets Street By Blowing It On a New Helly

Here’s What Happened May 10th.

Canadian Tire Corp. (CTC.A.T) reported the kind of steady earnings that the street likes from big box retailers. Same store sales up, profits down but not much. They’ll pay a solid dividend and continue with a buyback. It’s the kind of thing the financial press would have slept through if CTC hadn’t come in hot, all proud to have been acquiring the hottest brand of 1999!

The Globe and Mail reports that the Ontario Teacher’s Pension plan somehow talked a desperate-to-be-cool Canadian Tire corp into paying $985 million for Norwegian Raincoat maker Helly Hansen, and into taking on $50 million of operating debt while they were at it. Since CTC is already carrying $3B in debt, they likely figured “what the hell.” Canadian Tire has long mastered the art of ending up on the right side of debt transactions, currently holding about $4 B worth of Canadian credit card debt clocking juice at 22% or so.

We’ve really got to hand it to the Teachers here. $985 million is the perfect charm pricing to sucker Canadian Tire into buying a brand that was once the coolest thing but hasn’t been relevant for years. The $50m in operating debt feels like the taxes and eco fees being added on at the till. Hopefully they can print up a stack of home-made currency, only valid for future asset purchases, to hand over at closing time.

Photon Marches Ahead in Total Control

The earnings party in Richmond, BC continued today, with Photon Controls (PHO.V) picking up right where MAXR.T left off yesterday. The tight company reported $13 million in revenue to earn $4.7 million in Q1. Photon makes fiber-optics based instruments used in the manufacturing of semiconductors and solid state electronics. PHO was up $0.13 (+6.84%) on 1 million shares of volume Thursday.

Back in the internet boom days, the Philadelphia Semiconductor Index was how traders measured the digitization of the planet, reasoning that the rate at which chips are being sold is as good a tracking as any. We figured we’d look it up too see if hardware manufacturers are cranking out more chips and graphics cards to meet the demand for crypto and gaming explosions. The index is doing just fine over a year, beating the S&P by 20%.

Sitting on a $24.7 million order backlog, Photon had the stones to use this quarter’s earnings release to predict $14-$16 million in revenue for next quarter. The $221 million market cap junior has $33 million in cash and no debt.

No dividend on PHO, as the company prefers to return money to shareholders through buybacks, and there’s a good case to be made for that. Dividends bring in the yield junkies, and it ends up hurting when they get cut quarter to quarter. Buybacks are more flexible. They can help maintain an orderly market, and can always be unwound through a share issuing. Michael Batnick had a great post the other day about the success Apple had buying stock back. APPL closed at an all time high of 189.79 today, and is $50B away from a trillion dollar market cap.

Clearly, Photon Control is happy to grow carefully here with the cash that they earn. They’ve applied to tier up to the TSE. When that happens, expect the financing offers to come flying in and get bigger and bigger until one of them takes. At that point, the question will become whether or not this operation can scale.

Gaming Corp Beats The Street Like It Owes Them Money

The biggest beat of the season so far is clearly Great Canadian Gaming (GC.T), who reported $230.5 million in Q1 earnings, a same period increase of 62%, and pretax earnings of $88.9 million, an increase of 84%.

The bloom was off the rose for a while on GC back in September when Sam Cooper reported that their River Rock Casino in Vancouver was being used in a money laundering operation. GC said at the time that they followed all AML laws and regs, and reported all the transactions that they were supposed to to the BC Lottery Corp, but the street wasn’t convinced. The stock went mostly sideways until today, when the big numbers made it clear that, whether Triads have figured out how to use GC’s casinos to wash money or not, they’re still casinos.

Our favourite weed-retailer-to-be doesn’t like to skimp on the news flow. Namaste (N.V) had already traded $4M worth of stock by 10 am Pacific time on news that they had just signed an LOI to acquire a 51% interest in an Ontario numbered company with big plans.

2624078 Ontario Inc. will soon be renamed “Infinite Labz,” which sounds like an instagram handle. Labz intends to submit an application to Health Canada for a licenz to produce medical cannabis oil, and another application to become a licensed dealer of cannabis. The news about the LOI does not specify a price, but does say that N will be financing the construction of an Infinite Labz facility in Etobicoke, ON with a $750,000 shareholder loan. The loan is to be “repaid from net profits,” a rare substance in the $24 billion pot sector.

In summary: Namaste intends to buy a controlling interest in a numbered company, staffed by unnamed people with unknown experience, which has yet to apply for a license to produce or sell cannabis oil, and to loan them 3/4 of a million dollars so that they can build a facility to produce cannabis oil in Rob & Doug Ford’s home town.

N.V finished the day up $0.14 (+10.29%) on 4.89 million shares of volume to close at $1.50. We consider their continued successful creation of volume to be an indication of the street’s increased interest in the retail vertical ahead of the coming legalization. The chatter is all about oversupply right now. The Motley Fool’s Sean Williams wrote a listicle on Monday, without even a hint of scepticism or irony, about 100,000 kg per year that the 7 biggest pot stocks are going to be churning out. We note that such production would take more build and execution that we’ve seen from anyone but Canopy, Medreleaf and Aphria so far. To be fair, Williams doesn’t say when.

The weed sales champ of 2017 was Canopy, who sold 7,720, twice as much as the next contender (Aphria). Health Canada reports 35,000 kilos being sold nation-wide. EG calculates the pubco producer total at 25,000 kilos.

At the moment, the volume in the Venture-listed cultivators is concentrated in companies who have supply agreements with provincial governments – whether they’ve shown they can produce the volumes to supply them or not. Hydropothecary (THCX.V), Cannabis Wheaton (CBW), and Organigram (OGI) were 1st 3rd and 5th in dollar weighted volume on the Venture today (Namaste was 2nd and Photon 4th). Cronos (CRON.V), whose $1.3B market cap is larger than all of those cultivators, does not report having signed any government supply agreements. Since they don’t report sales volumes, CRON’s unit sales are unknown. Cronos will be reporting earnings Tuesday.