Saw a news release this week from a company I haven’t looked at in years, and it brought a wide smile to my face because, damn it, this is the future, yo.

Enterprise Group Inc. (E.T) has further enhanced its proprietary dispatch and asset tracking software now known as StarChain. The company is adding a decentralized and distributed ledger to its equipment to definitively record all machine data as transactions on a secure private network. The recorded data will be verified via the StarChain modules and then uploaded to the StarChain network.

Blockchain for business is a thing.

The purpose of StarChain is to monitor location, usage and address repair issues in real time to maximize revenues and vastly lessen equipment downtime from the company’s extensive pool of rental assets. If a piece of equipment fails or experiences a mechanical deficiency on a remote project site, StarChain alerts Enterprise and the fleet manager immediately so that a replacement can be deployed, increasing revenues, efficiency and asset life.

No crypto mining. No ICOs.

Just better business practices with a decentralized distributed ledger at the core.

And Enterprise Group, which rents specialized equipment to the oil and gas, construction, infrastructure, and resource industries, didn’t just decide to slap this on to its business plan to help move paper. They fell ass backwards into it a few years back.

When Enterprise Group acquired Westar Oilfield Rentals in 2014, the management team was working on a business management and dispatch software.

After exhaustive and unsuccessful efforts in sourcing an effective software solution, it was apparent that the group needed to develop this system in-house. Enterprise Group continued to finance and upgrade the project, resulting in this unique and proprietary technology asset, critical to the profitability and cost mitigation of all the company’s subsidiaries.

“With the components developed, we began process mapping our existing business operations. As a result, we were able to considerably reduce our https://e4njohordzs.exactdn.com/wp-content/uploads/2021/10/tnw8sVO3j-2.pngistrative costs by automating many of the human elements,” stated Des O’Kell, senior vice-president of Enterprise Group. “Furthermore, with its implementation, the cost benefits that emerged from asset tracking are substantial.”

So are they going to sell this technology to other companies and make money licensing it?

Enterprise has no plans to sell or license what it sees as an incredible competitive advantage. The technology will be extended to the operations of future acquisitions, this will allow for the significant growth, in size and geographical reach.

And here’s what that looks like on a stock chart: 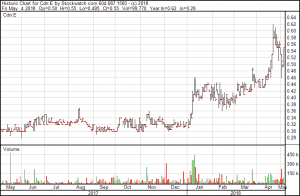 Enterprise has divested itself of underperforming assets, sold off others that brought a nice profit in return, and eliminated its debt in a great example of turnaround management. But bringing the blockchain edge to their deal? That’s next level shit.

This is something we’re increasingly seeing, even from companies outside the traditional blockchain space. Use the tech to do real business, and the money that was being tossed at blockchain last year can be tossed once more.

CUV Ventures (CUV.V) is doing something similar. They’ve put out a lot of news about the bits and pieces they’ve purchased, built, and found behind the couch cushions, but this week came the news telling how all of those pieces will work.

CryptoLiquidity deploys secure, stand-alone wallets that allow the user to seamlessly store their overall assets, whether crypto, CCU coins or fiat currencies, coupled with a method to authenticate participants in accordance with KYC, AML and GDPR regulations. Users do not need to worry about the loss or theft of their keys, as keys are managed by a distributed enterprise key management system (EKMS). To improve the performance of the platform, CryptoLiquidity uses an artificial intelligence engine (SAM) to enable the platform and, the platform https://e4njohordzs.exactdn.com/wp-content/uploads/2021/10/tnw8sVO3j-2.pngistrators, to make the right decision at the right time to minimize cost and risk and maximize the value and security of every transaction.

CUV is putting together a financial network for the developing world, including factoring loans, remittances, microcredit, and B2B transfers, plugging in airfare commerce functionality and hotel listings, allowing a customer who is looking to do business with Mexico or Cuba or Panama, as an example, to send their money quickly and inexpensively, book a flight to the city the transaction will conclude in, stay in an inexpensive local B&B, and save money at every corner of those bookings.

On the other side, local businesses in the same countries can borrow money, or receive remittances, and receive their cash at a network of ATMs, rather than getting ‘robber baron’ed by Western Union.

Meanwhile, over at Block One (BLOK.V), they’re ditching their crypto miners and selling them on to Hashchain Technologies (KASH.C).

Block One Capital Inc. has signed a definitive agreement with Hashchain Technology Inc. for the sale to Hashchain of its 90-per-cent interest in TG12 Ventures Inc.

TG12 owns 1,000 S9 Antminer rigs, of which 100 are currently operational at a mining facility in Montana in the United States, with the remaining 900 expected to be operational by or about the end of the quarter. Pursuant to the agreement, Hashchain will acquire 100 per cent of TG12 in exchange for 8.9 million shares of Hashchain at a deemed price of 35 cents. Block One will receive all of the Hashchain shares issued pursuant to the agreement.

The thinking here is it’s a deal that benefits both sides. Hashchain is doubling down on the mining side, looking to use the size of its growing operation to bring better margins.

“Based on the data points available to Block One, we drew the conclusion that the future will be dominated by large-scale mining operators who are able to achieve meaningful economies of scale. It became clear that it was unlikely that TG12 would be able to compete effectively in that rapidly approaching future. Therefore, this deal with Hashchain allows Block One to receive 8.9 million Hashchain shares and gain exposure to Hashchain’s greater anticipated operating scale, which, following this transaction, will be a reported total of 4,870 rigs, which is equivalent of approximately seven megawatts,” said Sothi Thillairajah, chief executive officer of Block One.

On the Block One side, they’re pushing hard at one sector, and it’s a big one:

[40% owned subsidiary] Finzat continues to make positive strides in developing relationships among key participants in the U.S. residential mortgage market. Recent talks with a housing government sponsored enterprise (GSE) have served to highlight opportunities for a synergistic partnership whereby Finzat would bring benefits of blockchain applications to mature, well-established business lines. Senior-level discussions continue with a view toward designing application prototypes within the next few months. Furthermore, Finzat has opened a dialogue with a nationally recognized provider of risk management software and consulting services to over 120 institutional clients and several housing GSEs. A framework for a formal arrangement between the two parties is currently being formulated.

Hashchain Technology Inc. had a 52-per-cent* increase in users for its cryptocurrency accounting and tax software, Balance, since the acquisition of Node40 on Jan. 30, 2018. Between February and April, 2018, Balance integrated support for the Coinbase and Gemini exchanges to expand the service to more high-volume cryptocurrency traders.

The reason Node40 is getting hot is simple: Taxes.

“The recent tax season lit a fire under cryptocurrency holders, who learned the complexities and ROI [return on investment] impact of regulatory compliance,” said Patrick Gray, chief executive officer of Hashchain. “With Balance, we have developed a simple-to-use solution that gives users the ability to track gains and losses in real time to determine taxes owed and help create a more accurate depiction of their total coin profits throughout the year. Hashchain is dedicated to continuing integrations with new exchanges and growing the user base even further.”

…And that’s just from a short look at news stories posted in the last 24 hours.

This shift to doing real business with the blockchain both demonstrates the stupidity of the Blockchain-mania from late 2017, where companies really didn’t have to do anything but kick a couple of Antminers into a shipping container to get 8-figure market caps, and outlines the potential for a future where 9-figure market caps make sense for companies that execute.

FULL DISCLOSURE: Hashchain and CUV Ventures are Equity.Guru marketing clients, and the author holds stock and warrants in both.

Hey Chris, is it possible to get an update on what you think of YD.V? Their most recent financial statement was (from what I’ve read) like something out of a toilet, and there are some worries in terms of the company’s ability (or willingness) to execute. Are we still in early days? Is there hope? Or are we running on empty news releases and no volume willing to buy in? Stock price is discouraging and has fallen to new lows. Did you manage to abandon ship a while back, or are you HODLing?