Today one of our clients, Lifestyle Delivery Systems (LDS.C) announced a new deal to acquire new commercial extraction technology from Quality Resources (QR). This is good news for LDS as it’s the latest sign they are moving forward with their plans to be a major player in the California market.

More on that in a bit – but this deal throws light on an interesting area in the cannabis sector and there’s value in looking at what’s happening in extraction land. As with all the other pieces of this gold rush, the race is on to be the industry standard.

There are a lot of companies making extraction gear for the cannabis market. Some of our clients make really good stuff. The market is wide open and companies are betting on things such as automation or other smaller niches – all to jostle for brand awareness and ultimately, market dominance.

The day of the joint is ending. There’s a fascinating paper on consumption outlining how many different ways people are enjoying product. Everyone still burns dried leaves for now, but social pressure, trends and health concerns all point to a shift to other forms.

All of these options, from teas, to edibles to vapes all need cannabis oils. Right now there’s a lot of promises out there, but the first company that can deliver consistent, scientifically reproducible results and quality will have a significant advantage.

LDS’ agreement gives them access to QR’s extraction technology, which claims to be developing a process to strip contaminants such as pesticides from product giving clean outputs.

Cannabis growers are just as new at this scale of production as anyone else. Crop quality varies wildly, and stories of contaminated weed are all over the industry. It isn’t yet known how much product is tossed for lack of quality or contamination, but it can surely be had for the right price – and the money is always made in the buying.

Otherwise QR’s tech is standard stuff – there are some interesting new ways to get oils from plants being adapted for cannabis, but we’ve been doing that since literally the stone age. What’s more interesting will be the new ideas adapted for this market. QR’s sanitizing tech is a good example, and our client Quadron Cannatech’s bet on automation is another.

QCC – not a shopping channel, but a boss.

Another client of ours, Quadron Cannatech (QCC.C) is also in this space. Full disclosure, i’ve done some work for them. They are also marketing extraction equipment, and betting on R&D, but they feel automation and integration is the way to go.

The first step in their master plan is the BOSS system. It’s a Plug-and-play CO2 extractor that sits on 4 casters and looks like a mini-gothic cathedral. The whole thing can be operated by a single person.

Their plan is to add more integrated gear to the production line until the whole laboratory is ready to go as a turnkey operation. It will all be automated too. Stick a bushel of product in one end, and open the tap on the other.

They will delivering at least 10 units in 2018 and be demoing the BOSS at Lift in three weeks if you are in Hogtown and want to see it in person.

The Book of LDS

LDS’ is the sort of customer both QR and QCC are chasing. They are growing fast, they need to produce and they are running just to keep up. They went from holding 1.6m in assets in FY2016 and by end of 3rd Quarter 2017 that had ballooned to $11m in their latest financials, released on April 30.

The balance sheet illustrates their aggressive expansion with a lot of those assets tied up in equipment, licenses (like the QR one) etc. This is a sign of someone gearing up, not papering over problems.

The good news is, the capacity to scale their processing operation will be helpful to maintain that growth. The sort-of-bad news is I have no idea who will turn out to be the General Motors of extraction, and who will be the Stanley Steamer. (Steam – CO2 – get it?) 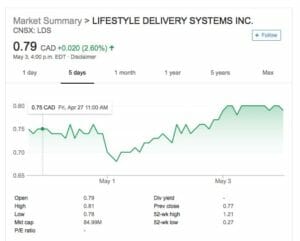 Looking at the stock – the market shrugged its shoulders. It shouldn’t. LDS is moving forward and securing its future. Ensuring it has a technological edge can mean the difference in living or dying in the long term, and the potential of QR’s cleaning tech will be a huge advantage if it pays off.

LDS looks like it went through the wringer and survived. I don’t think it will fly under the market’s radar for much longer. If that isn’t your cup of tea, look at extraction companies- selling shovels to gold miners made a lot of hardware store owners rich – extraction companies are in the shovel business of the weed rush.