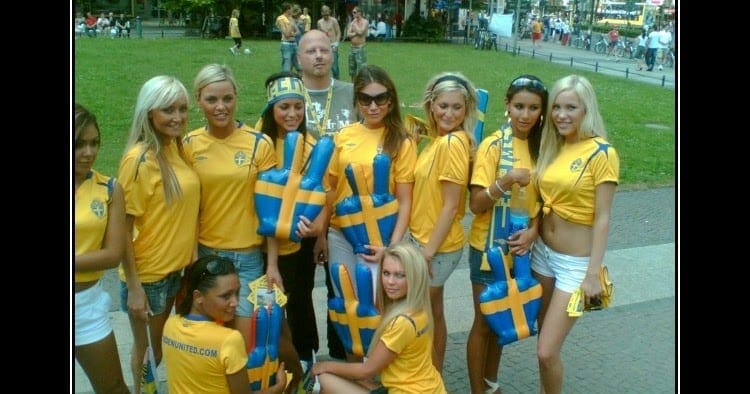 This is a cool story. It involves a royalty company – EMX Royalty Corp (EMX.V) – which acquires projects, builds value via early-stage exploration, and then finds a serious partner to carry the baton for the remainder of the race.

EMX doesn’t pass along its projects to just anyone. They have their standards. They have a habit of setting the bar pretty damn high.

Understanding the trends, appreciating the fact that humongous high-capex mega projects are nearly impossible to finance this day and age, management set their sights on new quarry – smaller, higher-grade projects with a lower capex, higher IRR’s.

Boreal met EMX’s high standards for a partner. EMX had geologically prospective projects that fit the dimensions of what Boreal was looking for. Boreal liked what they saw in EMX’s project portfolio. Happy-Happy. Joy-Joy.

Aside from generating immense joy (and happiness), the union makes sense. It’s also very much win-win.

Boreal’s projects number six according to my count. Four are base metals, with minor precious metals credits. Two are primarily battery metals. I wouldn’t be surprised to see the list grow – the company started out with only four projects not too long ago.

The projects – all Scandanavian – are located in Sweden and Norway.

Slightly OT, I recall reading somewhere that Swedes, both men and women, though assertive, can also be somewhat passive. They can even be passive aggressive as they abhor vocalizing issues, unlike their insufferable cousins across the drink.

In the pic below you’ll find a fair representation of the average Swedish male and female. 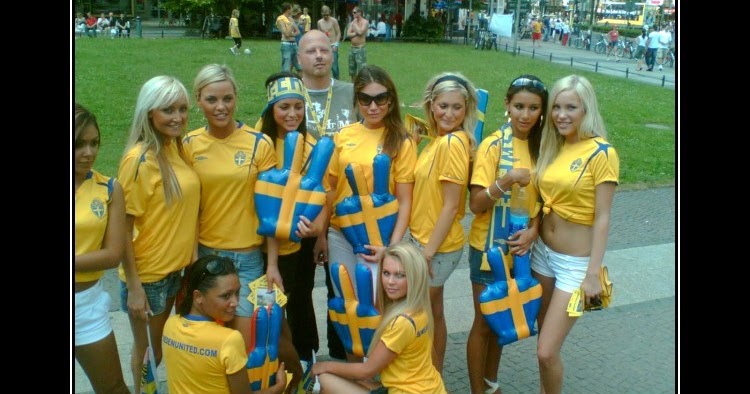 Equity Guru’s Lukas Kane delivered a nice summary of Boreal’s project portfolio back in January of this year.

These areas are top-shelf mining jurisdictions, consistently rated near the top of the list by the Fraser Institute’s Policy Perception Index.

The advantages in operating in this part of the world are many:

Boreal’s projects are all brownfield projects, meaning they are situated in active or formerly active mining areas.

Loaded to the hilt with prospective terrain, Boreal hit the ground running after IPO-ing only a few short months ago. 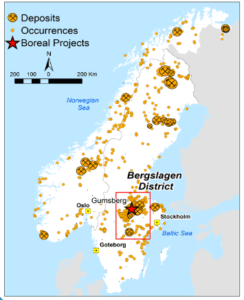 Talk about a brownsfield project, Gumsberg was the host to thirty historic mines. Most notably Östrasilverberg – THE largest silver mine in Europe between 1300 and 1590. Damn… that was before my time!

This historic mining occurred during a period when only primitive exploration and mining technology was available. This resulted in missed opportunity. Missed opportunity = Now Opportunity for Boreal.

Gumsberg is a Volcanic Massive Sulphide deposit. VMS deposits are formed over millions of years by volcanic activity just below the sea floor (ancient sea floor in this case). 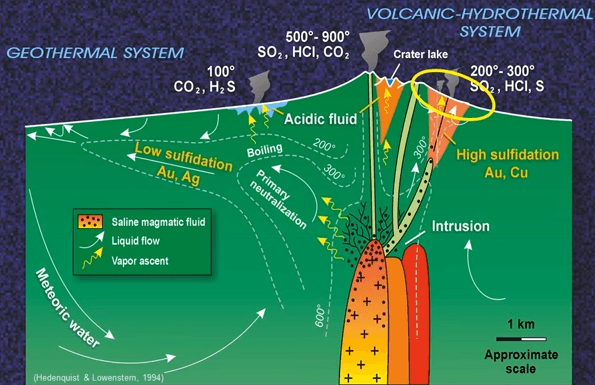 Dominated most often by base metals such as zinc, lead and copper, VMS deposits tend to come in clusters. From an exploration standpoint, that can’t be understated; where there is one VMS deposit, there are often others to be found. Witness the fact that Gumsberg camp has hosted thirty historic mines so far.

Gumsberg is a classic VMS setting with numerous drill targets waiting to be to tested.

The project is located in the world-class Bergslagen mining district between the past producing Falun / Saxberget mines, and the active Garpenberg Mine (Boliden), and Zincgruvan Mine (Lundin) – see map below… 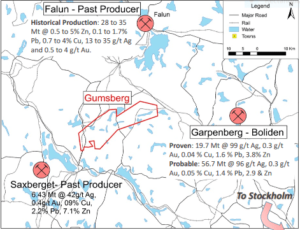 Gumsberg is already creating significant news-flow. What did I say about the company hitting the ground?

Equity Guru’s Stephan Herman provided some insight on drill assays that were released back in late February. There’s nothing like an assay table that reports double-digit zinc, and silver credits measured by the kilo.

Very recent assays out of Gumsberg:

This May 2nd news release was highlighted by two drill holes which returned 3.7 meters averaging 19.27% zinc with 17.25 g/t silver with minor lead and copper in drill hole BM-17-006, and 6.7 meters averaging 7.01% zinc, 0.44% lead and 17.66 g/t silver in hole BM-17-011.
.
Note that three of the holes on this release returned NSR (no significant results). When added to the assays from the February release, the company has a hit rate of 75% – not too shabby for their first round of drilling. Not too shabby at all.
.
(‘Hit Rate’ refers to the percentage of holes that successfully hit measureable mineralization vs those that returned no significant results)
. 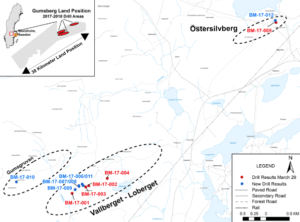 .
Above is a map that shows a few of the high priority drill targets that are currently being drilled at Gumsberg.
Below is a quote from the May 2nd news release chronicling the allure of the Vallberget-Loberget target (above map):

Karl Antonius, President and CEO, had the following to say about this first round of drilling at Gumsberg.

The results of the 2017 – 2018 drill program at Gumsberg have exceeded our expectations, with significant mineralization in 9 out of 12 holes. The best intercepts are in excess of one kilogram per tonne silver with over 45% combined zinc and lead and are testament to the metal endowment of the Gumsberg Project and significantly increases our confidence in its economic potential.

A curious and juicy prospect:

I noted earlier that Gumsberg served as host to thirty historic mines. Most of these mines were waaaaay back in the day, back when there was little, if any, utility for zinc. The zinc was simply tossed onto the scrap heap. And there it lies. Still. It’s just sitting there… waiting to be cherry-picked by a zinc hungry miner, one eager to sell it into a market that can’t satiate its appetite for the metal.

Just how much zinc lies on the Gumsberg scrap heap? No one knows for certain, but many of these dumps are rich in the galvanizing metal. Juicy morsels ya’ll.

By now we should all be well versed in the role Cobalt plays in the batteries used to power EV’s (Electric Vehicles).

Boreal’s current focus with the truth machine (drill bit) is on base and precious metals. These projects are further along on the exploration curve, but the company’s battery metal potential is huge… wide open, IMO.

Historic production from one of the area’s mines, the Skuterud Cobalt Mine, is estimated to have been in the order of one million tons of Co, with significant copper and gold credits.

This is a massive land package – some 13.1K hectares – with approximately twenty-five kilometers of prospective ground to explore.

No modern exploration technology – zip zero nadda – has been performed on the property to date. 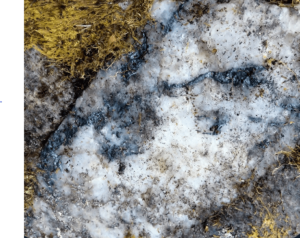 The 2,400 Ha Guldgruvan Project is located near the town of Los, Sweden.  The Project is accessible year-round, with robust infrastructure including paved roads, power, and skilled labour in nearby municipalities.  The Guldgruvan Project contains numerous historical workings, test pits and shallow drill holes in addition to five major mining sites which were the focus of historical production.

The Guldgruvan land position contains the historic Los Cobalt Mine, one of the better known historic cobalt producers in the region, and is also the region where nickel was first discovered and recognized as an element in 17511.  Cobalt, copper, and nickel were mined on the property in the 1600’s to 1750’s.  In addition to these metals, gold, silver, zinc, and lead are also present in zones of mineralization.

Super solid management. A bevy of geologically prospective projects in an extremely mining friendly jurisdiction. A mix of base, precious and battery metals. Steady news-flow. 26,060,000 million shares out (32,195,000 fully diluted). Cheap. Seriously… what’s not to like?

Full Disclosure: The author does not currently own shares in Boreal Metals Corp.