Today the big banks started to raise mortgage rates, without waiting for the Bank of Canada (BoC).

RBC is going up 15 basis points, and TD is going up 45 basis points. The era of cheap money is coming to a close, and the smart investor needs to prepare for potential fallout and opportunities.

The big players saw this coming already. In my last ‘Eat My Shorts’ column on the activity in the Canadian short-selling markets, the clear story was the big short bets against the bank.

Looking at the mid-month data, the biggest short positions are all bank stocks. 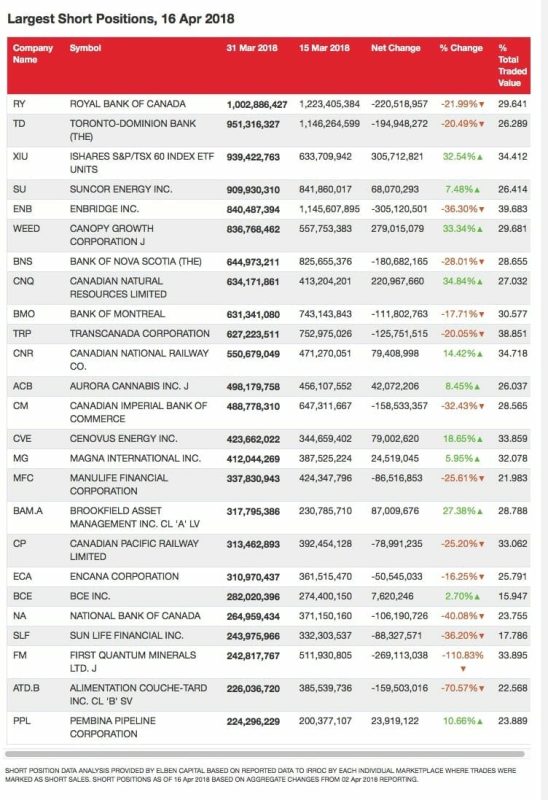 The positions on the board are in lockstep with the market caps of these companies. To me this is a clear sign of a bet against a sector, not picking off targets. All the major banks sitting like fat little ducks one one side and, on the other, vast amounts of money betting on a big fall.

Where could this exposure be?

Canadian real estate is a very large part of the modern economy. The insane valuations in Vancouver and Toronto are the outsized boils sitting on a much larger potential problem. All levels of government are putting policy in place to cool down a market fueled by low interest rates and a cycle of speculation, flipping, and money laundering.

After multiple interest rate hikes in the U.S. and the BoC getting ready to hold its nose and follow suit in July, the banks pulled the trigger now in an attempt to rip the band-aid off all at once. Cheap money is done.

The big fear here is if the music ends, will there be enough chairs for everyone. If not, we could be looking at a replay of the U.S. Housing Crash.

In 2008, when the U.S. Real Estate market melted down, everyone pointed to Canada and said, “See, their banks are regulated. They wouldn’t get caught in the same trap.”

Looks like we done made exactly the same mess.

The Canada Mortgage and Housing Commission backs many of these loans, but a grey market of credit unions and other really shady brokers provide the sort of risky loans we saw in the U.S. in the 2000s.

According to CMHC’s plan, and it’s a beauty – it took me a lot of time and effort to parse out any actual information – CMHC holds $504m in loan guarantees and $13m in available capital. It also has $23m in investments. If a wave of defaults hits, CMHC will have to liquidate those, plus the federal government will potentially have to use taxpayer money to cover the losses.

The scary prospect is a large group of ‘homeowners’ who are professional real-estate owners, enjoying lines of credit, and disposable income based on the value of their house.

In reality, this is fuelled by cheap money and a historic stretch of low interest rates. A return to historical levels means a lot of house-rich people may find themselves underwater if values drop and mortgages are higher than the value of their house.

Then the banks and the economy have a big problem. (all the charts below and more awesome ones can be found with more context over at macleans.ca) 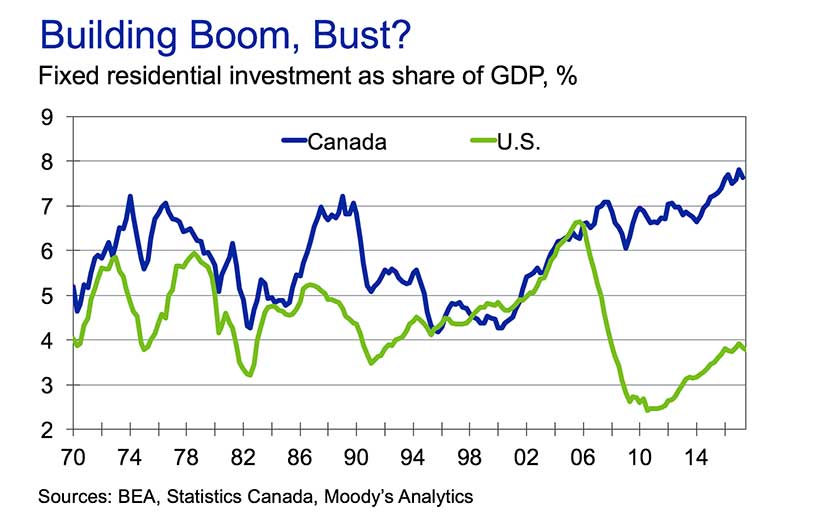 If Housing goes kablooie, that’s an 8% hit, and we’re into recession territory. Small caps will get pummelled, and the big short people will laugh all the way to the offshore banks as they pocket their profits.

Of course the million dollar question is, can we see it coming? If I could answer with certainty, I wouldn’t be writing for a living. But it doesn’t look good. 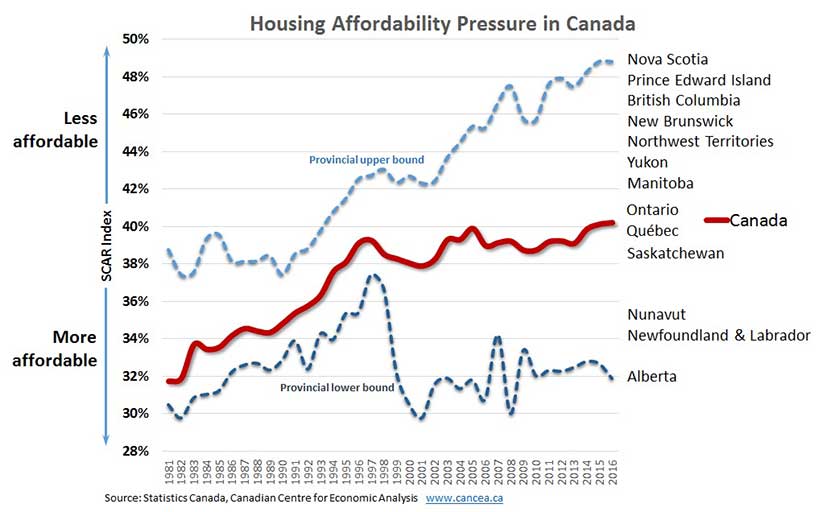 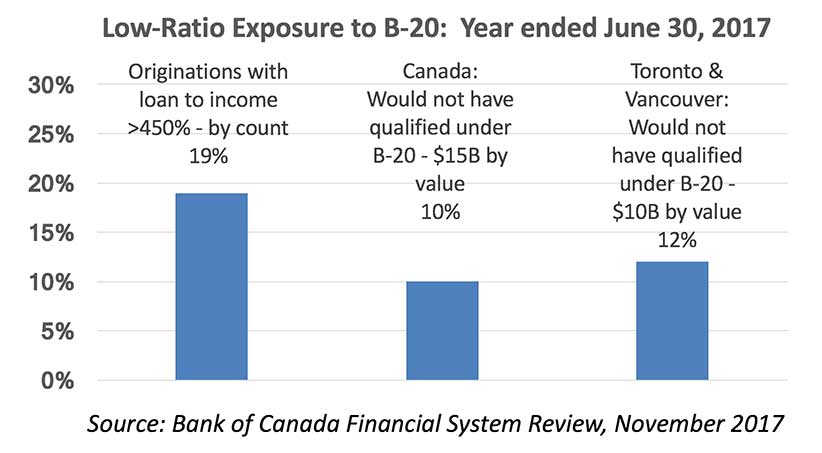 New rules = a market primed for a tumble. The final trigger could very well be a Bank of Canada rate increase.

Once the correction starts, there will be a big selloff as everyone is scrambling to finance the increased cost of housing.

1. Be ready before that happens

2. Start thinking about the stocks and companies you want to buy on the cheap when the opportunity presents itself

Bad money chases out good, with shady loan and mortgage brokers taking the place of the banks to service risky customers with loans on houses they can’t afford. The banks are already very exposed on real estate. Even the ‘Big Short’ guy says Canadian banks could be screwed, if we have a hard real estate correction.

“In Canada, there’s some pretty good evidence that the housing market is finally starting to turn over,” [Fund Manager Steve] Eisman said in a Bloomberg TV interview in October of 2017. “Canada is not going to crash, but it hasn’t had a credit cycle in 25 years. I think they’re about to have one.”

In 2008, I was a newlywed and broke and wished I had the capital to get into the market, as the carnage continued. If I had bought a nice diversified portfolio of sold companies at fire sale prices, well – I wouldn’t have to work here. I’m not going to make the same mistake again. If the storm does come, I’m ready to surf it’s edge. Are you?

One thing is sure, something is going to give somewhere, and whether its a soft or hard landing in the real estate world, the Canadian Banking industry is going to likely take it right in the shorts.

3 taxi-drivers in 3 countries talk about money

Bank of Canada Hits Snooze (and is a Snooze), But You Need to Stay Woke