Volatility. It’s in the air.

Global markets are reeling. Commodities – the building blocks of society – are inflating. Oil is on a tear. For whatever reason, gold remains tethered.

Gold has been bouncing around between the low to mid $1300’s over the past four months. It appears to want to go higher. 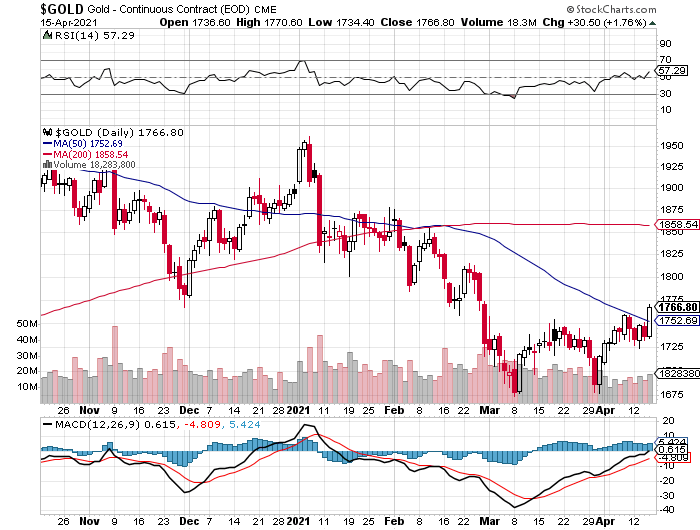 Technically speaking, I view this four-month trading range as price compression – the proverbial coiled spring if you will. The longer gold is held in this narrow range, the more powerful its push higher will be when it’s finally turned loose.

It really wasn’t that long ago when this most precious of metals was flirting the $1,900.00 level. I suspect she’ll flirt with those levels again.

The fundamental dynamics underpinning gold have been well covered here at Equity Guru. In this current global environment of out-of-control money printing, rising interest rates, accelerating debt levels as a consequence of said rising rates, higher inflation, not to mention a global trade war that appears to be in the very early innings… gold is a no-brainer here, a slam dunk (authors humble opinion).

Of course, timing is a tricky one, but we’re looking for a generational move here, not a short-term trade.

We think it’s coming “sooner rather than later”. Yes – there’s some vagueness baked in there (we’re geniuses – not clairvoyants).

The weakness we’re currently experiencing in the junior gold exploration arena reminds me of the market I toiled in during the late 1990’s/early 2000’s. This was one of the sectors low points, a stagnant market, a cesspool of hapless entities that couldn’t catch a bid if their shares went on sale 2 for 1.

Companies with ounces in the ground were trading at sub $5M market-caps when they should have been trading closer to $50M. I see similar apathy in the junior sector today.

The door to opportunity:

Many gold stocks covered here at Equity Guru, I’m convinced, present a rare opportunity to buy dollars for dimes, nickels even. That’s my opinion. But I’ve seen this movie before. 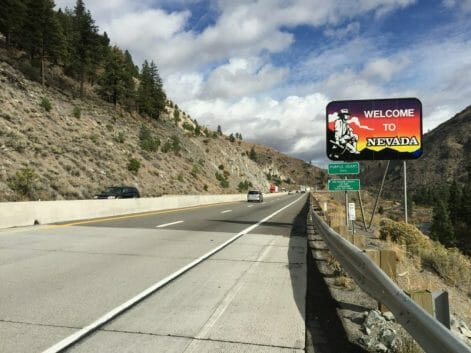 Introducing a rare bird: Blackrock Gold (BRC.V). Though the company has been around for a few years, it’s recently been cleaned up, rejigged, reinvigorated and reintroduced.

The company’s flagship project – a recent acquisition – is the Silver Cloud property, a large, 4,537 hectare chunk of terra firma strategically located near the confluence of the Carlin Trend and the Northern Nevada Rift of north-central Nevada. This is THE premier gold mining district in North America. It certainly claims top spot as the richest.

Schifrin, having worked as a geologist and manager for over thirty-five years in the mining and mineral exploration sector, spent much of his time focused on Nevada in the 1980’s and 1990’s.

Schifrin actually worked on the nearby Midas deposit during the mid to late 1990’s.

On Oct 31st of 2017, Blackrock penned a deal with Pescio Exploration for the acquisition of the Silver Cloud project.

The terms of the deal require that Blackrock pay Pescio $6.65M over a period of ten years, issue one million BRC shares, and interestingly… commit to the drilling of some 38K meters at Silver Cloud.

Obviously, Carl Pescio – the man behind Pescio Exploration (also the founder of Allied Nevada) – is eager to see this project get the attention it richly deserves.

It’s important to note that Blackrock has agreed to pay Pescio a royalty of 3.5% of the gross value on the sale of all minerals produced at Silver Cloud, should it go into production.

It’s also important to note that Blackrock has an option to bring that royalty down to 2% by writing Pescio a cheque for US $3M at any time on or before October 28, 2022. In the event of a discovery of sufficient magnitude, that $3M will be viewed as chump-change.

On March 22nd 2018, Blackrock announced that it received final acceptance from the TSX Venture Exchange for the Silver Cloud project.

The Significance of the area:

The Silver Cloud Project deserves a certain degree of reverence. It resides in an area that is home to some of the richest (and largest) gold deposits on the continent.

The pic below shows a cross-section of some of the deposits within close proximity of the project. 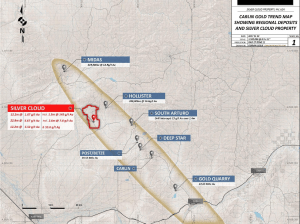 The Silver Cloud Project lies in close proximity to the Hollister and Midas gold mines. This is a rather important detail as both mines, owned by Klondex Mines Ltd (KDX.TSX), were very recently taken out by Hecla Mining Co (HL.NYSE) at a 59% premium to Klondex’s 30-day volume-weighted average price.

The closing of the Silver Cloud deal and the announcement of Hecla’s takeover of these nearby mines came literally days apart. Fortuitous. Right place… right time.

Opportunities to acquire significant land packages along Nevada’s prolific gold trends are very rare. Rarer still are for these land packages to have the highest grade mines in the U.S. and this transaction is consistent with Hecla’s strategy of owning large prospective land packages with mines where we can improve costs, grow reserves and expand production.

I suspect Hecla will be watching developments over at Silver Cloud very closely. Success with the drill bit will put Blackrock squarely in Hecla’s crosshairs.

A dollop of history:

In 1998, Carl Pescio staked Silver Cloud. He immediately leased the project to Teck Resources Ltd (called Teck-Cominco at the time). From 1999 to 2001 Teck drilled a total of 4023 meters in ten holes on the property. In late 2002, Teck joint-ventured the project to Placer Dome who drilled 3,832 meters in eleven holes.

An element of mystery:

Teck’s initial drilling led to a discovery of 1.5 meters grading an impressive 145 grams per ton gold.

Both discoveries can be seen on the map below.

The Silver Cloud Project has been sitting in purgatory ever since. Neither of the above discoveries have been followed up with additional drilling (this little detail should get the speculative juices flowing).

These discoveries – significant by today’s standards – were made at a time when the gold price was a mere fraction of what it’s currently trading at today. And like today, gold shares – particularly the junior explorer’s – were on no one’s radar. They were barely treading water. 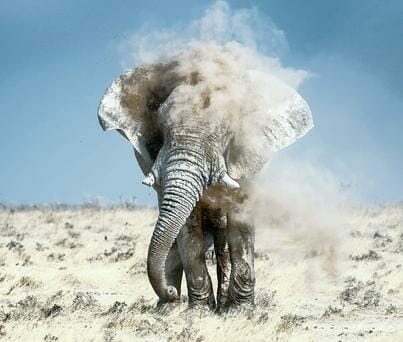 Silver Cloud is 4,537 hectares of some of the most geologically prospective terrain on the continent… terrain that has yet to see a proper probing by modern exploration technology.

From a recent interview with my friend Peter Bell, CEO Schifrin had this to say about the project:

One of the most appealing things for Blackrock is the address of the Silver Cloud project. People say, “You’re hunting elephants in elephant country.” And they’re not wrong. This is an area that is prolific with extremely large gold deposits. If we were 100-150 miles to the east or west, then we might be in a different part of Nevada with some gold occurrences but it wouldn’t be the Carlin Trend. That’s a statement in and of itself, isn’t it?

For those who know rocks, Red Cloud is a low-sulphidation epithermal Au-Ag banded vein type deposit. 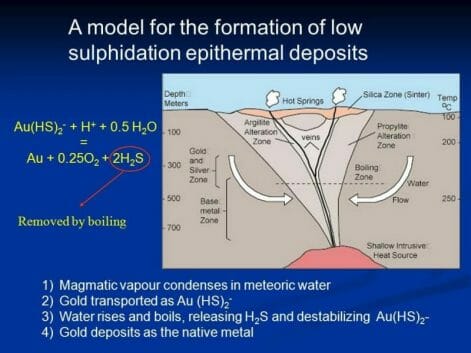 For those who require an assist, epithermal deposits are rather fascinating:

If you’re a fan of natural hot springs, you’ll have an appreciation for epithermal’s.

Basically, low sulphidation epithermal gold deposits are created when groundwater comes into contact with hot molten rock deep below the surface. Silicate minerals – rock forming minerals that make up approximately 90% of the Earth’s crust – are dissolved along with metals like gold, silver, arsenic, lead, zinc, etc. This super-heated enriched groundwater, aka hydrothermal fluids, moves through cracks and faults in the surrounding rock. As the fluids rise toward the surface and cool, gold drops out and collects in a series of veins.

Not a lot is known about the actual epithermal structure at Silver Cloud due to the fact that its surface has barely been scratched – it has received only a minimal amount of drilling over the years. It is believed, however, that it shares some common geological characteristics with the nearby Hollister and Midas mines.

A proper series of deep pokes with the truth machine (the drill bit) will turnover more pieces of the puzzle. 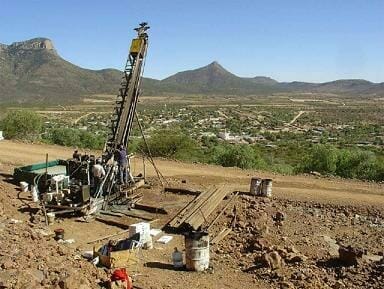 CEO Schifrin and his team recently re-plotted all of the data compiled on the property to date. Their aim: to develop a conceptual model of the project, one which will give them a better feel for the lay of the land.

After visiting the site and selecting drill pad locations, they’ll submit their permit applications. I would expect that the application, if it hasn’t already been submitted, will be sent off any day now.

The approval of their permits is expected by early August. By then, they’ll have their drill targets prioritized. Mobilization of a drill rig should follow soon after.

It’s important to note that the company will need to raise additional funds to launch a proper drilling campaign. The amount of the funds required will depend on the number of meters they plan to drill during this first round.

These are exciting times for Blackrock. Very few companies can boast holding a project with the pedigree of Silver Cloud.

Looking under the hood:

Not understanding a companies market capitalization (how a company is currently being valued by the market) is like walking into a store and shopping for items not knowing their prices.

By taking the number of outstanding shares and multiplying that figure by the current share price, we can see that Blackrock currently sports an accommodating market-cap of $4.2M Canadian dollars – ‘accommodating’ in the sense that this appears to be ground level. Exploration success should be well received by the market via a dramatic push higher.

This is always a tricky one. There are no established reserves or resources at Silver Cloud. Yet.

There’s no point in crunching numbers or attempting to extrapolate trends here. It’s pointless. Insufficient data. Even with the highly prospective nature of the region, Blackrock is still somewhat of a loto ticket. It’s a drill-hole play.

Having said that, this is the sort of speculation that experienced investors in the junior gold exploration arena gravitate to.

The address, the close proximity of nearby high-grade mines, the two high-grade discoveries on the property, the recent takeover of Klondex by Hecla… all of these elements serve as compelling clues. They add validity to the notion that the next round of drilling will zero in on a significant high-grade orebody.

An additional bonus clue: the Silver Cloud property once supported a large mercury mine during the 1960s. Those who know their geology understand that mercury is a pathfinder element often associated with large low sulphidation epithermal gold systems. This little detail bolsters Silver Cloud’s discovery potential in my mind.

One additional Schifrin quote stands out in the recent interview with Peter Bell:

I’ve talked to a lot of the long-time associates in Nevada who’ve been working there for the last 30-40 years and the thing I keep hearing when I ask them about Silver Cloud is, “Greg, you’re not looking for a gold system, you’re sitting on a gold system – it’s just a matter of defining that gold system.” That’s a real positive when you think about properties and exploration work. We’re sitting on something that is already known to be a lot like the Midas gold system.

It’s not often that one can gain exposure to a drill hole play in a geological setting as prospective as Blackrock’s for a little more than a dime – a $4.2M market-cap.

If past drill hole assays (1.5 meters @ 145 g/t Au and 12 meters @ 5.5 g/t Au) are any indication of what remains to be discovered at depth, Blackrock common shares will rock. We stand to watch.

Full Disclosure: The author does not currently own shares in Blackrock Gold Corp.