It’s been on a little rip the last few days while putting out ‘we have no idea why’ news releases, but Hashchain Technology (KASH.V) finally put out it’s reason why today; They’re tossing out a bunch of new shares to bring in 5,000 more cryptocurrency mining rigs.

And when I say ‘a bunch’, I mean they’re adding to their share count by over 50%.

Hashchain Technology Inc. has entered into a binding letter agreement to acquire 100 per cent of the outstanding shares of a company in consideration for the issuance of 55 million Hashchain shares at a deemed price of 35 cents per share (equivalent to $19.25-million).

That’s a whole lot of stock. What’s it getting?

The purchase price will be allocated as follows:

So, basically, Hashchain is doubling its server count and mining capacity, in return for half its stock at a low valuation.

Some are going to call this a Hail Mary.

But is it? Here’s what I wrote about Pat Gray, Hashchain’s CEO, back in November of last year.

Hashchain (ticker in December to be KASH) is helmed by a genuinely affable tech nerd in Patrick Gray, who has been mining crypto currency literally in his garage for a while, after some mega exits from his previous tech startups. His aim is to build out crypto mining capacity at a furious tilt, using networks he already has to acquire the physical server capacity needed, in quick time. Once established across Canada and the US, his data centres will be used to finance what he sees as the real business in a long term sense, which will be software that has yet to be written for industries that have yet to understand they need it, and which will revolutionize how we do business. The mining will be important because it’s actual business with actual revenue, that the market understands. The after-mining will be important because it’ll be infinite upside – eventually.

So this deal is consistent with what the company has been saying is its stated purpose since inception.

Hashchain came out with all guns blazing at $2.25, making many who jumped into the early financing ‘on paper’ rich. But it quickly shunted downwards as crypto mining went out of fashion and blockchain 2.0 became the thing. It’s been as low as $0.025, before a surge over the last week put it at $0.39, good for a $40m market cap. So there’s life in the old dog yet.

But Antminer S9s? The critics will say (and I’m among them) that Antminer S9s, which are purpose built to mine Bitcoin, are a big bet on that currency, and that bet has no ‘plan B’ if Bitcoin dies a nasty death.

GPUs can be used in other places – for video render farms, AI, machine learning, video game hosting, VR/AR, and so on and so on. 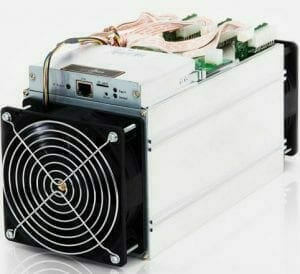 Yep, it’s a giant fan with a circuit board on top. Data comes in and is processed fast and hard enough that it would melt itself and the shelf holding it up without that fan blazing away underneath it.

You can’t use that rig to host a game of Fortnite. You can’t use it to render frames for the next Pixar movie. It mines Bitcoin and that’s all.

Which means, if you love Bitcoin and think it’s the future, this deal is amazing.

If you think Bitcoin is on life support and will be superseded by other tech quickly, this deal is terrible. As I write this, KASH is down 10% on the news, so it appears the detractors are winning.

I do like that Hashchain is active. A lot of their blockchain brethren aren’t, and KASH had recently become a bit of a punchline inside the financial world, by virtue of how hard it had fallen. It’s no coincidence that the recent jump in all stocks in the blockchain space happened while KASH was making it’s move, such is the tendency for retail investors to tie one to all.

But a financing this big, drawing on so much stock, at what is a low price historically, is the big sticking point here.

A tiered deal, whereby they’d have taken 20% of these rigs at a time as their share price rose, similar to how KASH-connected Dan Kriznic drove value at Invictus MD Strategies (IMH.V – sorry, GENE.V) would have brought the positive lift needed over time to effectively lower dilution down the road, while still bringing aboard the target efficiently.

But it’d also be folly to suggest nobody thought of that in putting this deal together.. sometimes the target has other suitors and you just need to pull the trigger.

In addition, the word was out. Around various online messageboards, folks were already talking about ‘who KASH is going after’, and the stock was running in a fashion such that IIROC had given the company the old ‘explain the rise’ demand.

So, chances are, KASH had to make a decision – do this deal now, and take the hit on dilution of the stock, or let it hang and risk losing the deal to others. In that sense, it was probably the right move.

The recent acquisition of NODE40, and establishing of DASH masternodes was good business, but the market didn’t get it. And the fact that they’re mining DASH gives them a nice hedge against the Bitcoin apocalypse.

The market understands this deal at least. And now the company can say it has 15mw of hashpower, so it’s a player.

I hold a bunch of KASH stock and have, at various points over the past month, let my finger linger over the sell button. I’ve yet to pull the trigger on that sale, because I believe there’s a plan here, and because the valuation is so darn low.