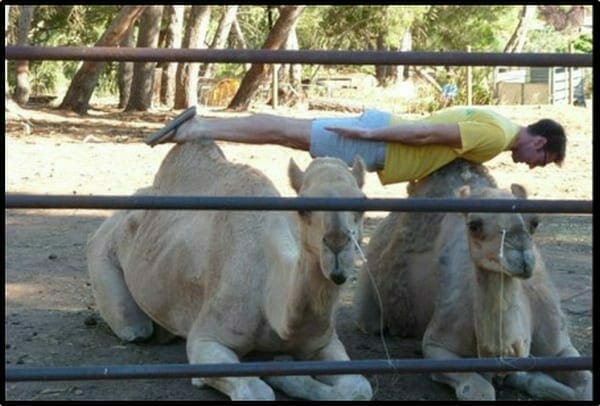 Do you know what else happened in August 2011?

Gold hit an all-time high of $1,917 an ounce.  Over the next 7 years, gold got taken behind the woodshed and kicked in the face – over and over again.

Battered and bruised, gold just stumbled out from behind the woodshed.

It’s pissed off, ready to shake out its hair and kick some ass.

Timing the come-back precisely is impossible.

Anyone who says they can time it is stupid or lying.

We think it’s coming “sooner rather than later”.  Yes – there’s some vagueness baked in there (we’re geniuses – not clairvoyants).

This much we know: the spot gold price of gold is still depressed ($1,330 USD/ounce) making this an opportune time to load up on junior gold stocks.

When bullion explodes to the upside – the junior explorers (with good projects) will go up in multiples.

Ashanti Gold (AGZ.V) is a West African-focused gold development company, run by the CEO Tim McCutcheon, a former investment banker with a track record of finding inefficiencies in financial systems – and exploiting them for profit. 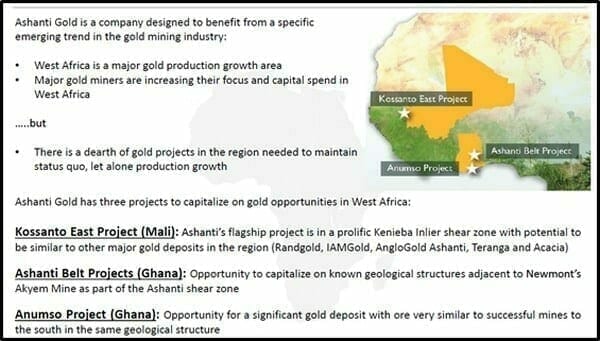 According to the press release, “Net proceeds of the private placement will be used to fund the exploration costs related to the Kossanto East property in Mali, work on the Anumso property in Ghana.”

Mr. McCutcheon is an investment banker who toiled in institutions such as Bear Stearns, Aton Capital and Pioneer Investments.

Before switching teams (from banker to explorer) he wrote analyst coverage of gold companies in Eurasia, including Bema Gold, High River Gold, Centerra, Polyus, and Polymetal.

Successful merchant bankers get up early and get shit done.  McCutcheon and his team have done that.  2017 was the first full year of operation. The accomplishments look like this: 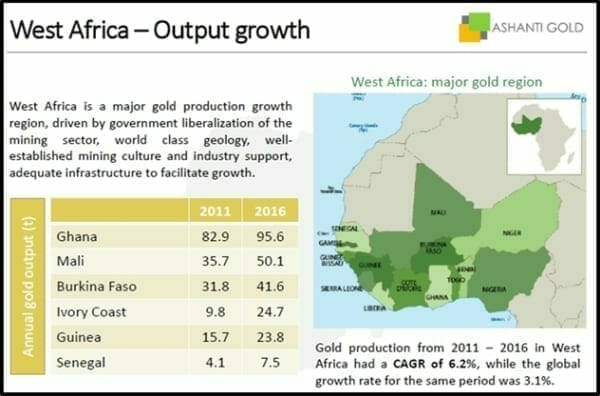 Gold CEOs usually talk about Africa the way skiers talk about Switzerland.  High mountains! Clean air! Powdery snow!  McCutcheon has a more analytical take. As a guy who used to write cheques to gold explorers – he asked himself: “What are the de-risking factors for gold projects?”

McCutcheon does a pretty good job of explaining his acquisition methodology in this video:

Ashanti Belt Project Update (Ghana):  AGZ has the right to earn 100% of Red Back’s interest in the Project by spending a million bucks on exploration over two years.

McCutcheon put together a team that had been Kinross’s JV exploration partner in Ghana.  They had a significant database of experience.  “We identified an opportunity to cherry pick the best assets out of the Kinross portfolio”, stated McCutcheon.

While traditional gold explorers are singularly focused on the minerals, McCutcheon also sees the financial macro-picture – specifically – where the project acquisition money has bottle-necked. 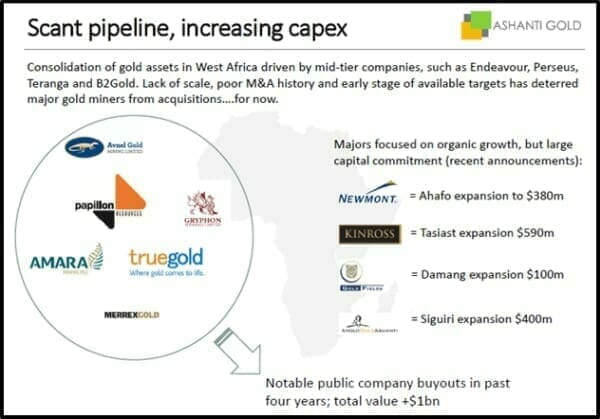 Yesterday, the yield on the 10-year Treasury notes rose to 3%, for the first time since 2014.  That means house mortgages just got more expensive. For corporations, it increases the cost of doing business.

Higher yields on Treasury notes is a push-pull event for gold. Attractive interest rates will lure investors into fixed income investment.  But higher yields also predict inflation.  Your 3% yield is not looking so good with inflation running at 2.4%.  Historically, high inflation causes a run on gold.

There is an old saying in this business: “You get punished more for being wrong than you get rewarded for being right.”  In other words, 9 times out of 10 – an eloquent waffle is a better bet than a bold proclamation.

Full Disclosure: Ashanti Gold is an Equity Guru marketing client, and we own stock.