My former boss used to say, “Horse racing? Why bother? I could just smash my head on a wall, throw red wine on my shirt, burn $500, and save myself a day.”

I’ve stolen his line many times, and will do it again today.

“Invest in Maple Leaf Green World (MGW.E)? Why bother? I could just throw ten grand into the toilet, smear lipstick across my face, and run into traffic wearing a sandwich board that says, ‘Gullible AF, please take my pension.'”

On the venerable Stockhouse website, famous for the pit of vipers that is The Bullboards and editorial content that, seemingly, is now written by the guy who makes the sandwiches at the Freshii downstairs, today’s big news is, “Maple Leaf Green World graduates to NEO.”

And that’s apparently a ‘graduation.’

Stockhouse, baby, you know I love ya but Jesus Christ on a kegstand, this is terrible. I have writers. Call me.

But I digress; Maple Leaf Green World is, how should I put this?

Fair. They were one of those shells that, all the way back in 2015, jumped into the weed market and started talking about how it was going to grow trees in China and weed in BC and crabapples in California or some such, and between then and now has done almost NOTHING other than shuffle paper and pay execs in options.

Oh, the stock grew, that’s a thing. In fact, at a $118m market cap currently, it’s one of the sweetest short selling targets I can think of.

Here’s the thing: Since 2015, that guy doing the Stockhouse editorials made more money at the Freshii than MGW has made as a company. And he’s probably sold more weed than they have.

And he’s probably got the same chance of ever getting a Health Canada sales license.

@NUTH: If you’re looking for a company with no pr/ir, no revenues, no near future revenues, little foresight, an inability to conduct multiple business ventures at the same time opting for a linear roll out, and lastly are the proud owners of a construction schedule/growers & dealers license approval likelihood that will guarantee an inoperable facility on the legalization date, then this is the company for you. If nothing I said tickles your fancy, then stay far, far away.
[…]
There are a few reasons why it’s cheap, in fact maybe overvalued. Aside from having virtually no IR/PR, nobody I’ve talked to has been able to answer the following questions.. What is the status update for the US facilities? What is the status update with the China office? If the BC grow op is half completed, and the dealers license was started mid last month, and keeping in mind it takes 6-9 months to complete, in addition to no growers license, is it even plausible for this company to be ready around the legalization date? If not, when will any of the 3 facilities be in operation?, and when are revenues anticipated? Where are the updates on distribution and branding? Those are a few questions I have not seen answers to. There is so little info, some shareholders are driving to the BC site to take photos.

So we have a $118m market cap company that’s such a good investment that it’s now heading off the TSX-Venture into the loving arms of Aequitas NEO, which, as we pointed out yesterday, has no companies on it other than Nobilis Health and Ether Capital.

The latter moved there yesterday, and appears to have done so because it raised $45 million and is going to buy cryptocurrency with it, which might not pass muster as a business on a real exchange because it’s a stupid idea.

So why did Maple Leaf Green World move to an exchange nobody knows about?

Because the Venture Exchange told them they couldn’t own US weed assets. MGW responded to that by saying, ‘there’s no weed in our place, so it’s legal.’

Which is kind of like saying, “That warehouse that I’ve divided up into cubicles that each have a mattress, a shower stall, and a barrel of condoms? It’s not a brothel until the whores show up.”

Maple Leaf Green World (MGW-V) (“MapleLeaf” or the “Company“) announces that the first shipment of product from its initial harvest has commenced.  Product shipments will continue for the next few weeks and Maple Leaf expects the selling price will be at the high end of the price range previously announced (see news release dated August 29, 2016).

The Company’s second crop has been flowering for two weeks and the plants are now over six feet in height.

That deal subsequently ended with MGW having lost money.

The Venture shooed them off, and rather than go to the CSE, which is normally where Canadian weed companies go when they don’t want to abide by Uncle Venture’s US curfew, they fled to the next level down, effectively moving from Triple-A straight to Single-A, and claiming it’s a ‘graduation.’

Folks at the CSE tell me MGW didn’t call them on the way to the basement. They just hit the ripchord and jumped down the shaft.

I’ve always – ALWAYS – said MGW was a terrible company and I’ve been right in every respect on that over the last three years.

Well, except on one item; Share price. The markets have rewarded MGW for simply existing and making promises that, to date, nobody has called the company on.

They claimed in 2016 to be ‘growing cannabis’, though the deal was actually to allow a California pot collective to use their greenhouse to grow their own product, in return for a share of the end tally. That set-up isn’t legal anymore, so MGW had to empty the warehouse with money owed.

Here’s a picture of that high tech California grow, that they’re still using on their website now to illustrate their Nevada grow, which doesn’t exist yet. 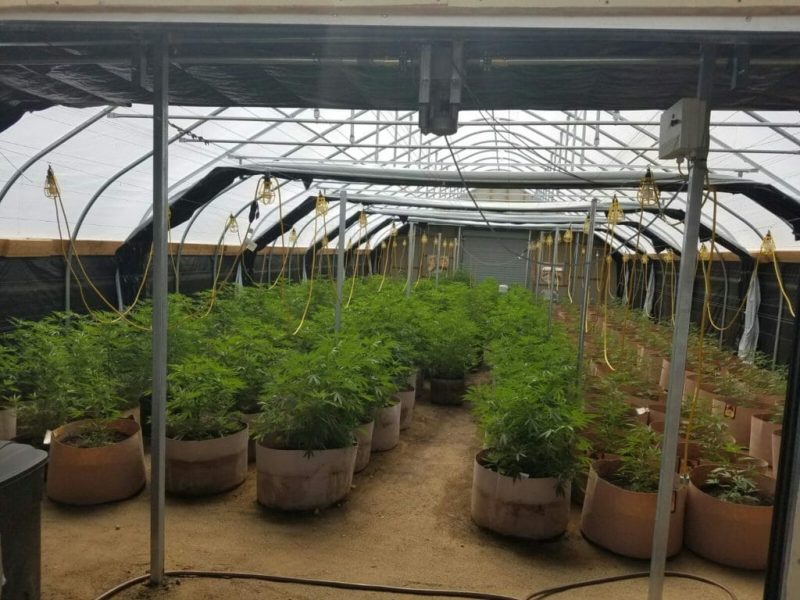 It’d be a damn shame to have to tear apart all that high tech Home Depot gift card-purchased lighting and plastic sheeting.

But the company claims all is not lost – its marijuana grow facility in Riverside California will be legal to grow in May 2018.

Here’s the thing: No it fucking won’t.

This is an outrageous lie for a public company to make. They don’t know what Riverside ‘will’ be in May 2018, only that right now it has banned commercial cannabis business.

Because the prohibition under Ordinance 925 remains in effect today, cultivating marijuana in unincorporated Riverside County remains illegal, beyond the limited exemptions in Ordinance 925 and Prop. 64.

In fact, ask the company itself:

GSGW will continue to own the land and greenhouse facilities in Riverside County for future development purposes.

Riverside County Supervisor Kevin Jeffries, who represents unincorporated areas in the southwestern part of the county near Lake Elsinore, said there would be public meetings during the drafting of the ordinance, followed by a board vote in the spring of 2018.

The board may choose to make it legal. But they also may not. In fact, the county has been aggressively shutting down dispensaries, fighting lawsuits along the way to defend its right to be marijuana-free

But even if they do change their rules:

County voters would then consider new taxes proposed by the ordinance in November 2018.

MGW has been alleged to be shadier than a willow tree down by the river a few times before. Like when they engaged the esteemed consultants at Theracann to help them choose, plan, and build a grow facility in 2017.

Or, rather – they told potential investors they engaged Theracann.

Theracann disagreed, and went to court about it.

TheraCann International Benchmark Corporation, a leading full service international cannabis consultancy (“TheraCann” or “the Company”), has announced today that as of May 29th, 2017 the Company terminated the consulting agreement with Maple Leaf Green World Inc. (TSXV: MGW) due to a material breach of contract. Maple Leaf was served with notice of breach on May 19th, 2017 and had until May 25th to remedy the situation.

The company has stated that Maple Leaf Green World Inc. has not operated in good faith and has failed to fulfill their obligations as pursuant to the agreement including but not limited to; utilizing TheraCann’s reputation to raise capital without fulfilling any commitment to, or intention of, employing TheraCann’s services, misleading Company representatives as to material facts relating to their ACMPR application, and failure to remunerate TheraCann for agreed services rendered.

Like a petulant child, MGW responded with a ‘you can’t fire us, we’re firing you’ three days later.

Maple Leaf Green World Inc. (the “Maple Leaf” or the “Company“) announces that it will discontinue all future business relations with TheraCann International Benchmark Corporation (“TheraCann”) due to billing irregularities and overbilling.

Maple Leaf continues to execute its strategy of diligent deployment of capital, this includes reviewing all requests for payment. Unfortunately, TheraCann’s contractual and invoicing practices are inconsistent with their representations. Accordingly, discontinuation of this business relationship is in the best interest of Maple Leaf and its shareholders.

MGW settled out of court.

Accordingly, the Company’s current Stage 5 Review status demonstrates the Company is now in the final stages of obtaining an ACMPR license.

That was in January 2017. 15 months later, some companies that barely existed when that release was dropped have now got their cultivation license. Maple Leaf Green World does not.

But wait! They have a weed license in Nevada!

Yeah. A guy with a license (but no facility or money) joined their board when his ‘company’ was acquired, and he duly shifted his license to them. MGW has plans to grow, according to their website, “3,265 kgs (7,200 lbs) of dry Cannabis.”

But they don’t have a building to do that in.

In fact, they don’t even have a building permit yet.

Okay. If you got a building permit, and got the money for a building, and expanded that building to 25x the size you’re actually working on currently – YES – you would have 500,000 sq. ft.

But that’s not what’s happening. What is happening is MGW is bullshitting again.

Thankfully, investors don’t appear to be along for the ride anymore. 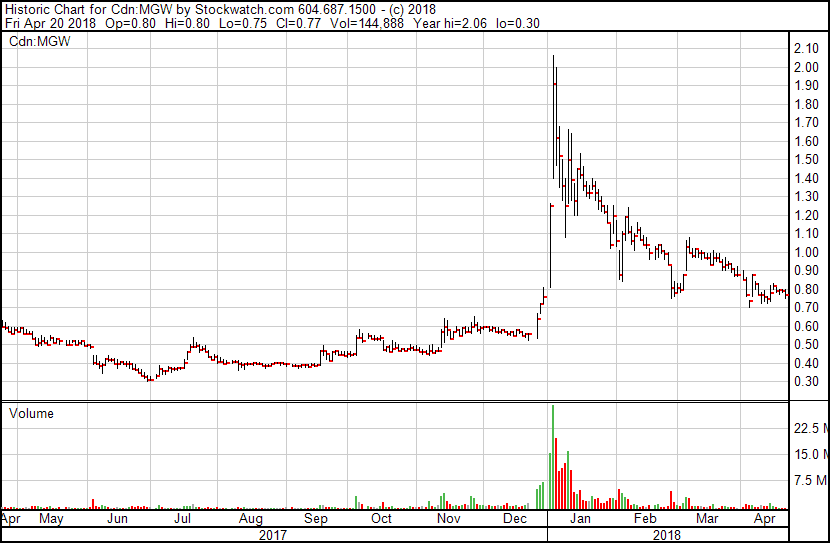 That’s not just a sell-off, that’s a sustained 2018-long sell-off with minor pauses for gullible folks to lose their money in 24 hour increments.

If you’re one of the few, the proud, the unexplainable who are buying into this company, believing that at some point they might do what they’ve never done, and actually start telling a true story, or achieving the things they’ve claimed are coming for four years now, you are the bravest soul I know.

May god have mercy on your roll.

FULL DISCLOSURE: Not in any way, shape or form commercially connected with this company. I’d rather sell oranges on the side of the interstate.