Building a brand and mining capacity – Hashchain Technology (KASH.V) is spreading its wings in more than one sense.

Part of my job is to keep an eye on the news, and online chatter for under-reported news and analysis about our clients and the overall sector. Hashchain Technology (KASH.V) is a client who is off making money so sometimes it flies even under my radar.

Boy is there egg on my face. On Friday, U.S. News World and Report quoted our guy, Patrick Gray, CEO of Hashchain, and I missed it until this morning. It’s a nifty little piece on how crypto is being used in creative ways in the real world.

Here’s what Patrick had to say:

“…Fidelity Charitable revealed earlier this year that it had received $69 million in cryptocurrency donations in 2017 alone. More and more nonprofits and charitable organizations have started accepting digital currency as a way to tap into investors who want to do more good with their money,”

So, having your CEO quoted in a big mainstream publication like U.S, news blah blah is actually a big deal. Once you are tapped a few times, you get filed in every news director binder as ‘Subject Matter Expert’ and it snowballs from there.

By getting quotes in media, Patrick is positioning himself, and by extension Hashchain as reliable operators/experts in the crypto field. There’s a very silly, but very real ‘Oh yeah, I heard of that guy’ effect on markets. Building a brand is a good way to capitalize on that.

Patrick and the team at Hashchain aren’t just out there in the press, they’ve hit some nice milestones, just in the last two weeks.

On March 28, they announced a new benchmark for their mining operations, by mining nearly 5 bitcoin and 4 dash a week. That’s revenue equivalent to $53,642 CAD in one week. Post-cryptodip (thats what I’m calling it now, otherwise I’d have to call it Cryptopocalypse, and then I get confused with Weedpocalypse and then my eyes go crossed)

This new benchmark was hit even before the news on April 4th their newest rigs are now coming online, increasing mining capacity and speed even further. 3,000 new rigs have been delivered, 1/3rd are already online and the rest will be deployed in the next few weeks.

Y’know the numbers above, the $53k in mining revenue? That was with 862 rigs. They just received 3,000 more. These guys are not stopping, they are going for it.

Cryptomining can feel like making money from nothing, you put a bunch of boxes in a room, they do math, you get paid.

The truth is, with volatility not just in crypto trading, but in energy markets, the profitability of cryptomining is based on your ability to be able to do two things. One, have enough smart people to crunch the numbers to make sure you are making a profit as the numbers change – so you know when to 2. Pivot as new opportunities come along.

Hashchain is definitely doing number 1, or it wouldn’t be able to expand. It’s actually making revenue in a straight easy to understand vanilla kind of way. If you want an easy crypto investment which you can explain to folks, this is as basic as it gets. No app, no ledger based transformation of the pet food world. just smart guys working the margins to mine crypto.

They got hammered at the beginning of the year, just like every other crypto stock but note the little jump at the bottom. 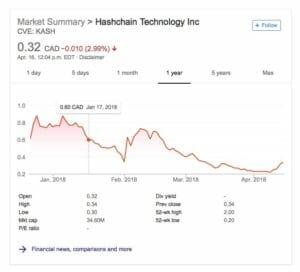 A CEO  who speaks authoritatively about a confusing subject about coupled with solid numbers is an attractive investment. Especially to Joe Retail Investor and Sally CEO.

Even if Hashchain doesn’t float your boat, finding a company with a similar profile is a good goal. If you’re hunting for crypto value.

FULL DISCLOSURE: Hashchain Technologies is a client and the team owns stock. (I would but I have no liquidity at the moment. Which a bunch of people seemed inordinately interested in this morning. weird.) 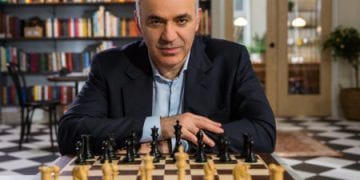 The Coin Collector’s Guide: A grandmaster weighs in, and BCH and Litecoin get the Grayscale bump 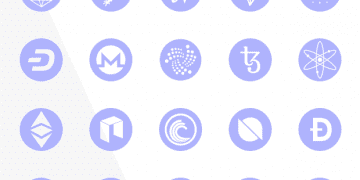