In this world of a 24/7 three-ring circus happening in Washington with trade wars and payoffs growing out the news, it’s important to remember the world is still chugging along. Boreal Metals (BMX.T) is one of our clients, and is chugging along assembling a sweet portfolio of Cobalt and other mineral resources.

While most folks were watching the dumpster fire down south, the world keeps turning, and markets keep going. Huge battery farms are being built around the world, even as America knuckle-drags itself back into the dark age. Those farms are gonna need Cobalt, and Nickel prices are no slouch either.

How do you say profit in Sweden? Mjövattnet and Njuggträskliden (I dare you to pronounce them)

These tonngue twisting names are the two new projects announced by Boreal mining this week. Mjövattnet and Njuggträskliden are project sites in Northern Sweden which Boreal is betting on untapped resources . 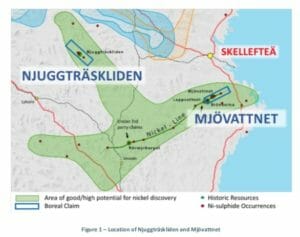 Boreal secured the sites through a deal with EMX Royalty who held the keys to this particular car. EMX will get 9.9% stake in the new subsidiary BEMC which will explore the sties for further mineralization potential. The fact EMX wants a piece of the pie is a good sign.

Boreal is also going to pay an escalating royalty to EMX staring at 20k and ending at 60k/per year. EMX is clearly betting on these projects paying off. The royalties are nice, but the stake could be the big jackpot.

This is what a 5 looks like in Sweden. – What’s in the ground. 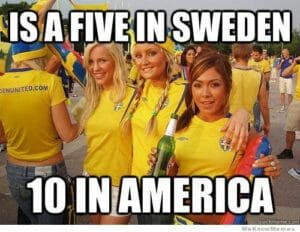 Ok I just wanted to use that picture. The potential according to Boreal is pretty good. First of all, this is another case of looking at old historical mining centres with new tech. It’s a great idea – who knows what’s sitting in old medieval mines considered played out for 400 years.

Here’s what they say in their release:

“The 9,000 hectare Njuggsträskliden and 6,400 hectare Mjövattnet licenses cover multiple drill defined zones of nickel-rich sulfide mineralization. The Projects were recognized during a nationwide reconnaissance exploration program for nickel conducted between 1968 and 1984 by the Swedish Geological Survey (“SGU”) and other government entities. This led to the discovery of nickel mineralization at Mjövattnet in 1971, followed by the discovery of Njuggträskliden in 1974. More than 80 nickel occurrences were identified during the reconnaissance programs, with state funded drill programs defining multiple historic mineral resources. Mjövattnet and Njuggträskliden contained some of the highest average grades of nickel of the resources that were defined in the 1970’s and 1980’s. “

They go on to say there’s been a 20 year effort to map out potential strikes, with several potential promising results. The hope is Boreal’s tech and skill will push the ‘potential’ over the edge into a full on stampede on platinum, nickel and cobalt, with happy vikings singing songs on their way to the mine site.

This news is just the latest in a series of moves by Boreal to secure a nice portfolio of Energy Metals. The world is finding the renewable energy economy to be safer, better and cheaper than old school fossil fuel.

The limiting factor is electricity storage. Barring a black swan type dealie in energy storage big battery farms are where it’s at. Those beasts are gonna need a lot of cobalt, graphite and other commodities and Boreal is making sure they have the keys to some tasty sources.

FULL DISCLOSURE: Boreal is a client, and some of the team own stock. I do not.